Sea monsters, storms and other tales…. 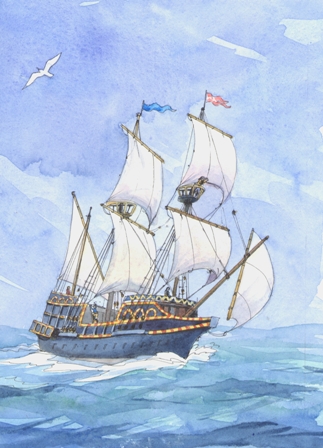 On the drawing board at the moment is painting of Francis Drake’s Golden Hind and the beginnings of a map of the world showing Drake’s round the world mission as official pirate and Spanish loot-stealer. This is where I need some help from younger readers; I’ve started to write (and draw) a book about true adventures of the sea. The title will possibly be Tall Tales for Short Sailors or maybe Bunkside Book (what do you think?). It will be for sailors and non sailors, anyone who finds the sea an exciting place!

Stories so far include ancient explorers, ghost pilots, abandoned ships, shipwrecks, pirates, buried treasure, bumbling admirals, sea monsters and a few more modern adventures including racing yachts, dismastings and storms. If anyone knows of any stories that would be good to put in, let me know (as long as they’re true!). Travelling across oceans is a lot safer now than it was in the early days of explorers, but it’s still a place for mysteries and adventures……

It’s giving me a lovely excuse to do plenty of research (another world for curling up by the fire with a cat, a glass of wine and reading books about storms, shipwrecks and other wet stuff!)