Normal people decide they want to do for a living.  They then go and find out how to do it, do some training, go for interviews or pitch for work, and then spend their productive years putting it all into practice.  And, ideally, getting paid for it.  It’s entirely logical, but I’ve never quite managed it, having come at all my career choices the wrong way round – by doing first and learning second.  A student studying illustration at art college emailed recently, asking for tips on how to make a career out of illustration.   “Do everything that I didn’t do”, was the only advice I could give, having drifted into an artistic career almost by accident.  I didn’t know I wanted to be an illustrator until I already was one and suddenly noticed that being paid (occasionally) for sitting on a chair doodling and colouring in was quite enjoyable.  Being an author, too, was not something I aspired to before being asked if I could also write the series of books I was initially being commissioned to illustrate.   (Well I wasn’t going to say no, was I!)

The only drawback with stumbling into your career choice through the back door is that you feel like the person who sneaked into the party through the kitchen because they weren’t on the official guest list.  Ah well, blagging has got me this far in life, so it will do me for a bit longer whilst I carry on swotting up on the real skills I need to join the party properly!   I’m a great believer in the power of learning on the job, especially as the more your learn, the more you realise there is to know.

Which is why I’m off to a conference in Winchester in a couple of weeks’ time for Childrens’ Writers and Illustrators.  Because I think I’d quite like to make a career of it, if that’s quite all right with everyone,  and after six books it’s high time, if not well overdue, to find out what writing and illustrating for children is really all about. There’s an opportunity at the conference for illustrators to exhibit their portfolios, which sounds like an excellent idea. Except for one thing – I don’t have a portfolio.  (see what I mean about doing everything backwards?)  Well…. nobody’s ever asked me for one. An illustrator’s portfolio is what you put all your samples in, your commissioned work, your ideas and sketches so that a client can see how brilliant you are. That’s how the business works, apparently.  Hmm, perhaps I should be asking my art student for advice on how to put a portfolio together.  Better late than never?

In the meantime, one of the side effects of having been immersed in drawing and writing about marine conservation for so long is that there are still sea creatures falling off the end of my pencil.  Not that I’m complaining; it’s opened up a whole new world.  Here’s the pendant I commissioned clever Phillipa Lawrence to make for my jewellery range, inspired by the albatross and the Southern Ocean. 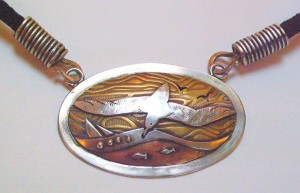 A sprinkling of seabirds and sea mammals then jumped onto the design for next year’s year planner…….. (did I mention that it’s now available from the starfishbooks website?  Just in case you might happen to want one) 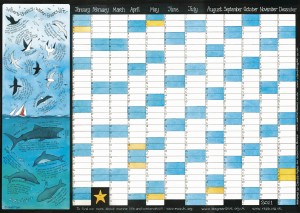 That’ll do for now. I’ll be giving my pencil another shake next week and hoping some boats fall off it as it’s time to tackle The List, which includes a series of Christmas commissions.  Oops, and I need to plan a Christmas exhibition.  Pass me the pencil sharpener and a glass of wine….

« Endings, beginnings and the messy bit in the middle

Ten good reasons to attend a writers’ and illustrators’ conference »