I wonder how and when fizzy wine became associated with celebration.  I always have a bottle in the fridge, just in case (Tesco’s Cava, special offer), and if nothing exciting happens during the year, it gets poured at Christmas breakfast.  But launch parties are the best.  Boats or books, a new one is always worth celebrating.

Whether books or boats, the anticipation of the launch keeps you going during the long hard months of writing and planning, or, in the case of boats, sanding, scraping and varnishing.  But the reality is not always the crowning jewel of achievement that you imagine.  When we finally launched our wooden cutter ‘Torhilda’ after rescuing her from the chainsaw and spending six years and all our savings on a keel-up rebuild, we were exhausted, broke and it rained all day. We didn’t exactly sail off into the sunset; for a start it took another five months to get the mast and spars sorted, but it was still a milestone and the fizz tasted good.  I think we all need to mark our achievements in some way, even if just to prove to ourselves and our friends that we really can see a project through. 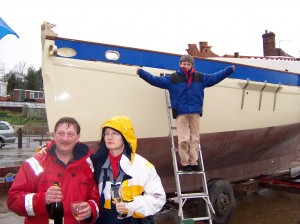 January 2004, Maldon town quay.  Looking stressed because the crane was just about to pick ‘Torhilda’ up… 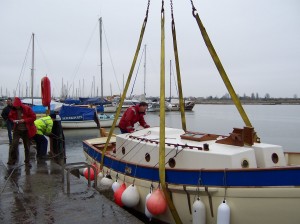 Eight tons of boat safely landed.  Do you think we had enough fenders out??

My first book launch was a huge buzz.  Being a niche market has its advantages – small fish, small pond, which means plenty of friendly faces and hopefully no sharks.  ‘Go Sailing’ was launched at the 2005 Southampton Boat Show in style; local tv and radio, the Olympic team, lots of interviews and a queue of face painted children to sign copies for. Cakes, tea shirts, balloons and of course, fizz.  Isn’t it funny how half an hour of sheer pleasure can balance out a year or so of long solitary hours, frustration, struggle, endless editing and redrawing. 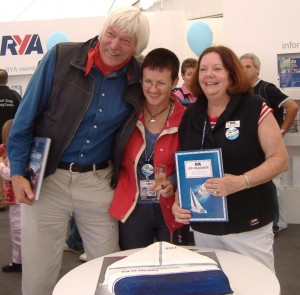 I couldn’t find any photos anywhere of the launch of Go Sailing, so this is the follow up, Go Cruising, September 2006.  Tom Cunliffe really is an impossibly tall person and yes, that cake was shaped like a boat.

Not all launches have gone quite to plan.  I’ll gloss over the one where a tv presenter was drafted in to present the book and did such a good job that my presence wasn’t needed at all – I had to elbow through the crowd to get my half glass of fizz.  Or the one at an outdoor event where it rained and all I remember is a lot of mud, a cup of lukewarm pimms and one book signed.

It doesn’t do to be precious about these things; life rarely turns out as expected.  If it did, there would be nothing interesting to blog about!

The reason launches are on my mind is that there’s a bit of a party for ‘Go Green’ next Saturday (5th March) at the Dinghy Show in London.  I know I’ve mentioned it already, but I’m hoping this is going to be one of the more enjoyable ones.  The RYA marketing team are rallying round, fizz  is promised, and at least there’s no mud in Ally Pally.  There will be hordes of over-excited children, cleverly orchestrated by the dulcet tones of presenter Tracy Clarke. Mike Golding, awesome sailor and staunch supporter of the Green Blue, will be on hand too.   There’s a rumour that Chris Packham, tv’s wildlife expert, may well be around during the day too. So if you’re going to the show, come and say hello.

If you had fizz every day, it would stop being special and high points in life are only high because of all the day to day stuff inbetween.  I’ll try and remember that when I’m knee deep in the next book and spend all my blog posts complaining about it!

1 thought on “Books and boats”