The timing of this post is a little askew as I’ve been gadding around in Cornwall and only just catching up, but this inspired me back in March so it’s going in.  It’s about shipwrecks, teaching, questions and stories, if you were wondering whether to read on.  So pour yourself a glass of wine, sit comfortably and we’ll begin…..

Eight children sit on cushions on the floor of the museum, looking up at a teacher and at the painting of a ship under sail in a glass cabinet in front of them.  It is 18th March, so most have round red noses attached to their face; one of the girls is wearing a bright red tutu.  Sparkly red baubles wobble from headbands as the children nod or raise their arms to answer a question.

The Waterfront Museum in Swansea is modern, stark and dark, a spotlight on each exhibit.  There are buttons to press and drawers to open; disembodied voices tell you about the artefacts with the sound of seagulls in the background.  The painting in the cabinet is of a large steel barque heeling in a rough sea.  This is the Afon Cefni, which set sail from Swansea on 13th October 1894 with a crew of 28 and was never seen again.  A painting of a ship is just a painting of a ship; you glance at it, admire the skill of the artist, the curl of the waves and the curve of the sails, then you move on.  How do you breathe life into these static displays?  How do you unlock them and learn from them? Chris Stephens, teacher and trainer of teachers, has the knack.  He gives the children a few minutes to find the names of five other ships on display.  The red tutu flashes amongst the plinths and cabinets as the children hurry around the room looking at paintings or models.  Chris then reads them his poem featuring all the ships they’ve found, pausing at each rhyme for them to fill in the missing word.  There’s something joyful about rhymes. They soon know the chorus off by heart:

Wrap it up in seawater, wrap it up at sea 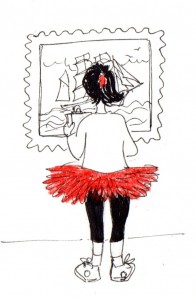 Their next task is to make a collective poem about the Afon Cefni.  The brief description on the cabinet is read aloud and questions are asked – where was the ship sailing to?  What cargo did she carry? Where was she when the storm struck? What happened to the sailors – did they all drown?  The right words are hunted down and Chris weaves them together to make a poem about a fatal storm off Cape Horn that took the ship and all her crew to the bottom of the ocean – by this time the children are keen not to let the facts get in the way of a good story, especially one in rhyme.  The painting has come alive; it’s no longer something to be glanced at before moving on.

According to Chris, the idea of using a museum as a place to trigger creative writing comes from a teaching resource book called ‘Location Writing’ by Caroline Davey and Brian Moses.  What wonderful possibilities – a bit like sketching  in words…. anyway, I digress.  The day at the museum was a workshop for teachers, using maritime history as a theme.  More importantly it was about how to use history, creative play, games and artefacts to improve literacy, understanding and the spirit of enquiry.  I don’t teach children, but I found it fascinating, and it made me wonder why children get all the fun stuff.  Some of the exercises Chris showed us for the classroom would be considered too childish for adult learners, but we all thoroughly enjoyed them and in the context were not afraid to admit it.

Perhaps the most valuable thing we can hang onto as adults is the spirit of enquiry, and finding ways to unlock the story in everything. It would certainly stop us wandering round museums, or through life, in the way that many of us do; skimming the surface, acquiring and instantly forgetting facts.

Facts are not bland and boring; facts are stories.  They are doorways that look dull until you open them. Facts – and artefacts – lead to all kinds of discoveries in time or space, but only if you open the door, ask the questions, engage the imagination.  Next time you’re in a museum, if you see someone gazing at an exhibit and muttering inane poetry, it’s probably me.  I’ll pass on the red tutu, though, even on Red Nose Day. 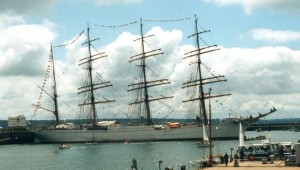 And the Afon Cefni?  She was a steel ship, nearly 300′ long and quite capable of weathering the storms of Cape Horn.  She went down closer to home,  somewhere off the Isles of Scilly.  A teak name board and ship’s lifeboat with the remains of her name on were washed up ashore at St Agnes, but the reason for her sinking remains a mystery.    Four masted barques are, sadly, a rare sight in the 21st century, but the photo is of Sedov, similar in size and rig to the Afon Cefni.  She’ll have a few tales to tell too, no doubt.