More years ago than I care to admit, my flatmates and I discovered sailing.  Being young and impoverished we shared the cost of charter holidays in the West Country, happily ignorant of the fact that a seven berth yacht is not really designed for seven people. We chartered out of season when prices were low, for reasons we discovered by degrees and which failed to dampen our enthusiasm in spite of leaky borrowed oilskins. 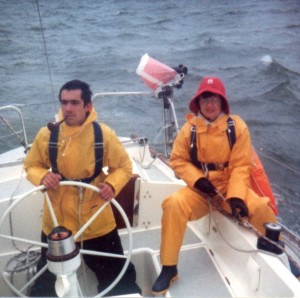 Novice sailors…… yes, that is me with the silly hat on.  Skipper John Watts thought the pipe would make him look more properly salty.

After surviving a few gale-blighted holidays we considered ourselves proper sailors and visited the London Boat Show each year to choose our charter yacht for the holiday to come. The game was to march up to a boat we liked the look of and pretend to be buyers, which fooled the bored salesmen not a bit but gave us immense pleasure. One year we looked over a bilge keel Moody 33 and decided that would be our boat of choice for the next holiday – a choice that backfired when taking the ground against the harbour wall in St Mary’s, Scilly Isles. The boat show model may have been twin keeled, but our charter boat was fin, a difference we discovered when the tide went out and the boat fell over.

Thirty years on and the London Boat Show continues, now in the echoing aisles of Excel, a shadow of the former bustle of Earls Court where the packed chandlery section resembled a Moroccan souk with wellies.  I don’t think you can blame the economy for the decline – sailors still sail, recession or no, especially at the cheap and muddy end of the boating business. I think the internet is partly to blame for the decline, as you no longer have to go in person to a show to buy your discount deckies and the latest gadget for picking up a tricky mooring. You can now do all that online, along with chatting to other like minded souls about whether the latest Mudhopper really can be towed behind a Fiat Panda and whether a Moody 33 sometimes has a fin keel instead of twin.

My son James and I visited the show on its opening day last week.  The main bustle was around the bookshops like the wonderful Kelvin Hughes, where it’s always good to catch up with salty authors Sam Llewellyn and Tom Cunliffe amongst others, and of course there was also a bit of a party going on amongst the wooden varnished boats on the Classic Boat stand.

I did spend money – not on cheap deck shoes or a nifty boat hook, but on a giant blue bean bag.  Not an item to be found on many, or indeed any, boats, but just the job for James’ chair-less room at university.  There was no difficulty carrying it to the hotel, which was across the road from Excel (yes, we really did get a cheap laterooms booking just before coming down – another sign of the times).  The problem began when both of us, along with bean bag, tried to get into the small hotel lift. The lift doors were closing as I shoved and James pulled, but we made it in the end.  I seem to remember that one year ‘The Big Blue’ was the theme for the show, but I don’t think it was bean bags the organisers had in mind!

The beanbag was from www.bigboy.com by the way – very comfortable it is too!

« Wellies in the wilderness…

Sailing on the sofa »