A knight in shining oilskins

Seasickness and vertigo can have different causes, but the symptoms have much in common. I am prone to both, and whilst living on a farm in Wales is a good cure for the former, there is nothing to be done when vertigo strikes except to lie on the sofa trying to stop your eyeballs moving. A recent bout gave me time to reflect on the first time I ever suffered from it, twenty years ago in very different circumstances – but don’t reach for the mouse, this is a sailing rather than medical anecdote…. 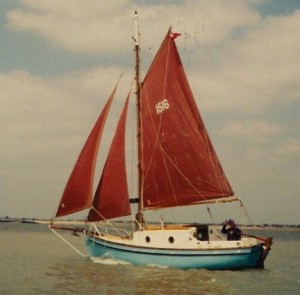 Being alone on a small boat is a bad time to suffer from vertigo. It was definitely not seasickness because the boat was in Brest harbour, tied up safely to a mooring on calm water and, having sailed 400 miles down channel in all kinds of weather, I was at that rare and happy state known as ‘having my sea legs’. Sealegs are hard to acquire, but mine must have arrived sometime along the way because I remember being able to ride the Alderney race at spring tide, on passage to St Peter Port, whilst eating cheese and pickle sandwiches.

Which is why it was an unpleasant shock to wake up on the day before the first ever Brest Festival of Sail in 1992 with the cabin ceiling spinning in dizzy circles above my head. Staying in bed was not an option as I was exhibiting artwork in the British pavilion and this was setting up day.  Stage one involved digging out crates of well packed framed paintings from the deepest recesses of Kitty‘s lockers, a skill akin to potholing.  Stage two was to be pumping up the inflatable dinghy and rowing the heap of boxes ashore, in several loads.  The quayside looked a long way off, and being low tide the harbour wall had a long, weed slimed ladder to climb, not easy with crates that need two hands to lift. Stage three was summoning enough French vocabulary to ask directions to the British pavilion amongst all the bustle ashore, finding the spot I’d booked and then hanging my humble attempts at marine art in an irresistible display.

I couldn’t get past stage one. I sat in the cockpit with a cup of tea, trying to hold my head still and hoping not to be sick.  I’d managed to clear away the foc’sle locker lids and brought out one crate before dashing back into the cockpit for a gulp of fresh air.  There was no-one to ask for help; my crew had left a few days earlier due to work commitments leaving me to do the last and easiest stage alone.

I didn’t turn my head at the noise of an approaching engine – it would have made me too dizzy for one thing, and I had no reason to expect visitors.

A large dory was approaching, with Robin Knox Johnston at the helm. No, I wasn’t hallucinating. The dory came alongside and within seconds my knight in shining oilskins had tied on the painter and jumped aboard.

“Thought you might need a hand,” he said cheerfully.

Within half an hour I was safely ashore with all my crates and Robin sped off in the dory with a wave. It’s rare in life for the wheels to turn and line up so that everything happens at exactly the right time, but when it does, you never forget it. There are sound reasons why a sailing hero had been looking out for me and turned up out of the blue at exactly the right time, but I will be forever grateful for the timing of that act of nautical chivalry. The bout of dizziness lasted the rest of the day; trying to hang paintings when you can’t look up without falling over is a challenge in itself, but the rest of the festival went without a hitch. 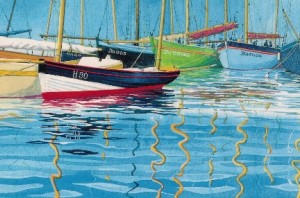 Douarnenez Reflections – the festival inspired a feast of new artwork

Twenty years on, and at least my recent attack of vertigo led to nothing worse than missed work time, spilt tea when the kitchen floor did an unexpected sideways lurch, and the boring necessity to sit totally still until feeling better. It gave me time to reflect that July this year will be the 20th anniversary of the Brest Festival. It’s big, chaotic and unique, and I’ve been lucky enough to attend four out of the five festivals to date. Recession or no, beautiful boats still sail and love getting together, so maybe this year I’ll dust off my sketchbook, try and find my sealegs afloat as well as ashore, and try and get over there.  I’d better make sure Robin Knox Johnston is going too, just in case….

« How do you draw boats? Ask your pencil….