Intrepid sailors are a bit like buses – you don’t meet any for ages and then suddenly there’s a whole succession of fascinating salty coves to blog about. It was my enjoyable task recently to introduce the launch of Shirley Billing’s latest book Passport to Adventure, the third and final stage of a circumnavigation that started off as a three year plan but ended up taking almost 25 years.  Well,  it’s a big world and there’s a lot to see.  What’s particularly remarkable about the final stage of the voyage is that by then the Billings were in their 70’s – and still getting into the kind of scrapes that caused their adult offspring to shake their heads in despair!

Although Shirley and Peter live not far from me in Pembrokeshire, I first met them at London Boat show about five years ago, where we were both book signing.  Shirley takes a robust approach to grabbing the attention of potential customers.  She looks someone straight in the eye as they walk past the table and asks: “Have you ever dreamed about sailing round the world?”  Nobody at a boat show is going to admit that they haven’t at least thought about it, so the usual answer is ‘Er… yes!’  Bingo – and away they go, chatting like old shipmates. I admire this greatly, especially as my own technique is a little less forthright, consisting as it does of gazing into my gin and tonic until someone taps me on the shoulder.

Shirley writes about their adventures with humour and honesty, and all sailors can read between the lines and imagine what the difficult times as well as the good times were like. And there’s one thing we all know about sailing – when it’s good it’s amazing, and when it’s bad it’s bloody awful. Shirley’s assessment of the enjoyability or otherwise of bobbing around an ocean is summarised as follows:

60% a good, satisfying, exhilarating and rewarding way to travel

Sailing round the world isn’t for everyone – but there’s something inspiring about such a ‘can do’ attitude, especially at an age when many people are starting to mutter about ‘taking it easy’.  My son started university recently, and at the boat show beforehand he  received some advice from Robin Knox-Johnston to send him on his way. “Everything is possible – believe in yourself.  If you think you can do something, go for it,” Robin told him, and quoted the Shel Silverstein poem ‘The Mustn’ts’:

Listen to the shouldn’ts, the impossibles, the won’ts

Listen to the never haves then listen close to me

This advice is probably wasted on my son who at 19 is immersed in his computer and/or duvet most of the time, but it went into my notebook – good advice for intrepid sailors of any age as well as life in general.

I’m having a bit of a ‘Seize the Day’ moment of my own this year, so be warned, there will be blog posts during the summer from the nether regions of the river Deben where I plan to seek inspiration amongst the wading birds and houseboats. Though I’ve a feeling my own adventures will fall short of the storm-tossed heroics regularly endured by veteran blue water cruisers; after my first day afloat last week, sailing down the river Orwell in the gap between gales, my ship’s log had only two incidents to report: 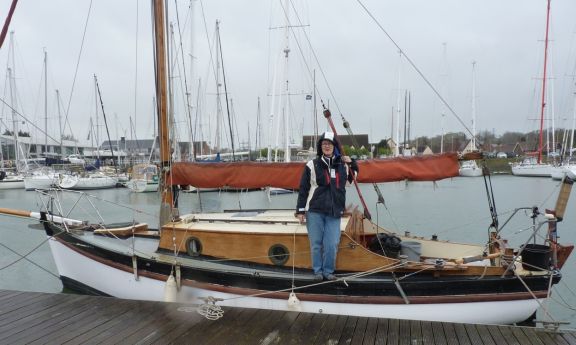 The two items, you’ll be relieved to hear, are not related.  The first turned up safe and well in my sleeping bag, the second involved a moment’s inattention, a coil of wet rope on a pontoon and an unwelcome dip. I now know first hand how difficult marinas are to get out of – even when you have sensible friends, a handy coil of rope, and happen to be wearing a lifejacket with a harness ring. And blessings to small boats with toasty warm coal stoves to dry off next to!

Meanwhile, back in the world of proper seafaring tales, it’s best to contact Shirley direct if you want a copy of Passport to Adventure, as I gather there’s a problem with their Amazon listing at the moment. Her email address is shirpet32@aol.com.   If you’re planning your own escape to the sun, there is plenty of practical advice in the book about the nitty gritty of running a small boat, the delights and perils of the Mediterranean and the joys and horrors of the French canals.  Bon voyage!

3 thoughts on “Passports and possibilities”

If in doubt, add cushions »