My conversation with the signalman who answered the phone from the railway crossing was surreal – but it was late at night and he was probably bored.

Me: Is it clear to take a car across?

Him: Are there any animals involved?

Me: That’s no way to talk about my friends!

Him: Aren’t you the lady who usually says she wants to take llamas across?

Me: Ah! No, that’s Steph. She doesn’t really have llamas, just a sense of humour.

Me: She’s gone to Portugal for the winter to grow olives.

Me: I’d better go. Got a railway line to cross.

Him: All clear if you go now.

Me: Goodnight, nice talking to you.

Meanwhile, my companions (not llamas) in the car were wondering why it was taking me so long to get permission to open the gates. It all comes of living the wrong side of the tracks – the wrong side of the tracks being the shoreward side, and my friends on boats being on the river side of the railway. I’d been spending a girls’ night out  in front of the fire on board Anne’s barge where, inbetween the healthy part of the supper (lentil salad and tortilla) and the unhealthy part (mince pies and turkish delight), the hot topic of conversation was the best way to tie a bowline knot. Frances, who had gamely crewed for me during the wettest and windiest week of the summer, had been brushing up her rusty sailing skills and taken a competent crew course, but had yet to find a reliable method of remembering how to begin that particular knot. The rest of us, of course, all had our favourite methods and confused Frances even more by declaring our own way foolproof. Never have so many rabbits gone round so many trees in so many different ways. 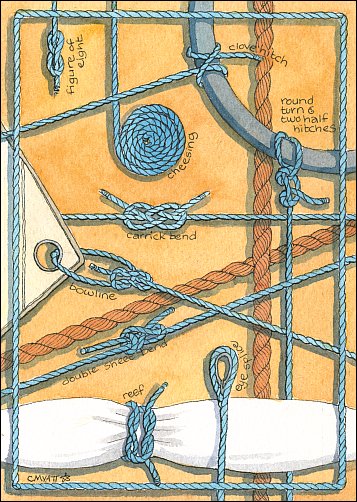 The next morning I handed Frances a piece of rope to see if she could still remember. Three bowlines, all correct, I said, and then you can have breakfast. What a way to treat your guest. She tied them all perfectly.

Frances’ visit had encouraged me into a frenzy of throwing watercolours around in the few days before she arrived, as she had commissioned a painting and I wanted to have a selection ready to choose from. The theme was to take fragments from Tennyson’s Ulysses and work them into a painting something like this…

This is the messy stage, and I had several on the go at once as they don’t always work. With this way of working, it doesn’t do to try and control what happens to the paint – you need to throw it at the paper and then wait and see what’s needed next. 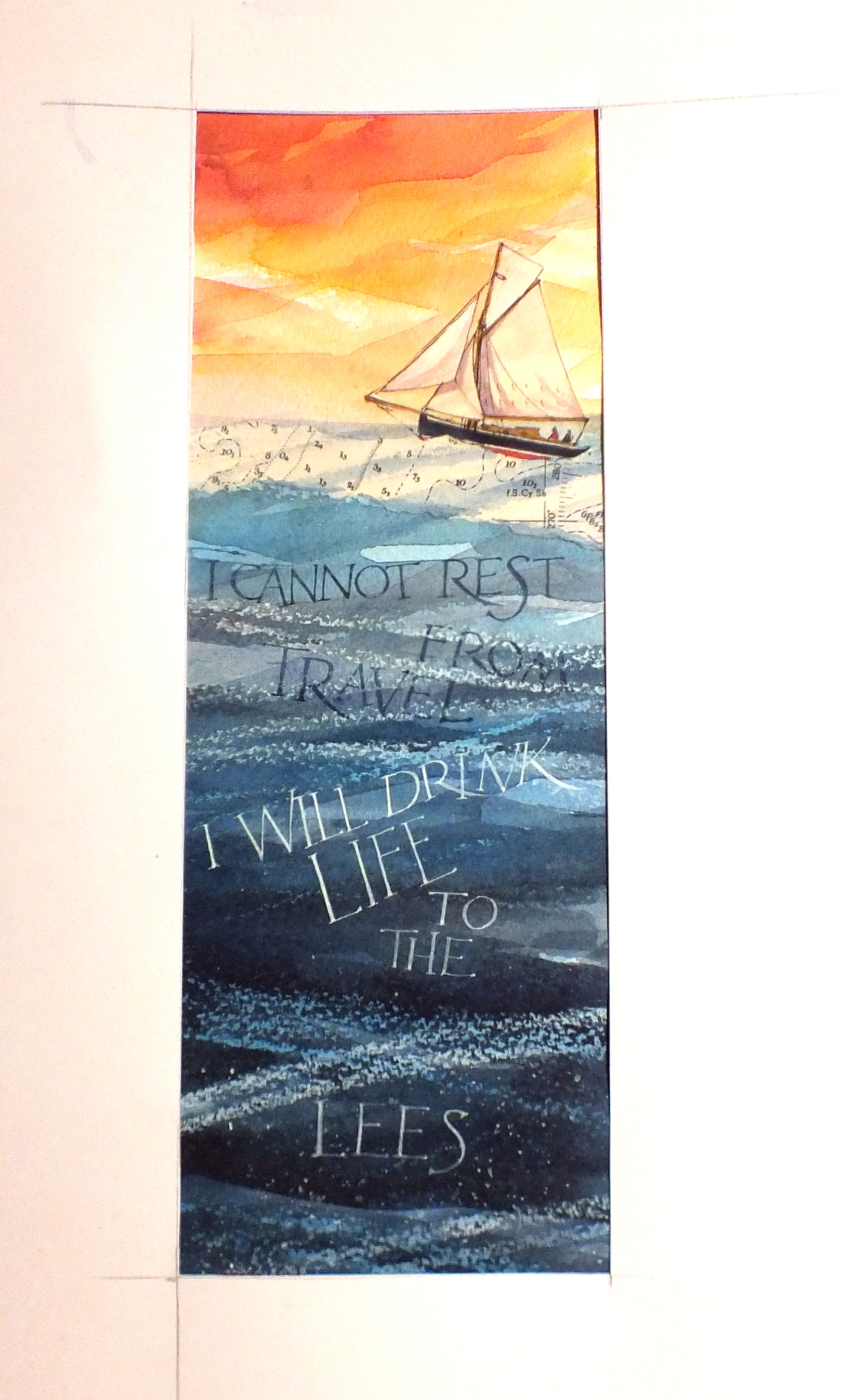 The boat is done on separate paper and stuck on – as is the strip of old nautical chart. Well – why not?

Once you start throwing paint around, the temptation is to keep doing it while you’re in the mood for making a mess. Sometimes it’s good to sneak in a bit of what you want to do amongst all the things you have to do. Here’s the beginning of another painting – a few splodges and a sprinkle of salt…. 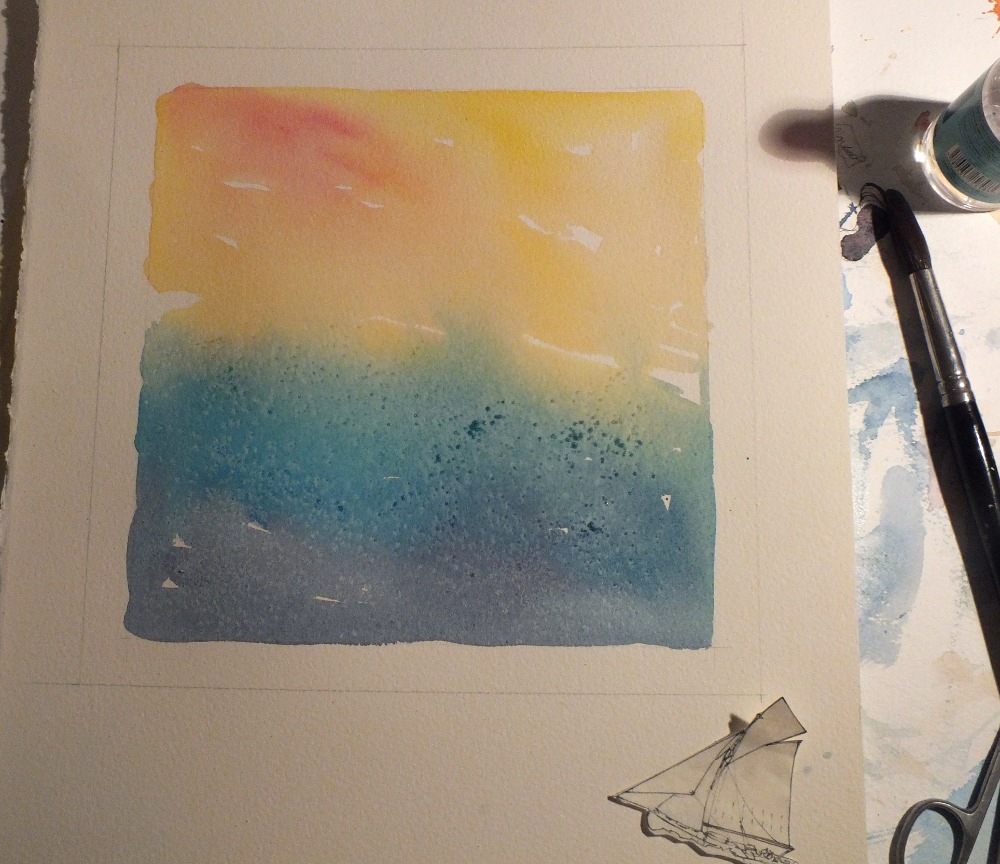 The next stage involved splashing more paint around to see what happened – and of course, there had to be a boat. 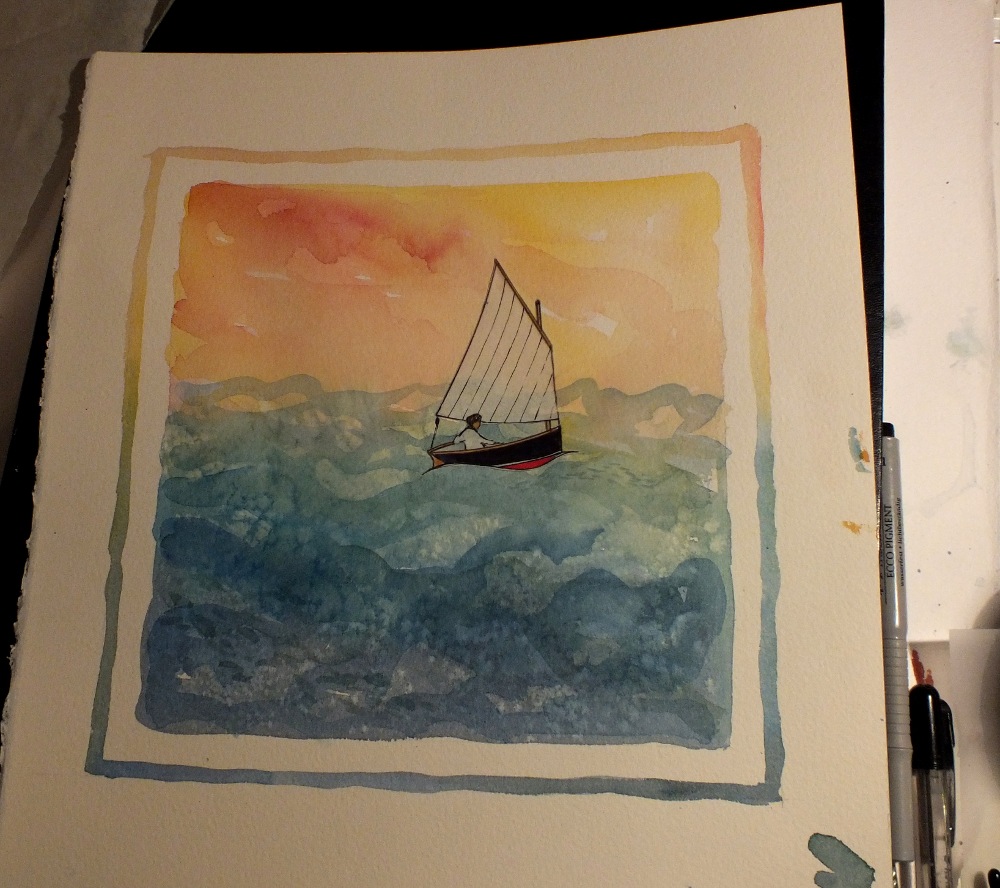 What’s next?  I don’t know, but it looks as though there should be some words, and possibly a few fish. At least there’s the germ of an idea there that didn’t exist before.

And if you’re wondering what all this has to do with the signalman and the llamas, the answer is, not a lot –  but it made me smile, got me thinking about how the best bits of the day can sometimes be the odd moments inbetween the serious business of living – and creativity  can sometimes be pounced upon when it’s not looking. Now it’s supper time and the sun is over the yardarm. Do you think I should ask Frances to tie a few more knots before she heads for home with her new painting?

2 thoughts on “Bowlines before breakfast”