Each summer I try and have a little adventure. It usually involves messing about on the water on other people’s boats, though last year I took my home with me and that turned out more adventurous than I would have liked – remember my ‘stranded in Haarlem’ espisode? That escapade proved disastrously expensive, so this year I left the good ship ‘Else’ safely at home and did some nautical hitch-hiking across the Channel to Brittany. 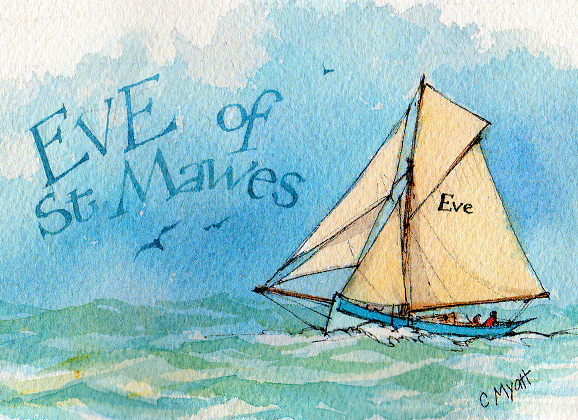 I had a head start this time when Debbie Purser of Classic Sailing offered me the role of volunteer mate on the voyage to Paimpol festival in Eve of St Mawes. Having sailed Eve with Debbie on the art cruises I knew more or less what to expect, and so did she. ‘I can’t cook at sea if it’s rough – I get sick!’ I warned her. The first part of the crossing was lumpy and some of the crew needed the bucket, but later the wind died and the sea calmed down a bit for our sunset supper somewhere mid-channel (Thai chicken curry if you’re interested. Some of the more robust crew – mentioning no names, Liz? – enjoyed the leftovers cold for breakfast).

The main challenge of the crossing was not wind and waves but rain – bucketfuls of it. The sort of rain that gets inside your oilskins and even makes your sleeping bag feel damp. The sort of rain that finds its way below decks even on a boat as robust as Eve, as I found out when I was off watch and asleep in the middle of the night with my oilskins and lifejacket alongside me in my bunk. I woke to a noise and a ‘whoosh’ and the feeling that my bunk was being taken over by something large, which it was; enough water had found its way in there to trigger the gas cylinder on the automatic lifejacket, which had inflated as it is meant to do when immersed in water. For some reason everyone else thought this was very amusing. 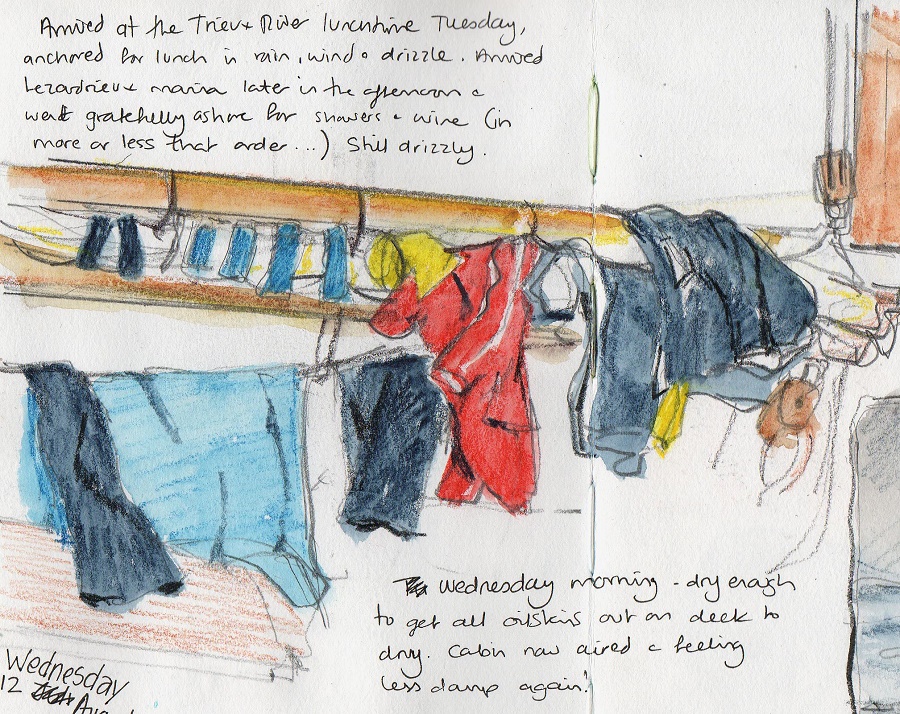 The north coast of Brittany is spectacular – apparently. There was not much of it to be seen as we approached in driving rain with a lively wind astern, but we had a few glimpses of it in the days to come as we sailed in company with other traditional boats from Lezardrieux to Paimpol. 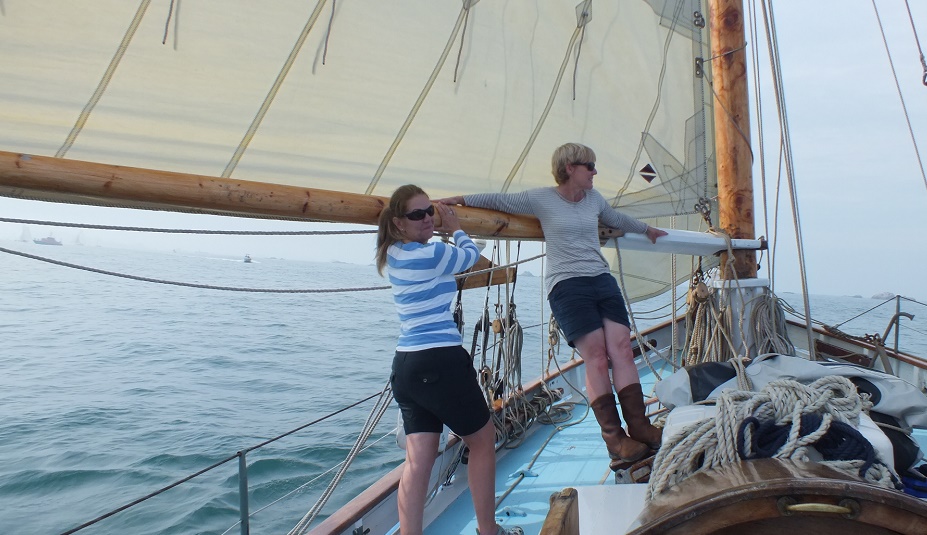 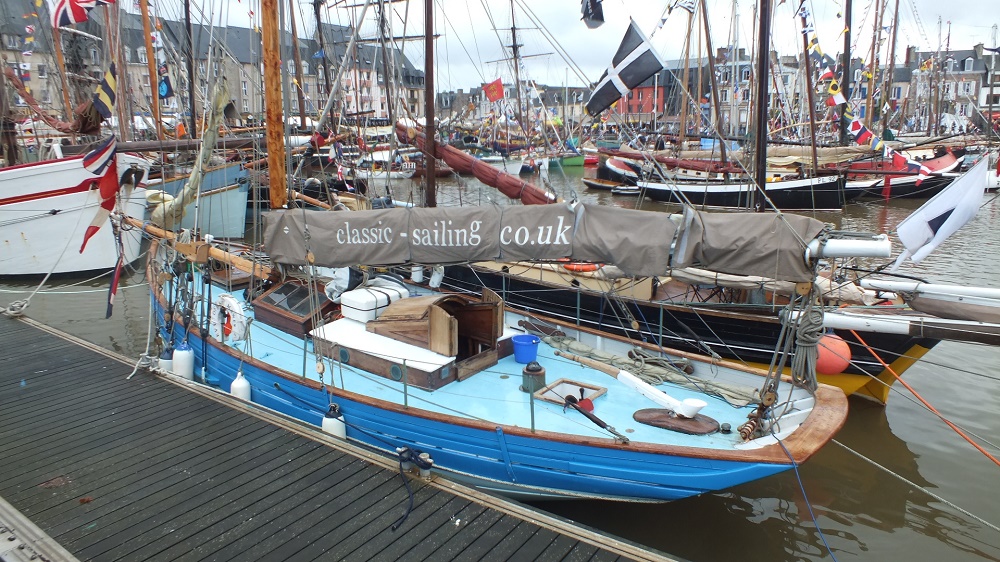 The three day festival itself, billed as ‘Musique des mers du monde’, is exuberant and incredibly varied, all based around the harbour along the quay, on boats, and on six outdoor stages. One minute you’re joining some Breton dancing, the next you’re watching a samba band go by, all against a backdrop of traditional sail. One of the most enjoyable gigs was The Young ‘Uns who are from the exotic port of Hartlepool – check them out if you like amazing harmonies. (I went to my first land based music festival a few years ago. Never having done it I thought it was about time I did, so I went to Folk East as it was close by. Ah, I thought, so it’s like a boat festival – but without the boats! There was grass where the water should be…. and tents to sleep in instead of a nice cosy cabin.) 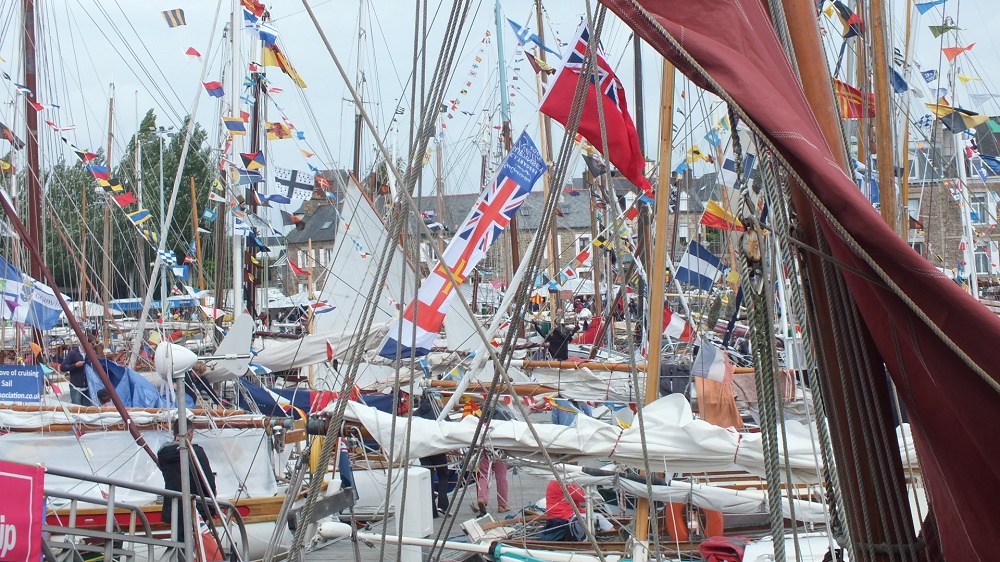 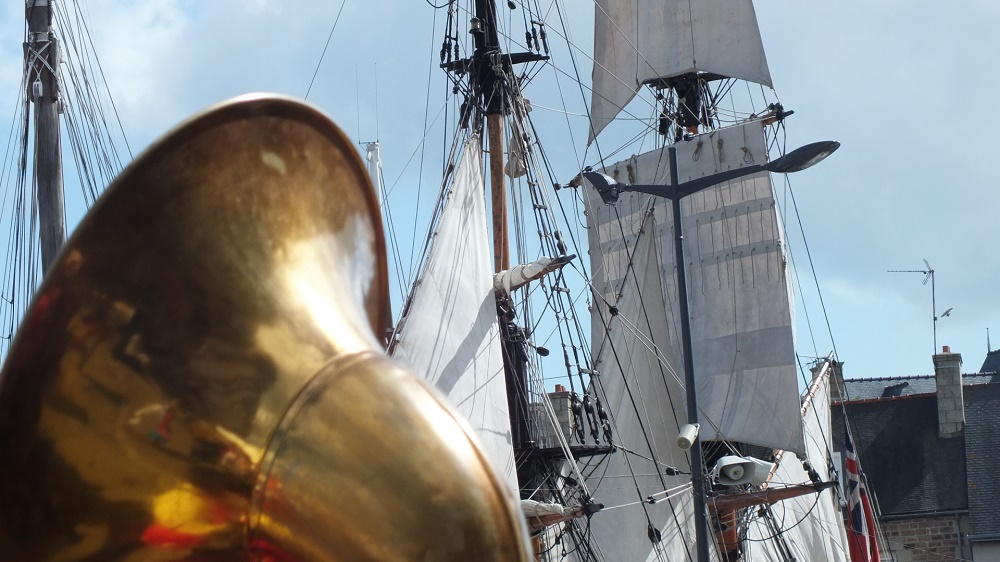 Talking of cosy cabins, my first task at the festival was to find a way of getting home again, as new skipper, crew and guests were taking over Eve on Saturday. I needed somewhere to sleep Saturday night and hopefully a passage home. I started asking around the boats I knew, then luckily was offered a berth on the lovely gaff ketch Donna Capel from Falmouth, a boat I first came across in Brest a few years ago. That was a stroke of luck – I had found a bunk, a passage home and good company all at once, so I moved my gear across, started to get to know my new shipmates and was free to enjoy the rest of the festival.

On Monday morning it was time to head for home. The weather this time was calm and sunny so it was motoring all the way, taking my turn on watch and getting used to the steering and routine of a new boat. 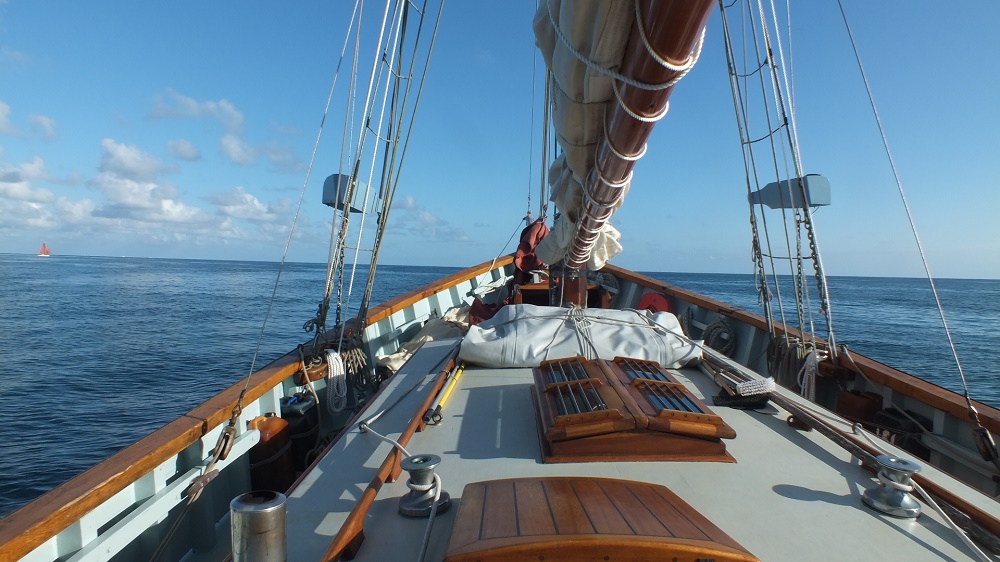 There was the usual busy shipping to avoid, and a lone whale (probably minke) rolling across the surface of the sea. My journey ended at Falmouth where it began. The ten days away had cost very little money; I had travelled alone but spent an intensive time sharing a small space with strangers who became friends. Much of the time I dressed in full oilskins and slept on a shelf (albeit a very comfortable one!). I had wandered freely in and out of France but at no time had anyone asked to see my passport. Sailing is often challenging, always varied and always interesting. It’s a good reminder that the best times in life are not necessarily the easiest or most comfortable! 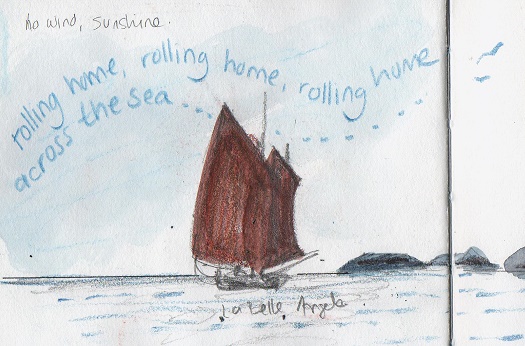 2 thoughts on “Sailing and sogginess”