We’re heading south again, down the Pacific coast. In the last few days we’ve called at Acapulco, then Guatemala, then Nicaragua. By the time the cruise is over we will have dipped our toes into every Latin American country from Colombia to Mexico; each visit is frustratingly short but fascinating and now at least I can place all these countries on the map. 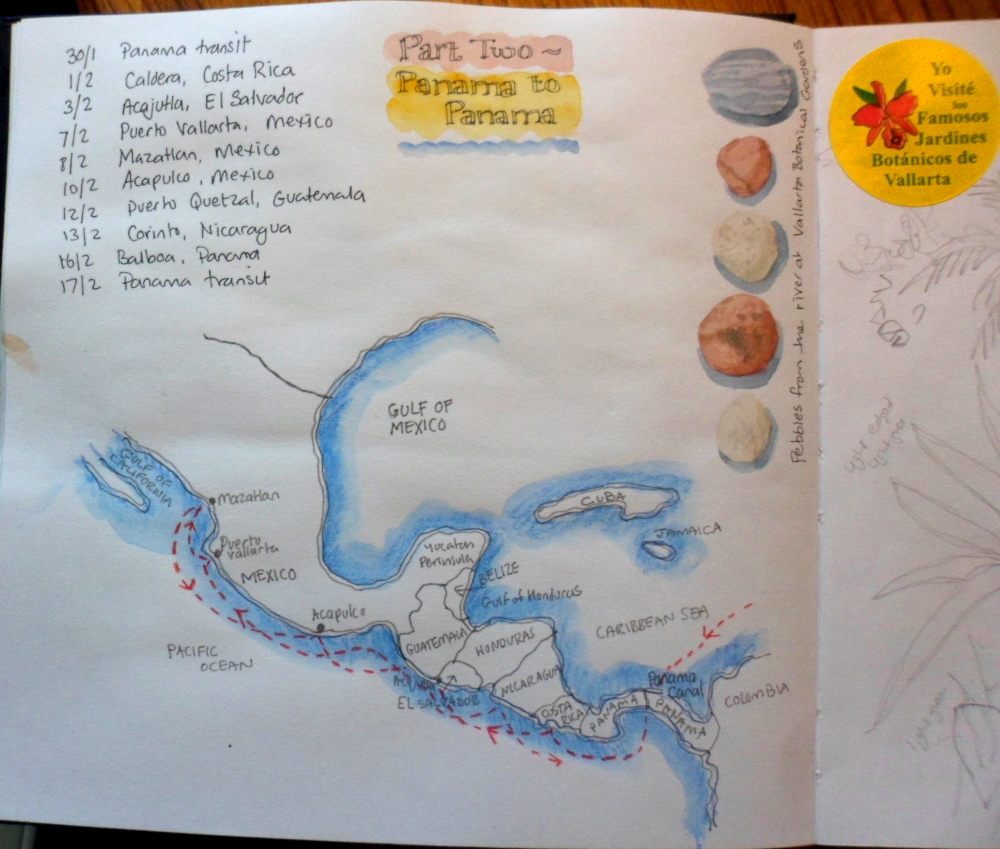 Sometimes Pat and I go on a coach trip, which gets us briefly into the interior and round a few touristy highlights. I find travelling in a group quite uncomfortable but it’s worth going along with when the ship is berthed in some remote container port and it’s the only way to get a flavour of the country in a few hours.

If we’re berthed close to town, we prefer to go it alone. A view from the top deck will usually give us an overview of where we can walk to, and Acapulco was a perfect choice; we could see the old town, we could see beaches and harbour, so off we went. The first challenge was escaping the taxi drivers and tour guides waiting at the terminal gate, desperate for our custom. ‘Twenty dollars, ma’am, two hour drive, show you everything!’ ‘No thanks, we’re going for a walk’. ‘But I show you the whole town and my car is air conditioned! OK, fifteen dollar…’ ‘No, we don’t want to sit in a car all day, thank you, even your beautiful air conditioned car. We want to wander to a bar somewhere near the sea and sketch and watch Mexico stroll by.’

The taxi drivers, baffled, gave up on us, and then it was the turn of the walking guides, all accredited by Acapulco tourism and keen to show their city off. ‘I show you the fort, the museum, and the cathedral, and the market…no pay, you just give me tip’, he began. ‘No thank you, very kind, but we just want to walk. We don’t mind if we don’t see it all, we only want to go where the mood takes us and stop when we feel like it. We’d quite like a day off from museums and history and churches, please, and believe it or not, we don’t want to go shopping.’

So we had our perfect day, turning away from the high rise smart end of town and heading for the scruffy end, following our instinct and ending up in a small fishing cove with no tourists and a beach bar made of corrugated iron and plastic sheeting for a roof. We sat at a table on the beach and drank beer from the can whilst sketching the scene, enjoying the freedom of ‘being’ rather than ‘doing’.

We then walked up the hill and found ourselves at the spot where the famous cliff divers perform their daily show for the tourists. It’s a run down part of town now, crumbling railings and cracked pavements, but there are echoes of a former grandeur when it was a fashionable resort. All the investment is clearly now going into the smart end of town on the other side of the bay. With time to spare and in need of a toilet, we wandered into the only hotel we could find and were offered a special lunchtime deal – a meal and a cocktail on a terrace overlooking the divers for sixteen dollars. Perfect, and a far better way to watch the divers perform their 35m feats of prowess than standing on the hot viewing platform (and yes, the loos were very nice too!) 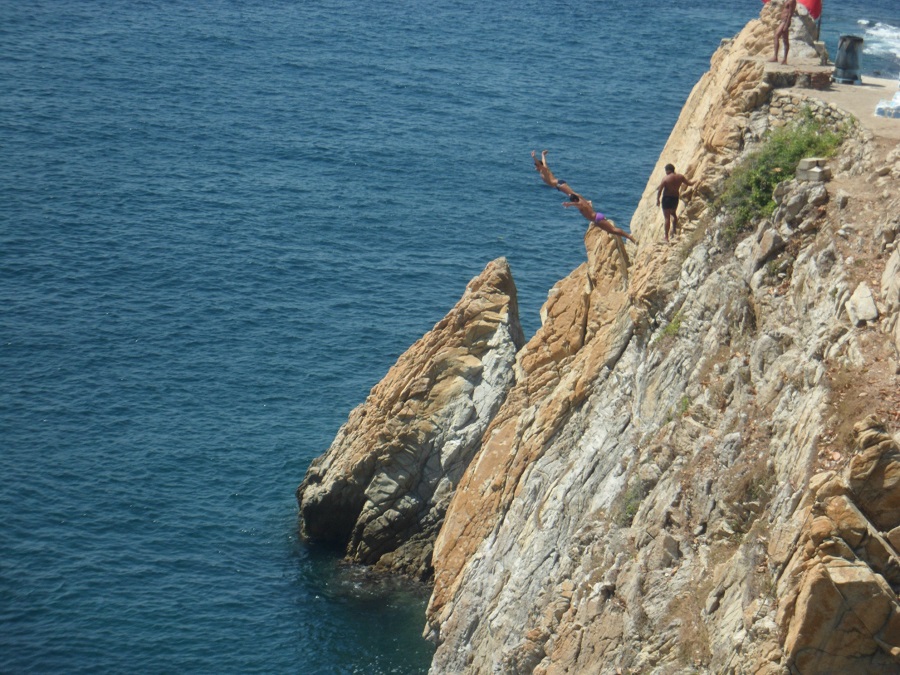 From there we followed our noses (which were obviously in good form) back through town and found the small beach close to the cruise terminal where we spent our last 100 pesas – about £2.50 – on two beers and the hire of a beach umbrella with chairs. We swam in the warm turquoise sea and chatted to the barman, Thomas, about Mexico, America, the challenges they face and the difficulties of earning a living. By 4pm we were back on board ship for 4.30 departure feeling tired but mellow and delighted with all things Mexican.

Two days after leaving Acapulco we were in Guatemala where we’d booked a trip to the old capital of La Antigua. A coach trip is like being shown a wonderful banquet but only being allowed a mouthful of a few of the dishes. There was so much I wanted to sketch as we drove past colourful fruit markets and smoking volcanoes, stopped for half an hour each at the jade museum and workshop, the colourful old town of Antigua, and the calm gardens and courtyards of the coffee and Mayan life museum. I snatched what sketches I could from the coach window or standing in the market square and for the rest have to rely on memory or checking photos.

My sketchbook diary is full of fragments, enough to bring memories to life and enough to prove to my art students that the only bad sketchbook is an empty one. I’m trying to help them to bridge the gap between copying from photos and drawing from life by showing that it isn’t really such a scary leap at all. My sketchbook is full of fragments done mostly on the spot but added to later from photographs, from memory and, in the case of birds and flying fish, with the help of Mr Google. Quite a few of my class have started sketching from life for the first time and found it not so terrifying after all, which gives me huge pleasure. Next stop – Balboa, Panama and the return transit through the Canal. How fortunate am I!

3 thoughts on “From Panama to Mexico… and back again”

« Ukuleles on the Spanish Main

Hanging out in Havana »