When Thor Heyerdahl took his balsa wood raft  Kon Tiki across the Pacific  in 1947, he did it to show that in theory the Polynesian islanders could have originated from mainland South America.   There’s nothing quite like a bit of practical archaeology; personally, I’d have paid more attention to history lessons at school if they had explained the part trade winds and ocean currents played in deciding the course of human history.

When early seafarers set off in search of new lands to conquer, trade, treasure, knowledge, personal glory, or to escape from a crappy life on shore, they faced hazards and took risks that we can only imagine.  No weather forecasts, no accurate charts, no gps, no real idea of how long their journey might be.  But there’s one thing they didn’t have to face – waste.  Even in Thor Heyerdahl’s time, the oceans were still mostly pristine, but the problem of plastic waste in the oceans is a big enough issue now.  How big exactly?  The Great Pacific Garbage Patch, a collection of non-soluble waste gathered together by the relentless motion of the ocean currents, is now almost as big as Europe,  a mess that can be seen from space as a shameful witness to human carelessness.  And there’s one gathering in the Atlantic too.

So what does this have to do with Kon Tiki?  Well, wherever there’s bad news there’s usually hope, and it manifests in many ways.  A handful of American campaigners are taking the lead (after all, the Great Pacific Garbage Patch is off their west coast, and the USA gets through 1500 plastic bottles every second) and one of the latest schemes is the Plastiki expedition – a 60 boat made not  from balsa wood but from 12000 plastic bottles.  Plastiki recently set off from San Francisco to Sydney, by way of the Garbage Patch, to raise awareness of the problem.  The website is www.plastiki.com – it’s a bit mad, with great graphics and a day to day account of the trip, but not much in the way of background information on the reason for the voyage, though there’s a fairly sensible statement on their facebook page.  I’m not sure I’d trust my life to plastic bottles any more than to balsa wood – though at least anything made of plastic will outlast us all.  Good luck to the crew of Plastiki and her mission.  I’m going to give it a mention in my current book, which is gradually taking over my life, brain and studio, and is the reason why I’ve become so focussed on all things marine and ecological lately.  I’m still only on the first chapter there are six more to go; drawing board and table are already piled high with books, sketches, abandoned first drafts and assorted bits of paper.  Family are getting used to me babbling about plankton and ocean trenches instead of having normal conversation over the dinner table.  I will emerge blinking in the sunlight at the beginning of July and talk about something else, that’s a promise!

I haven’t drawn a picture of Plastiki yet, so in the meantime, here’s a krill..  one of the smallest creatures in the ocean that makes a tasty snack for the largest creature on the planet  – the blue whale, who chomps through an impressive 4 tons of these every day. 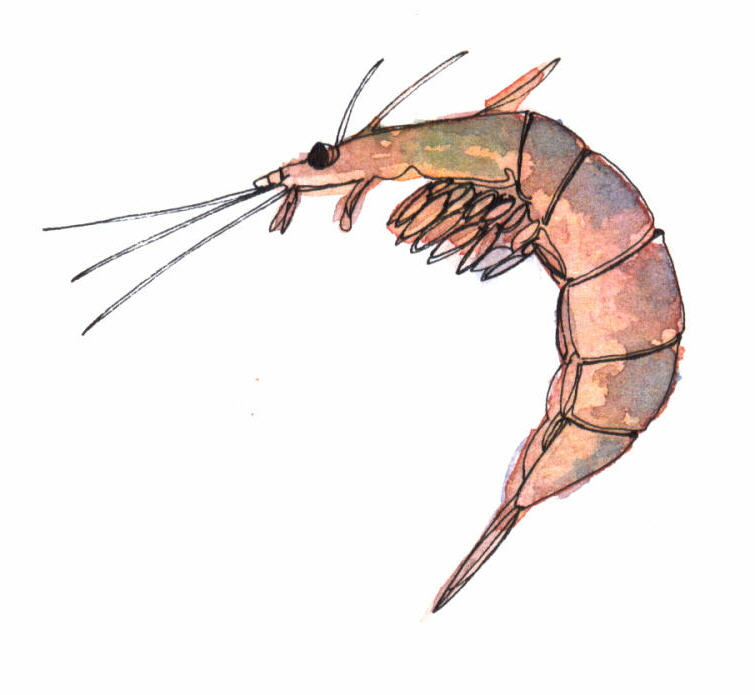