“A painting”, said a visitor to my studio as he pondered which picture to buy, “is a conversation”.  He chose the one, I guess, that spoke to him most eloquently, and I hope the dialogue is still continuing whenever he looks at it.  It’s true that the most effective paintings are those which leave something for the viewer to do, or leave something to the imagination; one brushstroke is worth a thousand – if it’s the right brushstroke.

I don’t mean that detailed paintings are always dull.  I used to paint ridiculously detailed miniatures after all, and I think they evoked a different kind of dialogue, drawing viewers into another world.  But however well a painting engages the viewer, it’s nothing compared to the Victorian view of art.  I went to a NADFAS lecture on Victorian Narrative Painting by Lizzie Darbyshire, a brilliant revelation on how to ‘read’ Victorian art, paintings which were designed in every detail to reflect and reinforce the values of the day.   Art was big business, and viewers expected to be able to read a painting like a book.

One example, ‘The London Visitors’, by Tissot, shows a well dressed couple standing on the steps of a London landmark.  So far, so dull.  But the critics of the day were shocked.  The lady, it seemed, was not as ladylike as her appearance suggested. Why?  Because her eyes are staring out of the picture at the viewer, rather than cast down demurely and attending to the guide book her husband is browsing.  Ladies, apparently, did not make eye contact with men.  Her reputation is further tarnished by a small detail in the corner of the painting which we didn’t notice until it was pointed out – a cigar, lit, partly smoked and then thrown down on the step.  This, according to the Victorian mind map, meant only one thing; the lady had been flirting with a stranger.  This is a huge mental leap for us, but perfectly logical for the customs of the times, which dictated that a gentleman does not make approaches to a lady with a cigar in his hand.  Search for ‘London Visitors’ on google images if you want to see for yourself.

Enough of the history lesson, but it’s interesting to see how our visual shorthand has changed over a century.  These days we are as familiar with the icons used on computer screens as the Victorians were with their visual moral messages.  My own paintings usually have to tell a story – book illustrations for one, and cartoons for another.  The style couldn’t be more different from the classical style of Tissot, but I think that our pleasure in a good cartoon is because we can read it like a comedy sketch.  Here’s one I did for Practical Boat Owner a while ago (I can’t show you the latest one because it’s not out yet!) 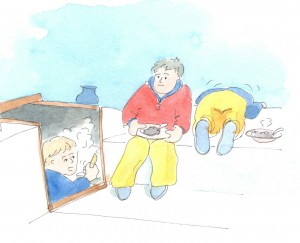 I can’t remember the caption for this one… and you’d need to read the Dave Selby article it was attached to, but hopefully you get the drift!  Here’s another, more recent, to go with a hilarious article about crossing an ocean with a parsimonious skipper.  I think the caption for this one was ‘Dave would have plenty of time to regret eating that third weetabix’. 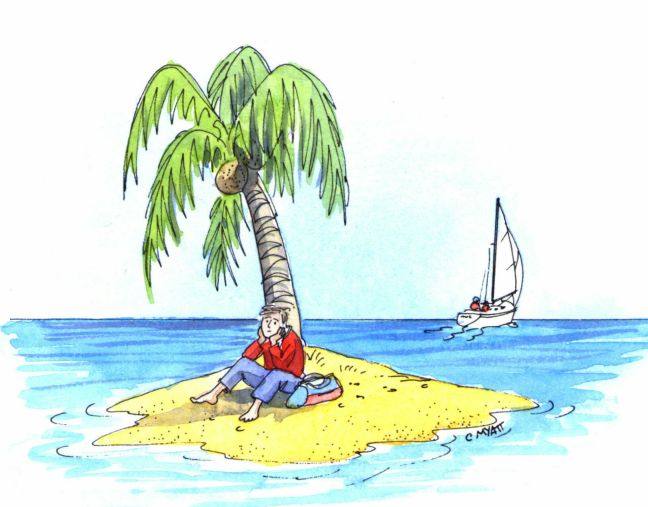 I’m so glad I’m not a Victorian artist.  Apart from the inconvenience of all those corsets and dresses, I don’t think I could do ‘demure and laydlike’, and I would so much prefer to make people laugh, or at least smile, than preach moral messages!

« Learning, singing and a Tenby lugger