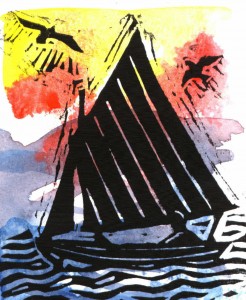 b)  Not having deadlines.

Last year I was suffering  from the first type.  So far this year the second version is looming.  I’ve plenty of work to get on with, including a revision of the Log Book for Children which is nearly out of print, and ideas for new designs, but all that involves spending money before I earn it!  I could do with another book deal, and then I can happily complain about deadline stress again.

In the meantime, it’s a good time of year for making lists, so I’m starting with a list of my top ten books – the ones I’ve really enjoyed, that is, not the ones I feel I ought to have enjoyed.  Some have been read recently, some are old favourites, but all are on my list of books that deserve reading more than once. There are dozens more, of course, but if I spent any longer sorting them out I’ll never get anything done.

An inspirational look at language, how it’s changed, how it’s used and the influences that shape it.   I took this out of the library, read it in one sitting then went and bought it.  Looking forward to a second dip.

‘Casting Off’ by Libby Purves

One of my favourite authors, with stories and characters that take over your life, a core of humour and delicious phrasing.  This one I like in particular because it’s about a middle aged woman getting into a strop and storming off in the family yacht.

‘The Tennis Party’ by Madeleine Wickham

No boats in this one, but characters that fill your living room and demand your full attention.  A tale of wealth, envy, aspiration and come-uppance.   Quality chick-lit!

‘King of the Castle’ by Martin Plimmer

An underachieving writer faces the challenges of chaotic family life, unappreciative editors and desperate assignments before finding his breakthrough. Endearing and hilarious.

All my favourite things in one book – humour, clever observational writing and sailing ships.  A memorable account of one of the last cargo voyages under sail, as Newby turns his back on the nine to five and runs away to sea.

‘The Magic of the Swatchways’ by Maurice Griffiths

A well thumbed favourite, much loved by all who have discovered that sailing the east coast is more boating around in the muck than mucking around in boats.  Written with the care and modesty typical of the time, this series of pre-war coastal cruising anecdotes is evocative of a more perilous and peaceful age.

‘The Great Automatic Grammatizator and Other Stories’ by Roald Dahl

Slightly bonkers and rather clever.  Short stories are a joy to dip into, especially the unusual ones that make you think  ‘ooh, I wish I’d thought of that!’

The art of making everyday situations fascinating.  I think it was Alex Keegan who said that a good short story is something you can read in a few minutes but remember for a lifetime.

‘Alone on a Wide, Wide Sea’ by Michael Morpurgo

Crossing an ocean in a small boat, marine conservation issues and a cracking good story.  I wish these books had been around when I was a proper child.

‘We Didn’t Mean to Go to Sea’ by Arthur Ransome

Alright, I’ll admit, I’m biased towards sea stories.  Though I could just as easily have put the Chronicles of Narnia in as most influential children’s classic.That’s it for  now.  If I leave it any longer I’ll come up with ten different ones, but these are pure enjoyment – some with a dash of salt!

1 thought on “Deadlines and delight”

On the drawing board – growing a compass rose »