On the drawing board – growing a compass rose

Starting a project in the morning and finishing it in the afternoon doesn’t happen often; life is usually much messier than that, especially when working on a book.  But it’s a new year with a new list of projects, one of which is a mouse mat design.  I did a similar design last year with that in mind but shelved it and then used that image elsewhere.  So starting again seemed like an enjoyable way to spend a rainy windy day.  Here it is, stage by stage: 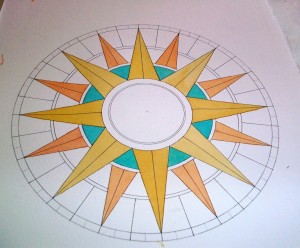 Stage One.  Well, almost.  By the time I remembered to get the camera out I’d drawn the design in pencil, then in pen, and started  laying on colour. 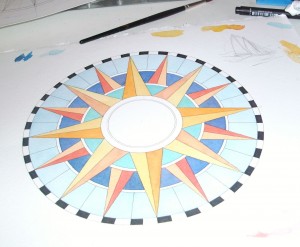 Stage Two.  I don’t have a colour scheme in mind, but work it out one piece at a time.  The way to grow a painting is to pause between each stage and let the painting ‘tell’ you what it needs next, rather than rushing in and risk messing up. 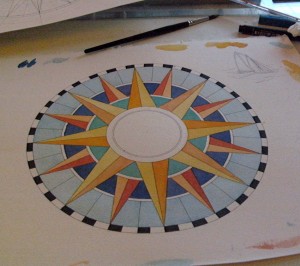 Stage Three.  This is the easy bit – more colouring in!  I’ve more or less decided what colour scheme it needs.  The compass points start to come to life once I lay a darker colour on one side of each point. 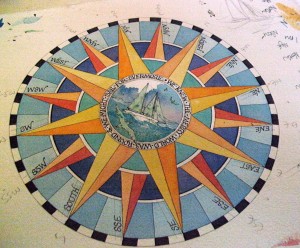 Stage Four.  Ah, now it’s getting messy.  This is the stage I usually spoil it, by rushing in without thinking.   The sails and bird in the centre section are still covered in masking fluid.  It always takes time getting the spacing right on the border quote.  Lots of pencil lines to rub out! 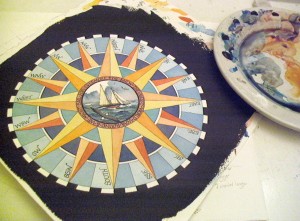 Stage Five.  Finished – more or less!  I’ll leave it to dry and take a fresh view in the morning.  The next stage is to get quotes for round mousemats, agonise about how many to get done (write a large cheque for a big print run and get the unit price down… or not), then get the image scanned and hope to sell lots online and at the dinghy show.

The plus side of having no deadlines at the moment is the time to develop new ideas.  The minus side?  Turning images into saleable items involves spending rather than earning!  At least to start with.  Have I earned that glass of wine yet, I wonder…..

5 thoughts on “On the drawing board – growing a compass rose”

It all depends on your point of view… »