It all depends on your point of view…

I learn more from teaching than my students do; there’s nothing to focus the mind quite like having to explain something clearly, to show how to do it and analyse why it’s going wrong for someone else. Drawing, I tell them, is just thinking with a pencil. Don’t blame your hand for your mistakes, blame  your brain.

I enjoy teaching Jane who comes to my studio for a lesson on a Friday morning.  Jane, having spent most of her life not drawing, now has 70 years’ worth of artistic urges to catch up on and she is has a very enquiring mind. This is good for me, as I need to find answers to her questions, so it keeps me on my toes.

Last week we wrestled with perspective. Not in a mathematical way, but by waving coffee mugs around (it’s ok, we’d drunk the contents). Jane wanted to know how to get the perspective right on a cylindrical object, where the round part shows as an ellipse. Well, it all depends on your point of view – literally. If the top of the mug is exactly on your eye level, it will appear as a straight line.  Honestly, it will.  Try it. If you move the mug to just below eye level, you get a small ellipse. The lower you go, the bigger the ellipse until you’re looking down on the mug and roundness is restored. 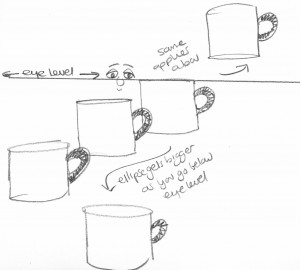 All very logical, but the problem begins when you try to draw the ellipse. ‘No, no!’ your brain says. ‘The top of a mug is a round thing!  It’s as round as a round thing that’s round!’.  Your knowledge of the shape of a mug interferes with what your eyes are telling you and the result is an uneasy compromise that neither brain nor eyes are happy with.  ‘It’s all wrong’, said Jane, of her attempted drawing, ‘but I don’t know why!’   What usually goes wrong is making the ellipse too big, because your brain won’t believe that something so round could possibly appear so narrow. Drop the mug just slightly below eye level and look, really look at the ellipse. How do you know if you’ve got it right? Trust your eyes and measure. See how many times the widest part of the ellipse goes into the body of the cylinder

That’s enough theory – if you’re not interested in drawing you are probably losing the will to live by now. But the main lesson of the lesson was that if you move an object in relation to your viewpoint, it becomes a different object.  What the object usually looks like is irrelevant; ask yourself – what does it look like now?  The next time you are baffled by perspective, wave a coffee mug around, or a wine glass.  Drink the wine first, of course, that’ll help.  It will also start you wondering how this lesson on viewpoint applies to life, when people cannot understand another person’s point of view unless they have the imagination (ie. mental imagery) to picture how a situation looks from another perspective.

Most of the time you don’t have to tie yourself in knots worrying about perspective.  Just draw.   Draw first, measure later and after a while, with subjects you’re familiar with, you won’t have to measure at all.  Sometimes you can decide to ignore perspective completely in the interests of design (that’s my excuse – what’s yours?) .  This week I’ve been working on a set of notebook designs as part of our list of new designs to make this year for shops and shows.  Here’s one – but do me a favour and don’t check the perspective!

« On the drawing board – growing a compass rose