A bad day for Columbus

Christopher Columbus, as everyone knows, was pretty impressive.  He had tenacity, the gift of the gab, the ability to lead, and an unshakeable belief that Asia lay on the other side of the Atlantic.  It wasn’t his fault that there was a large continent and an even larger ocean in the way; Columbus was quite happy running around Cuba, asking the natives if this was China and then interpreting their answers as ‘yes.’

What is not so well known is the story of how Columbus’ famous flagship piled up onto a reef.

Whilst spending time exploring Cuba and Hispaniola (now Haiti) and trying to find signs of wealthy civilisation, Columbus had to do a lot of socialising. All the locals wanted to have a look over the strange ship and Columbus, in the name of PR and possible future wealth, was happy to oblige, especially if they came bearing gifts of gold. When the Santa Maria finally set sail from Hispaniola everyone was exhausted from days and nights of hectic entertaining. The wind was light and at nightfall Columbus went below for a well deserved nap, leaving Juan de la Cosa as officer of the watch.  Juan was the owner of the Santa Maria, but he was as exhausted as his Admiral and, lulled by the calm conditions, he nodded off in a corner of the deck. This left a small boy in sole charge, steering the course he’d been ordered to steer. He could see nothing from his position behind the wheel and had no way of knowing that the current was setting the ship onto a reef. It was a calm night so there would have been no warning before Columbus was awoken by the sound of coral ripping timber.  Attempts to lighten ship and pull her free of the reef failed, and the crew finally took to the boats and were rescued by the Nina.

As far as I know, the wreck was never found.  History prefers to dwell on Columbus’ successes rather than his failures, particularly the all too human error that lost him his ship.  You certainly can’t blame the ship’s boy who at a guess would have been about 10-12 years old, and I rather fancy the idea of rewriting the story from his point of view.  I’ll put that one on the list for my sea stories project. 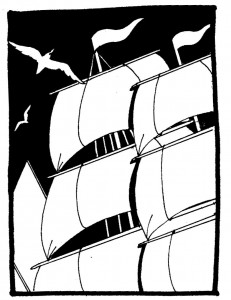 Meanwhile, I have been drawing as well as reading, honest.  There have been a lot of black and white drawings coming off my drawing board recently, quite a few of them commissioned by Sam Llewellyn for his excellent new journal Marine Quarterly.  The first issue was out on 1st March  – have a look at www.themarinequarterly.com.  Described as ‘a rich and varied feast’, it just goes to show that reading about the sea is as enjoyable as sailing on it.  As well as being considerably drier! 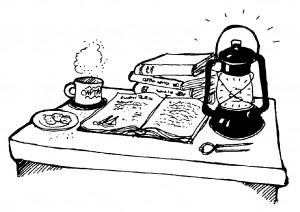 « Small boat on a big river