I was curled up in a sleeping bag with the light from paraffin lamps casting a warm glow on the varnished woodwork of the cabin.  The shelves were stuffed with sailing gear and books; on the cabin table a bottle of wine, the ship’s log book and a scribbled note from the skipper: “Help yourself to everything. Second draft of Ravelled Flag on the shelf for you to read. See you tomorrow.” 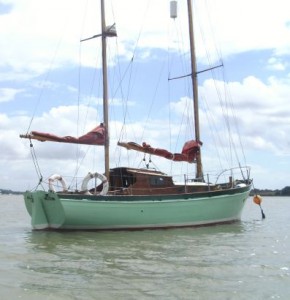 Arthur Ransome owned many boats in his time, and Peter Duck was probably his least favourite.  She was commissioned in his later years as a sort of ‘marine bath chair’.  A sturdy ketch with a modest sail plan, she makes up in sea keeping qualities what she lacks in performance.  Her current custodian, Julia Jones, spent her childhood years sailing Peter Duck with her parents, who bought her from Ransome. Julia slept in the bunk where Ransome used to stow his typewriter, so it is unsurprising that books have always been a part of her life.  After a career in publishing, Julia was the right person in the right place for the spirit of Swallows and Amazons to find a 21st century voice.  The result is a novel for children (and adults) called The Salt Stained Book, part one of a trilogy.  It’s an edgy, 21st century tale with sailing adventure at its core and I thoroughly enjoyed being commissioned to provide the cover painting and a sprinkling of sketchy illustrations for the end of each chapter. 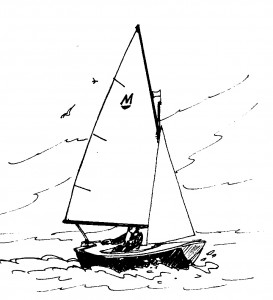 There’s more about the book and the excellent reviews it’s received on Julia’s own site http://golden-duck.co.uk/news/category/julia-reviews-and-articles.

Meanwhile, back on the river Orwell, I was looking forward to my first read of the Ravelled Flag, part two of the trilogy.  Although the book is still in draft stage, Julia needs to start thinking of cover design and images for each chapter.  (Not usually the author’s decision, I know, but Julia was advised to publish through her own publishing company, Golden Duck).  Reading through the absorbing tale while the evening breeze rocked Arthur Ransome’s boat, it felt humbling and satisfying to be in the same place but a different time as the source of some of the most influential children’s stories ever written; a feeling that perhaps our ability to reach into the future is dependent upon having deep and strong roots in the past.

Lying alone on a river in a warmly varnished cabin inspires introspection. The red wine probably helped.  The next morning skipper Julia arrived, along with others for the annual gathering of the Nancy Blackett Trust.  If you’re a Ransome fan and would love to sail on the boat that inspired ‘We Didn’t Mean To Go To Sea’, then hop straight over to http://nancyblackett.org/ without further ado – but don’t forget to hop back again as I haven’t finished yet.  A good time was had by all, while Nancy sailed on the river in company with the newly refurbished Swallow, the dinghy that featured in the film version of ‘Swallows and Amazons’. 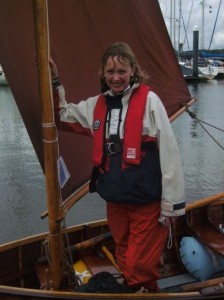 Swallow wasn’t the only film veteran there – Sophie Neville, who starred in the original ‘Swallows and Amazons’ film was getting reacquainted with the boat she first sailed on camera at the age of 12!  More about Sophie’s exploits on http://sophieneville.net/.

That night, after a convivial evening that may have involved a glass or two of wine over supper, there were four of us sleeping in Peter Duck’s small cabin.  Modern boats focus on comfort and caravan style cabin space, so they usually have a loo neatly built into a cupboard somewhere between foc’sle and saloon.  Peter Duck was built in an earlier time, when boatbuilders were rather more focussed on how a vessel would cope with heavy weather than whether her crew would be able to relieve themselves standing up.  There is indeed a loo on PD, but it’s wedged down by the foc’sle bunk.  With each bunk occupied, there was no question of using it in the night; we were given the combination code for the on-shore facilities before turning in.

You know that time around 4.30am when you wake up regretting the amount of fluid you’ve consumed the night before?  You roll over to try and get back to sleep, but your bladder won’t let you.  At home this is not a problem, but the prospect of a chilly dawn walk up a pontoon in your pyjamas is not inviting.  After repeated attempts to ignore the signals I gave in to the inevitable, trying to find shoes and a fleecy top without waking the others. It was light, but there was no-one around which is just as well as I defy anyone to look their best at 5am wearing only pink panther pyjamas, deck shoes and a fleecy top. Luckily I knew the numbers for the keypad on the ladies. Or did I?  Several attempts later, the door still bleeped at me and refused to open. I crossed my legs and had a think. Was it 1351? Or 1531 perhaps? I struggle with numbers and find remembering my PIN rather stressful. Abandoning the door, I headed for the woods.  Rabbits gazed incuriously at me as I crouched in the long grass – I just hoped there were no insomniac dog walkers around.  Mission accomplished, I tiptoed back into the cabin and into my sleeping bag, wide awake.

The pre-dawn calm gave way to a blustery morning and unhelpful shipping forecast – west or northwest 5-7.  Not ideal for Peter Duck‘s return passage to Woodbridge, but we thought we’d give it a go.  The wind started to show its temper as we came to the entrance of Harwich harbour, and even with her small sail area, the boat was overpressed.  We took a reef in the main before hitting the lumpy swell outside the harbour and were glad of it as we rolled up the Suffolk coast then headed inshore again for the entrance to the Deben.  Peter Duck was sailing at her best, well balanced and easy on the tiller even in the gusts. 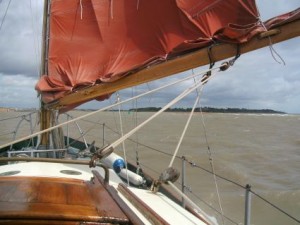 I think that’s the first time I’ve really enjoyed a strong wind passage whilst I was in it, rather than in a kind of  ‘that was scary and seasick but I feel great now it’s over’ kind of way.  There’s a lot to be said for a marine bath chair in a blow. 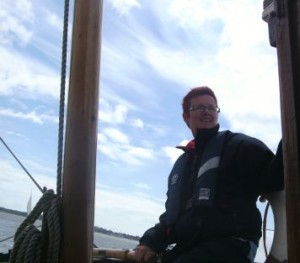 Old boats and new books – and a pirate or two »