Old boats and new books – and a pirate or two

Who stole August?  I’ve done so well posting at least a blog a month, and somehow this year it was July one minute and September the next.  Various domestic dramas and setbacks have intervened this summer, it’s true, but with each year that passes why do the days go faster with more stuff in them?

‘Nuff whingeing – the unwritten rule of blogs is that they be the shiny tip of the iceberg of life.  There was more to August than gloom and ironing (no, I’m not houseproud, but most of our lovely holiday guests were only with us for a day or two).  August bank holiday found me joyfully abandoning an Everest of ironing and heading north to Holyhead Festival of Traditional Sail, a delightful and sociable event full of unusual boats, interesting people, pirates and hussars, knot tyers and kippers.   There may also have been a glass or two of wine.  I was there for several reasons – firstly as a roving reporter for Classic Boat magazine (so you’ll be able to read a full report in December’s issue, all being well).  Secondly, I was selling my books and bits in Trinity Court alongside the other marine craftsmen and last but not least, I was there to catch up with old friends, make new ones and be around my favourite things, boats. 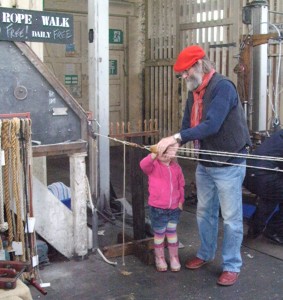 If you want to know anything at all about ropes and knots, Des Pawson MBE is your man.  He spent a busy weekend introducing children to the simple but ingenious ropewalk, so they all had a piece of rope to take home that they’d made themselves.  Des and Liz’s website is http://www.despawson.com/ if you’re interested in all things knotty.

It’s good to see youngsters included in the festival in so many ways.  Pupils from the local primary school who entered a poster competition were invited on board brigantine Zebu and were slightly bemused to receive their prizes from a well known pirate….. 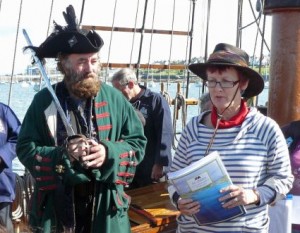 You can see Blackbeard was fascinated by me blathering on about marine conservation as I presented a copy of Go Green to the school headmistress for their library. 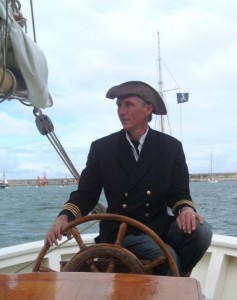 Finally, here’s the lovely Scott Metcalfe, shipwright and artist, on his even lovelier schooner Vilma.  Scott is delighted that I’m featuring Vilma in one of my children’s adventure stories, and already has visions of his boat being chartered for the feature film.  Move over, Pirates of the Caribbean…… such faith, Scott. Given that the book is still a mad jumble of scribbled notes and false starts in a large folder called Treasure Island, he might have to wait some time.

Moving rapidly on…….. from old boats to new.  September is all about Southampton Boat Show, which is why we’re now drowning in boxes of stuff and lists of things to do, as well as laundry.  One thing on my list was ‘update blog’ – oh good, nearly done, but not quite.  Next on the list is ‘plan Children’s Log Book Launch’….. 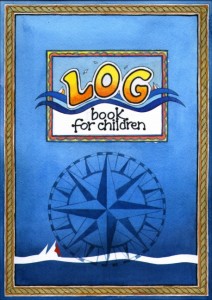 The original Log Book for Children finally sold out earlier this year, so we decided to give it a thorough refit as well as a reprint. In consultation with the Cruising Department of the RYA, we’ve tweaked a few things and added more pages.  Better still, we now know a lot more about publishing than we did in 2004, so we’ve been able to get the price down a bit by doing the binding ourselves.  It means that Perry is spending this week in the workshop listening to Radio 2 and drinking rather a lot of coffee with a binding machine that squeaks every time you pull the handle, but the pile of books is growing.

If you’re at Southampton Boat Show on the first Saturday, 17th September at 3pm, come along to Starfish Books stand J040 in Mayflower Hall (opposite Kelvin Hughes) where we’ll be popping a cork or two to launch the new edition.  Any excuse!

Here’s another thing on my list – I’m booked to do a 20 minute slot on the stage at the boat show as part of the Authors Live event. This is on Tuesday 20th at 3.15, so come along and be rent-a-mob if you need a sit down inbetween buying deck shoes and widgets.  I’ve promised to be entertaining and talk about my books, and my family have promised to unplug the mike if I try and sing any sea shanties.  Not sure what I’m going to say yet, but will make sure there are plenty of cartoon images on the screen in case of boredom.  Nothing like a informed lecture from a sailing expert, is there?  Nothing like, indeed!  If you want to see the full programme of events, have a look at http://goo.gl/wlwqU . 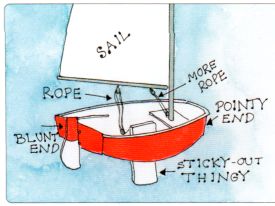