It’s boat show time again; we’re here in Southampton for ten days of mixing business with pleasure, trying to sell stuff, meeting up with old friends and finding out what’s going on in the sailing world.  So this post  is a few snapshots that for me sum up what the show is about – not the media perception of ‘yachting’ with its monolithic white superyachts, but interesting people, unusual boats and worthwhile projects.

The first sight to greet you as you walk through the doors is, reassuringly, a small wooden gaff cutter, on show from a traditional boatyard in the Orkneys. 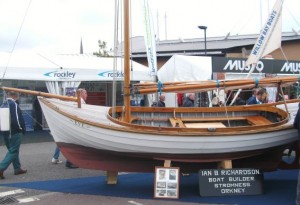 It’s in good company; a delightful selection of small boats and their builders remind us that the smaller the boat, the bigger the fun (and the less the expense!). 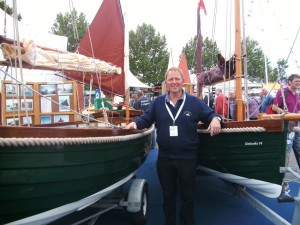 Here’s Roger Wilkinson who builds the beautiful Kittiwake Boats (http://www.kittiwakeboats.co.uk/).  There’s  not much Roger doesn’t know about having maximum fun on the water in small boats.  Ask his dog. 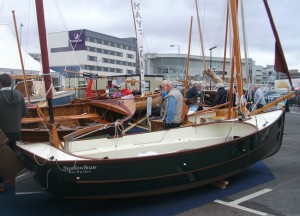 Then there’s Swallow Boats from West Wales, run by Nick and Matt Newland, who know how to combine traditional looks with modern technology for a very distinctive look.

Now let’s move indoors to the wonderful nautical bookseller Kelvin Hughes who sell every salty book you could possibly think of (including all of mine), and many you never thought existed.  Their staff are lovely, knowledgeable people who know exactly how much gin and tonic an author needs during a book signing session.  Here’s Sam Llewellyn, thriller writer, yachting columnist and editor of the illustrious marine quarterly… (www.samllewellyn.com) 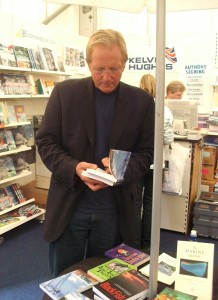 Rachel and Paul Chandler hit the headlines when they were kidnapped by Somali pirates and held for over a year.  Now grateful to be home again with their boat returned, they were signing copies of their book ‘Hostage’, and fascinating to chat to. 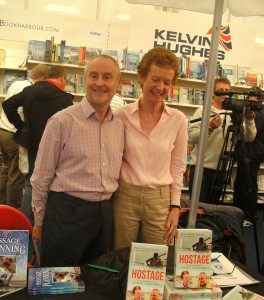 On the trail of interesting people, quadriplegic yachtsman and all round get-things-done chap Geoff Holt has come up with a practical and fast powerboat for wheelchair users…. 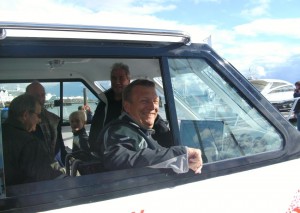 The boat is called ‘Wetwheels’ and you can find out more on Geoff’s website http://geoffholt.com/2011/05/project-wetwheels/

And finally…. because it’s been a long day today with another long day tomorrow….  the lovely Brixham trawler ‘Leader’ was at the show at the weekend. 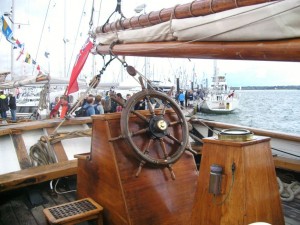 The last time I was on board ‘Leader’ was in the Western Isles, umpteen years ago, starry eyed and more than a little drunk on whiskey.  These days ‘Leader’ is doing a fantastic job taking disadvantaged children sailing, and needs all the support she can get.  You don’t have to be a hoodie to have a go – she hosts charter parties for grown ups to.  Find out more on http://www.trinitysailingtrust.org/.

« Old boats and new books – and a pirate or two

Wellies in the wilderness… »