If in doubt, make tea…

Oh, well done Ben Ainslie.  Small boat racing is something I admire but would never, ever, want to do. For a start, it’s fast, wet and stressful and I like my boats slow, dry and relaxing.  Then, there’s the ‘winning’ thing – I’ve tried racing once or twice at club level but really can’t find it in me to mind if someone else sails faster than I do.  If they get to the bar first they can buy the drinks!

I met Ben Ainslie very briefly one boat show as he contributed the foreword to my book on marine conservation (‘RYA Go Green – A young person’s guide to the Blue Planet’ – you have got a copy, haven’t you?). Although his level of sailing and mine are worlds apart, the sea inspires respect and fascination from everyone who ventures out onto it. 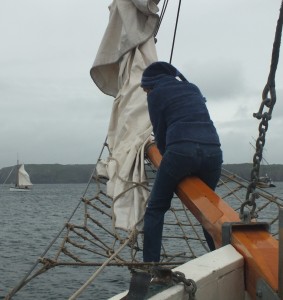 No medals for shuffling up a bowsprit to lash the jib….

Sailing is different things to different people; for the racers and Olympians it’s a sport, all about excellence, tactics and adrenalin. For others, it’s a lifestyle choice, an opportunity to see the world in a different way.  I don’t do ‘excellence’, I do satisfaction. Satisfaction at staying safe, being seamanlike, coping with challenges, making the right decisions, solving problems and feeling the connection, through the tiller, of a happy boat with sails well set. 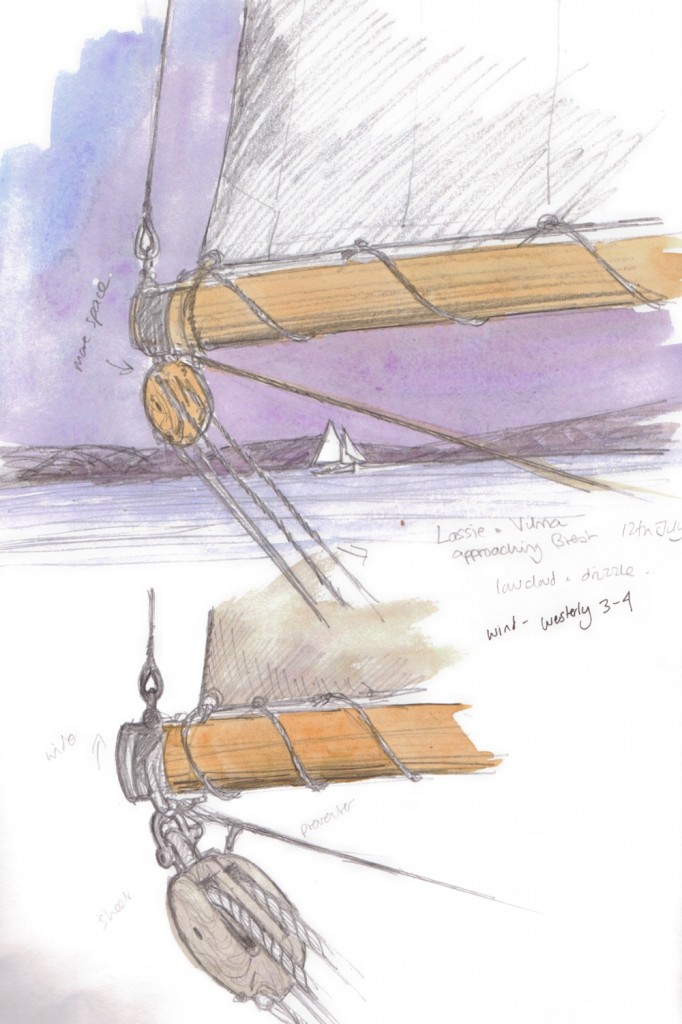 Floating artist at work.  If you don’t get it right first time, have another go!

I chose to sail to the Festivals of Sail at Brest and Douarnenez on other people’s boats, and looked for someone who had space for a roving artist. Having never sailed a schooner, I thought that might be a good place to start, and the lovely Scott Metcalf (an excellent shipwright, Waterfront Marine in Bangor, North Wales) kindly offered me a berth on Vilma, his tops’l schooner. I met the boat in Mousehole, Cornwall, and the weather was kind to us for the passage south.  We rolled at an easy pace through the day and night, getting into the rhythm of the Atlantic swell as it pushes up into the English Channel.  In light winds the motion is gentle, as if you can feel the planet breathing. 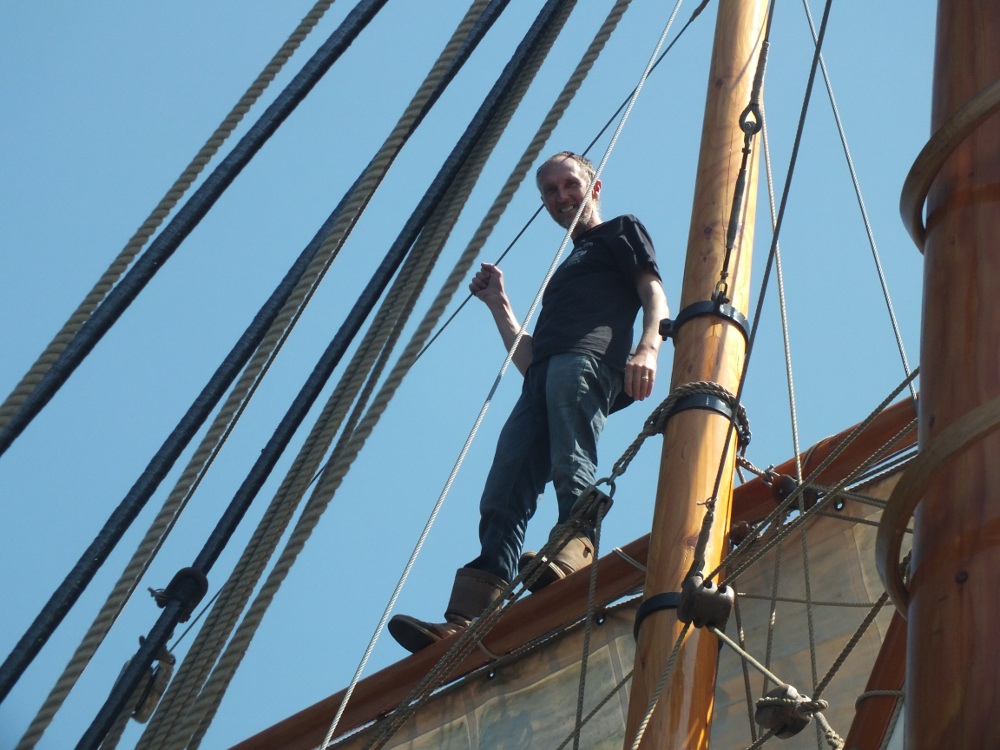 Scott takes a stroll along the yardarm. Sensibly, he didn’t ask me to get up there.

Being a nautical hitch-hiker is an interesting role. I wanted to be as useful as possible as quickly as possible on an unfamiliar boat with lots of rope. Vilma is just under 50′ on deck, but she’s very much a little ship. I don’t have muscles so there’s a lot of heavy work that I’m no good for. But there’s much I can do – and it helps to make notes. When the skipper asks you to brace the yards to port, you need to know which rope to go for!

A seagull’s eye view of Vilma’s pinrails….. I was getting the hang of it, honest!

So I’m working on some top tips to anyone else thinking of running away to sea, with the aim of making the skipper happy to have had you on board, rather than desperate to drop you ashore at the first opportunity. Did I get it right this time?  I don’t know, you’d have to ask Scott – or John, the Cornish lugger skipper who kindly took me aboard for the passage home.

1.  Find out how the skipper likes his tea or coffee.  Offer to make it at every opportunity.

3.  Find out how the loo works before you need to use it.

4.  Lie on deck and look up.  Don’t fall asleep until you’ve had a good look at where all the running rigging goes to.

5.  Make a sketch diagram of the pinrails and cleats so you stand a chance of grabbing the right rope!

7.  Find your way around the galley so you can get cooking whenever needed.

8.  Don’t wait to be asked to take the rubbish ashore.

9.  Keep your gear contained and not sprawled all over the cabin.

11.  Emerging on deck after a night passage with a plate of bacon and egg butties for all crew compensates for ineptitude and lack of muscle power in other areas!

12.  Try and leave the drinks locker fuller than you found it. 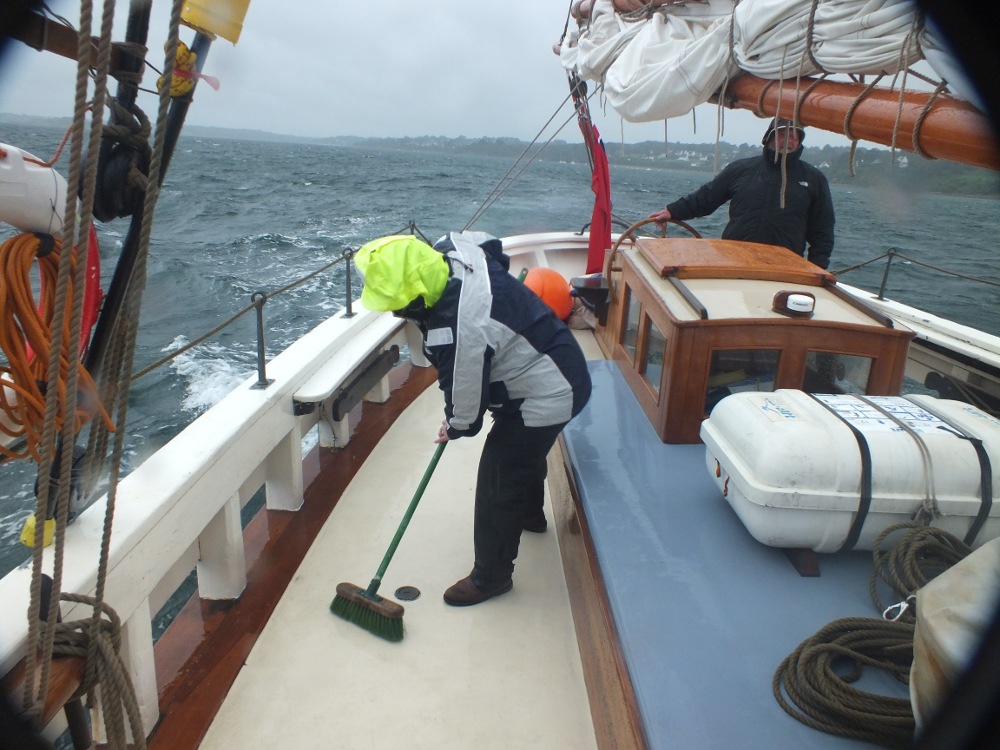 See, it wasn’t all sunshine and vin rouge. Sue swabbing the decks in the Rade de Brest.

Now here’s another thing – I was away for a month and for most of that time I had no access to phones, internet, email, radio or TV. Not deliberate cold turkey, but my android phone decided it didn’t do roaming so I switched it off. During that time, the world turned without me and nobody panicked because I didn’t respond to emails or messages. I had time to think, time to notice all the amazing sights around me.  Time to occupy the present, with full attention on the people I was with and what we were all doing.  Time to remember what my sketch book is for.  That break from all media was as refreshing as the blue waters of Brittany and the clear air of the Western Approaches. 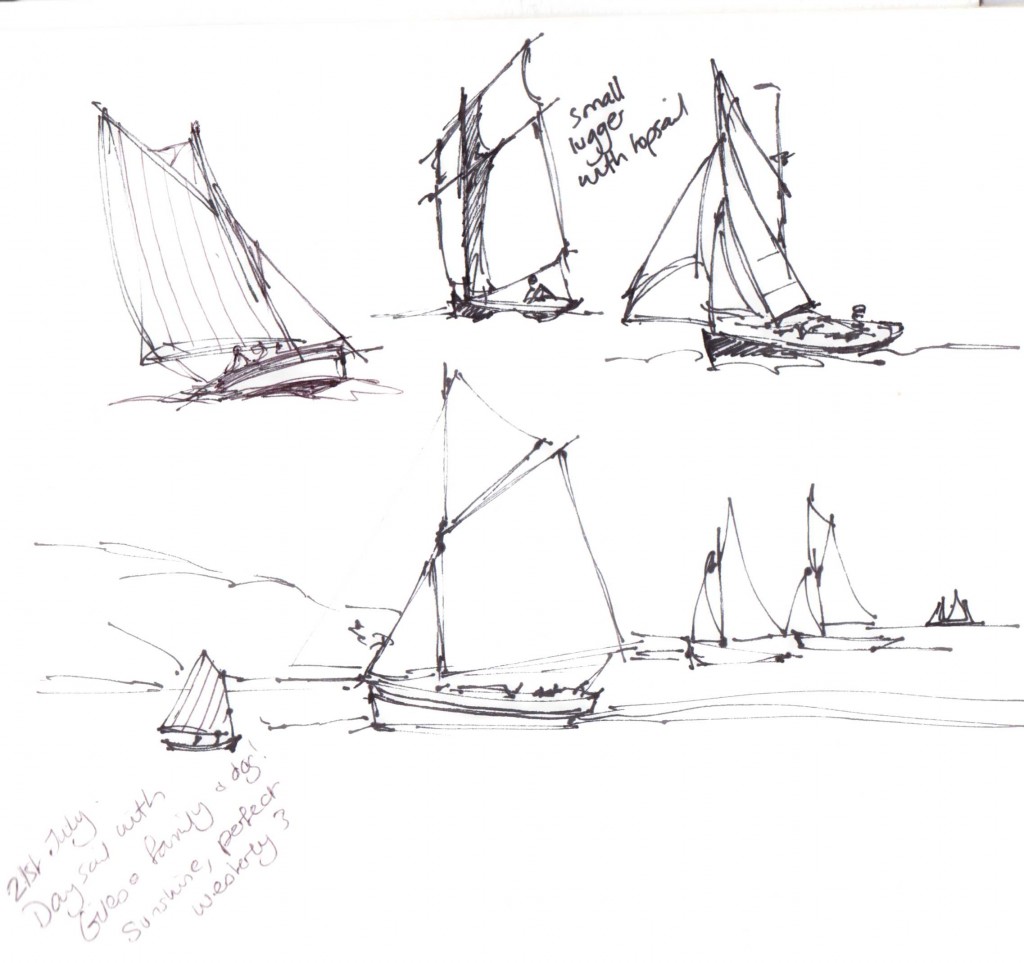