I’m writing this on board ‘Ellen’ anchored on the River Deben in Suffolk, just off a pretty wooded beach called the Rocks. Terns are swooping close by, their calls shrill but kinder on the ear than the boat’s anchor alarm, which goes off regularly enough to stop me getting complacent about the holding quality of the river bed. The Deben is a lovely river, small and perfectly formed but with a ship-eating shingle bar at the entrance that shifts its position every year. The entrance is not too bad this year – a straight line between two buoys. Keep them lined up as you surge in on the tide, don’t look at the seething, hissing breakers on each side, and then thank the trolls of the Deben bar each time you manage a safe entrance or exit. 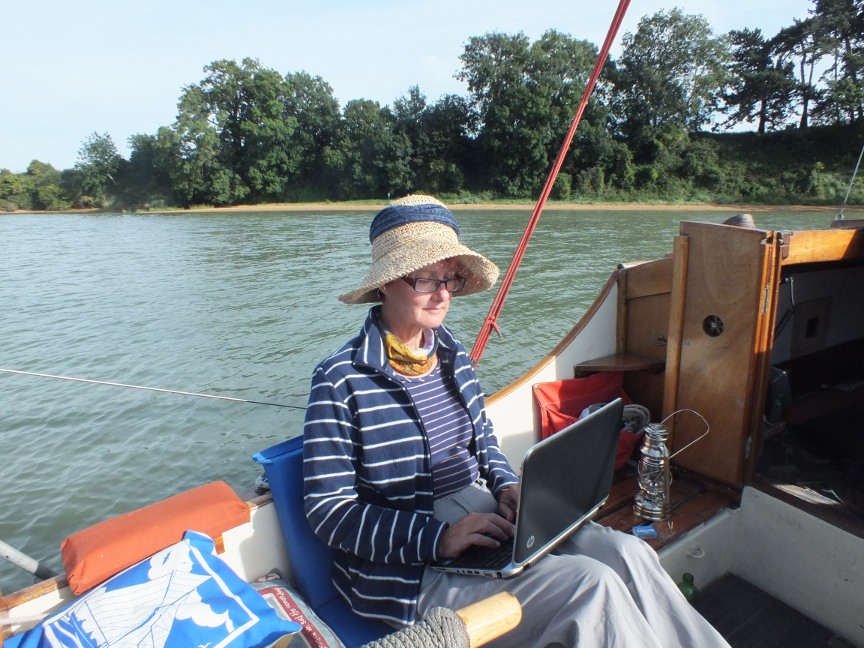 So… my summer afloat has taken me to new places, both an inner and outer journey. Part of the intention was to rekindle lost confidence; I may not have crossed any oceans, but any sailing adventure fills me with excitement and anxiety in equal measure.  I took the view that if I was going to suffer from anxiety attacks anyway, even when doing nothing at all, I might as well give myself something to be anxious about and have something to show for it – new experiences, challenges, places and people.

The weather may not have been as helpful to a timid adventurer as it might have been, but it’s been a good summer for festivals of sail. Back from the big, mad French festivals of Brest and Douarnenez in July, still with images of pirouetting tugboats, stately tall ships and midnight parades of sail in mind, it was time for the smaller, gentler gatherings of sail in UK waters. Ipswich Maritime Festival was hot, sociable and involved much messing about in small boats, including the oh-so-traditional nautical skills of rubber dinghy football and sitting on boats drinking beer. 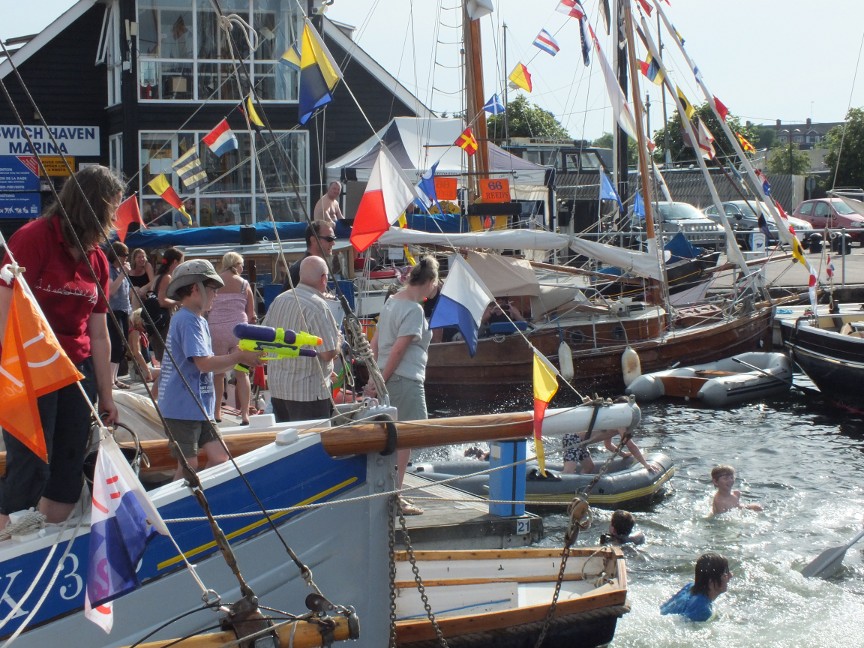 There was more maritime mayhem at Holyhead last weekend. It was too far to sail so I drove there and caught up with schooner ‘Vilma’ and other assorted boats and crew who had gathered for the annual Festival of Sail. This one features the Anglesey Hussars, who re-enact the Battle of Holyhead Bay with enthusiasm, muskets, cannons and loud bangs. The fact that there wasn’t a historical battle of Holyhead Bay is no deterrent as they happily fired on the shore battery, a fleet of oppies, the marina and everyone on the pontoon. All in the spirit of pageantry of course. The lifeboat joined in with hoses and the children in oppies retaliated with water pistols. In the evening everyone gathered for Poems and Pints and had to endure a spirited and unrehearsed rendition of my latest song “Hey Big Fender!” Think yourself lucky you weren’t there (unless of course you were, in which case thank you for your tolerance!) 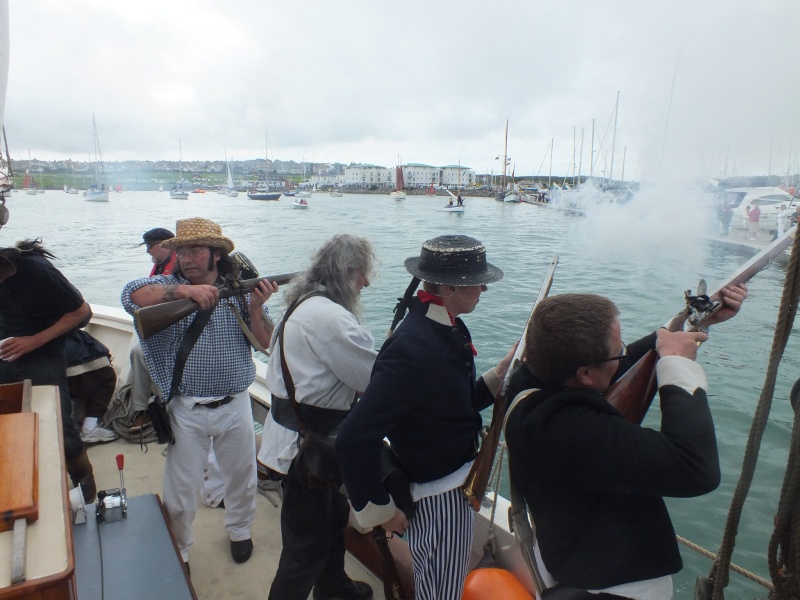 One of the best things about traditional boats, apart from the fact that they are lovely to draw, is that they are nearly always owned by interesting people. This is Happy Quest, an immaculately kept wooden gaff cutter, designed, built and sailed engineless by David Grainger from Pembrokeshire, pictured here with his two crew – also called David and David. A fourth David joined them for the passage to Holyhead. I didn’t like to ask their combined ages, but there is a wealth of calm, understated and skilled seamanship in those three wise heads. My son James was invited to crew for them on the race (which of course they won).  Would it be a problem him not being called David? I asked. The skipper thought for a moment and said, I think he can be an honorary David. What happens when the skipper asks David to sheet in or hoist a sail remains a mystery! 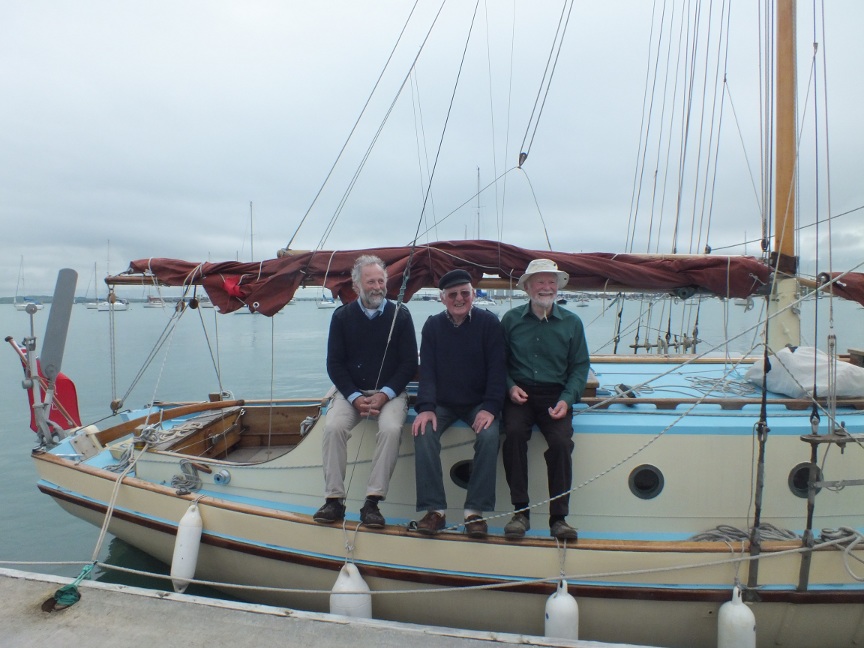 Back from Holyhead I returned to the studio braced to face my list of Things to Do, but then got sidetracked by the Shipping Forecast which, for a change, offered an array of gifts – a high pressure system, sunshine and a day of rare northerly winds. This tied in nicely with an invitation to join Julia Jones’ Peter Duck on a trip to Pin Mill along with Yachting Monthly’s Dick Durham who is writing an article about the history of the boat. Peter Duck was Arthur Ransome’s last boat – his ‘marine bath chair’, bought from Ransome by Julia’s father (more about Peter Duck and Julia on http://golden-duck.co.uk/boats-peter-duck/). The connection with me is that I was lucky enough to have illustrated ‘Strong Wind Trilogy’, Julia’s highly acclaimed Ransome-inspired adventure series set very firmly in the 21st century. 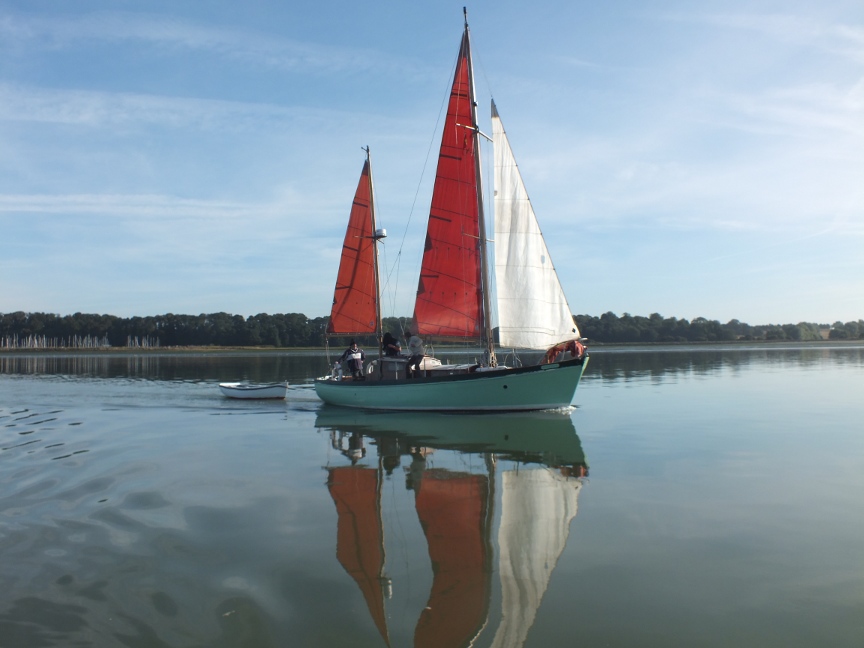 A visit to Pin Mill on the River Orwell always involves a close encounter with mud, especially when trying to find your dinghy at low tide after an evening at the Butt & Oyster pub. My boots, trousers and oilskin bottoms will have to be hosed down, along with Ellen’s deck, but a good time was had by all. Tomorrow, it’s back up river on the tide and back to the drawing board. My summer afloat is nearly over. It hasn’t all been plain sailing; in fact much of it has been spent cowering in a cabin shouting at the Shipping Forecast, but there have been good times along the way and it’s true what they say – life begins where your comfort zone ends!