What do you need when going over to a friend’s place for supper? Oilskins on, boots, torch. Supper – a container of caponata (aubergine casserole),  loaf of bread, bottle of wine, all in a plastic box with a lid. Then step carefully onto the pontoon, which is rocking in the gale even this far up river, and up the dark ramp, spitting rain and trying to dodge puddles on the towpath.  Down another (lopsided) pontoon and into the wheelhouse of a small Dutch barge where a glass of chilled wine is waiting in the warm cabin (Anne has a fridge!).

Less than two weeks ago it was still warm enough to sleep under a forehatch open to the stars; now I have the hatch firmly shut and wake up to a condensation-soaked duvet. It’s getting dark, too; no more evenings chatting with other river folk, watching the sun go down over the saltings with a beer in hand. My vagabond summer is nearly over and it’s time to go ashore, pay rent, behave like a grown-up! 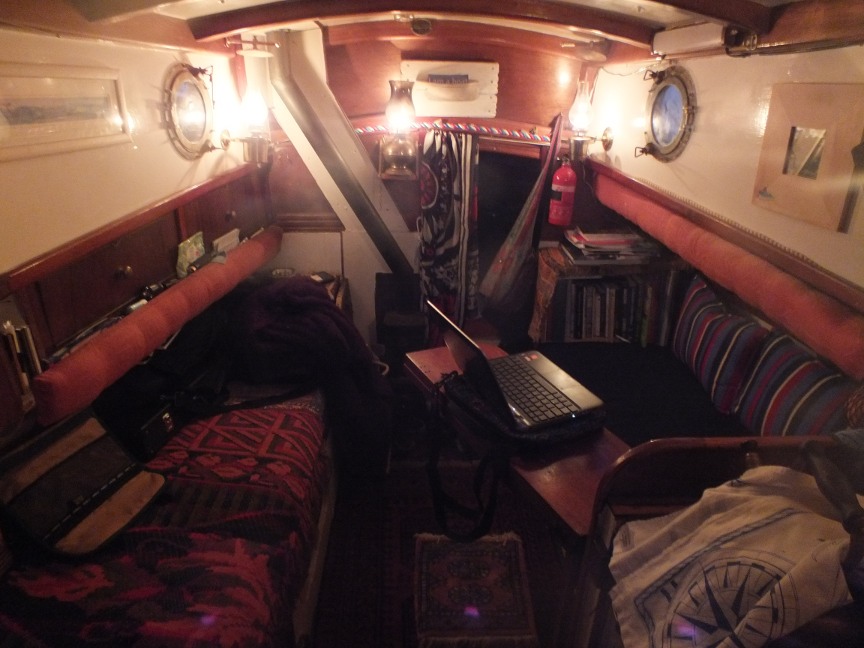 There have been good times and bad times afloat. Some of the disadvantages of living on a very small boat include:

–  lack of space for stuff.  Books, mainly.  A kindle helps, certainly, but I miss all my reference books and collection of maritime books.

– lack of space for clothes and shoes. In the summer I could keep it simple and just have one plastic crate for tee shirts, one for trousers. Now I have jackets, boots and hundreds of fleecy tops shoved under my bunk because I hate being cold. I can’t remember the last time I looked even remotely smart!

– lack of a really comfy place to sit.  This is not a feature of all small boats, just mine, because of the layout of the side decks. Yes, I know there are plenty of 24 foot boats with really comfortable berths to relax in, but on a limited budget I did the best I could!

– having to go outside and fill up the water container every day. Delightful in good weather, not so pleasant when the weather is rubbish!

– likewise, a visit to the loo or shower. A stroll across a boatyard in nice weather is fine; going for a shower on a chilly, rainy morning, getting undressed and then finding you’ve forgotten your shampoo or a 20p piece for the meter is not so much fun.

On the other hand, there’s a lot to recommend the simple life afloat:

– quality of sleep. I have slept well in my tiny foc’sle, even with condensation on the duvet. I don’t know why, but perhaps it’s a subconscious womb-like delight in being supported by water, rising and falling with the rhythm of the tide.

– sociability. Living ashore it’s not easy to chat to strangers, but on boats there are no locked doors and life is much more open. I’ve found people to be generally friendly, helpful and likeable, with only a few, best forgotten exceptions!

– fabulous views.  The river outside my cabin is constantly changing with weather and tide, but always makes me pause and appreciate. Evenings are best, soft light over the mudflats and the sparkle of moonlight on water.

Dusk on the river Deben – reflected sky in the flood tide.

– bird life.  Curlew, oystercatcher, egret, redshank, cormorant, and an assortment of geese and ducks populate the river – it’s their world and I’m privileged to share it. Oystercatchers are the boldest birds; earlier in the season I was awaken most days at 5.30am by the sound of their call and patter of feet on the deck.

– no television. To some, this may be a disadvantage, but I’ve found that I’ve missed tv not at all.  I have a radio and cd player on board, and found plenty to fill the evenings. I’ve read more books and practised more music than I ever used to when the little black box beckons. 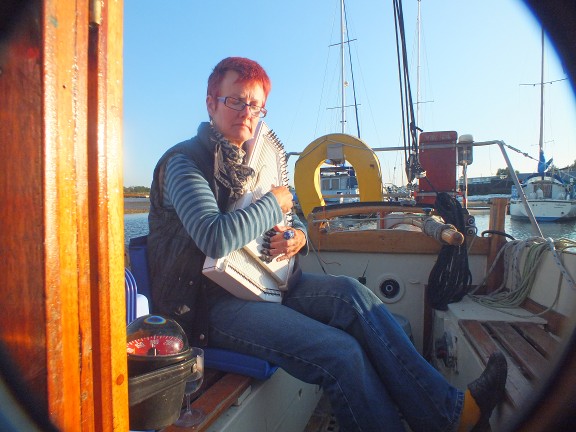 Ooh, what a strange look on my face.  Sorry about that, it’s the only pic I had of me having a bit of a strum in the cockpit.

– best of all, the feeling of being self contained. To be able to go sailing without all that exhausting faff of making lists of ‘stuff to take to the boat’, trying to remember what you left on board last time, then heading off having left your oilskin jacket at home. Then, when you’re away sailing, worrying about home, what you’ve forgotten to switch off, and whether the cat will have been sick on the carpet. All that kind of thing. Admittedly, the weather this summer meant that I didn’t wander as far as I would have liked, and much of the time was spent on other people’s boats – in fact, dare I confess that I didn’t sail poor Ellen further than the River Orwell and Stour? But there is still a deep satisfaction sailing somewhere in a boat that feels like home, and there are more adventures to be had, Ellen and I, next summer.

It’s been a while since I picked up a paintbrush – this was done last winter…. but there are plenty of ideas brewing that I hope to work on while shorebound – as long as I can resist the lure of distractions like tv!

1 thought on “Damp duvets and reflections”