Too much planning, not enough pencil time…

I’ve left it too long since the last blog post, not because of lack of things to say, but because there’s been a lot going on…. here’s a potted update:

I now have a spacious new studio on the banks of the lovely River Deben in Suffolk; sharing shed space with Waldringfield Boatyard  – as close to the river as I can get without being on it! There’s plenty of space to sell things too, so I’ve hung some paintings on the walls and brought in work by a few clever friends – photographs, cards, watercolours and even furniture made out of old charts. I’ll do a bit more of a feature on everything once I’ve got some good photos. 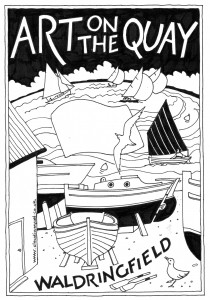 The official opening is this coming Saturday afternoon 6th April, so if you’re in the area and not already on my invite list, get in touch. Or if you’re sailing up this way in the summer (what summer??), call in. I’ll be there unless I’m not…. much of July and August will hopefully be spent bouncing around the British coast on traditional boats. It’s the 50th Anniversary of the Old Gaffers Association this year, which is an excuse for a celebration. Being fond of gaff rig, and fond of a party, I’ve invited myself on part of the Round Britain Challenge, as well as the final gathering at Cowes in August. There will be some challenging sailing, sketching opportunities and new adventures to be had before I come back to Waldringfield to catch up on some proper work.

This is the map of the OGA celebration cruise – as featured in April’s Classic Boat magazine. If it happens on schedule it will be a triumph of optimism over meteorology! But the planning involved in sailing is as much a part of the fun as doing it – warmer and drier too!

Meanwhile, all this moving and preparation has meant that I haven’t picked up a pencil for a few weeks, and Sam Llewellyn has just emailed through his wonderfully obscure list of illustrations needed for the next issue of Marine Quarterly. Better get on with it. 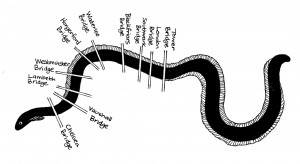 This was one of the drawings in the current issue of Marine Quarterly (www.themarinequarterly.com) Obscure? Oh yes, but highly relevant to the article it featured. To find out the meaning, hop over to www.steffanmeyrichughes.com where all will be revealed.

Better go and sharpen a pencil or two for Sam’s list or there’s trouble, and I have an expensive Chardonnay habit to fund. Bye for now!

2 thoughts on “Too much planning, not enough pencil time…”

« Keep off the mud