This month I have been voyaging in my slippers, had a storm surge in my studio,and discovered how fascinated most men are by large engines. I have earned little and spent a lot, valued the support of friends, danced in pubs and spilt lentil soup all over my laptop. At some stage soon I ought to acknowledge the fact that it’s Christmas and work out how to cook seasonal fare on a camping stove. 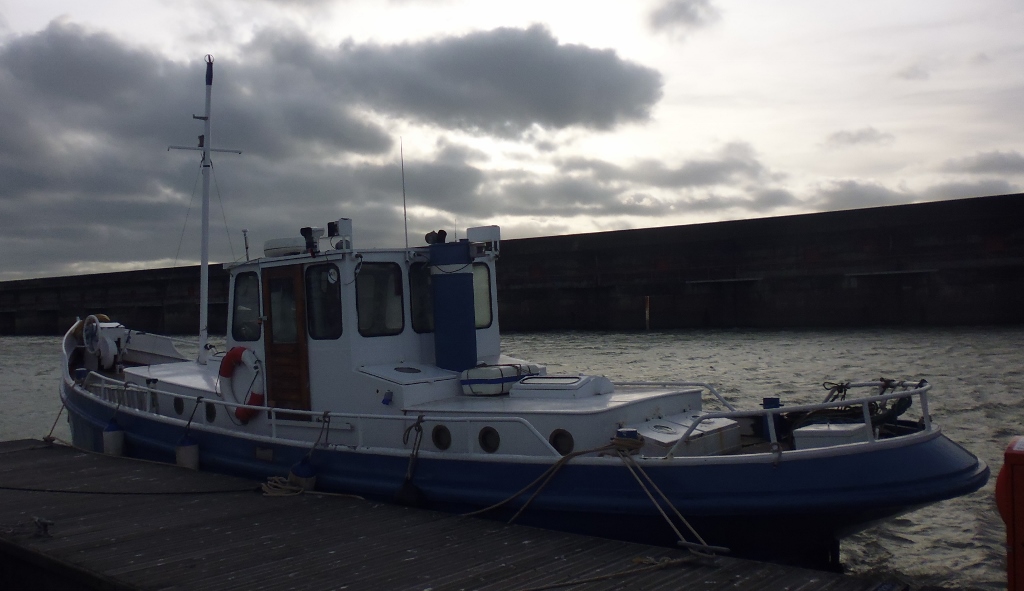 Safe from the storm – Else at Brighton

The main event  this month was bringing my new boat round from the River Taw in North Devon. Else is a century old Dutch harbour tug, complete with funnel. She is battered, beautiful and needs a complete refit below decks, but after two years of living nowhere in particular it feels good to have a roof over my head that’s all my own; especially a moveable roof that doesn’t leak! It took several weeks of preparation, getting broken gearbox fixed, trips up and down the M4, watching the long range forecast and making lists before we were anywhere near ready to leave. I was beginning to think I would never get her home, but thanks to the endeavours of the delivery skipper who took on the task of helping me, along with my two local expert crew, we finally broke free of the Devon mud at 4.30am on a chilly Monday morning at the beginning of December and headed down the River Taw. The forecast was due to be settled all week and the sea state calm enough to get round Land’s End and up channel  without danger.

The knot of anxiety in my stomach started to ease as we turned her bow east. It wasn’t all plain sailing; there were rough seas off Lizard and later off Beachy Head which caused us trouble, but the engine didn’t miss a beat and she was a joy to steer. As a sailor I’m not used to helming a boat from the comfort of a warm and dry wheelhouse. I’m used to  tugging at a tiller with cold hands in wet oilskins with the occasional dollop of wave down the neck as a reminder that this is real life and you have to suffer for your passions. 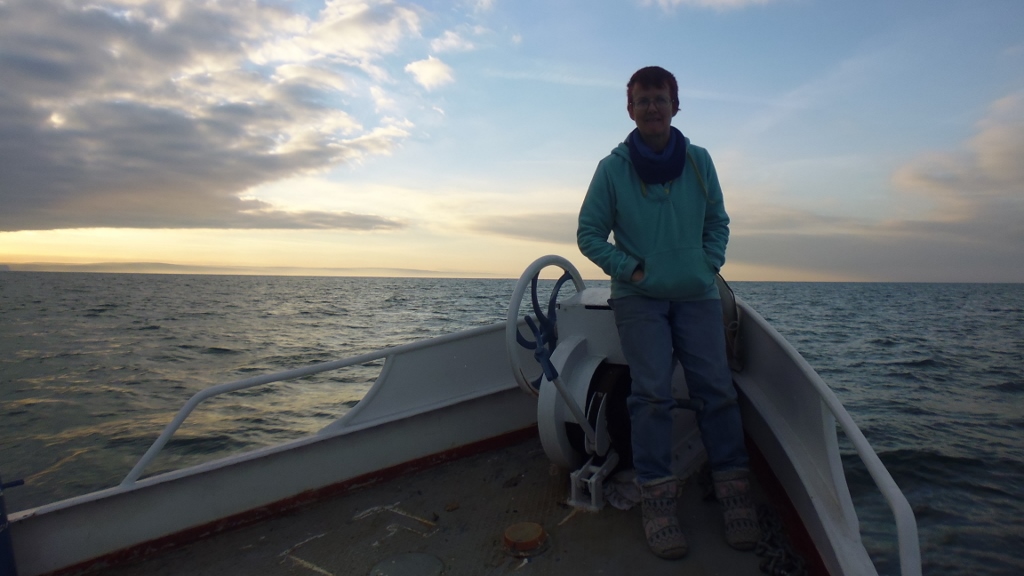 Somewhere up the English Channel, as I sat in the wheelhouse in my slippers watching the dolphins ride our bow wave, the forecast started talking about a storm brewing in the North Sea. By the time we were safely through the Solent and tucked up in Brighton, the coming storm had intensified but time was on our side; we watched the spray and waves pounding over the breakwater from the safety of the marina. 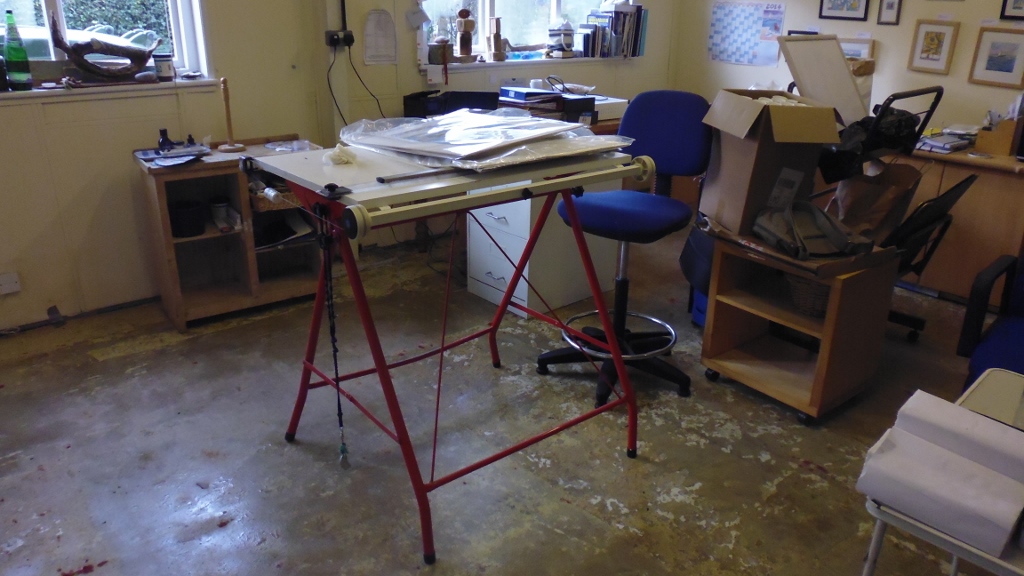 Chaos at the studio…. drying out

Meanwhile, in Suffolk, anything not afloat was taking a beating from the storm surge. My studio at Waldringfield Boatyard flooded to about half a metre, enough to cause chaos. Mark and Emma Barton, who own the boatyard, were there most of the night saving what they could as the waters rose, but the weekend that should have been a bit of a Christmas exhibition with mulled wine and mince pies turned into a clear up operation instead. Everything dry enough to salvage was put into storage and the soggy carpets ripped out. There was mud everywhere. I have to be philosophical about missed opportunities on the run up to Christmas – life is what it is, not what we would like it to be. Accept and move on, accept there is a price to pay sometimes for loving the river. 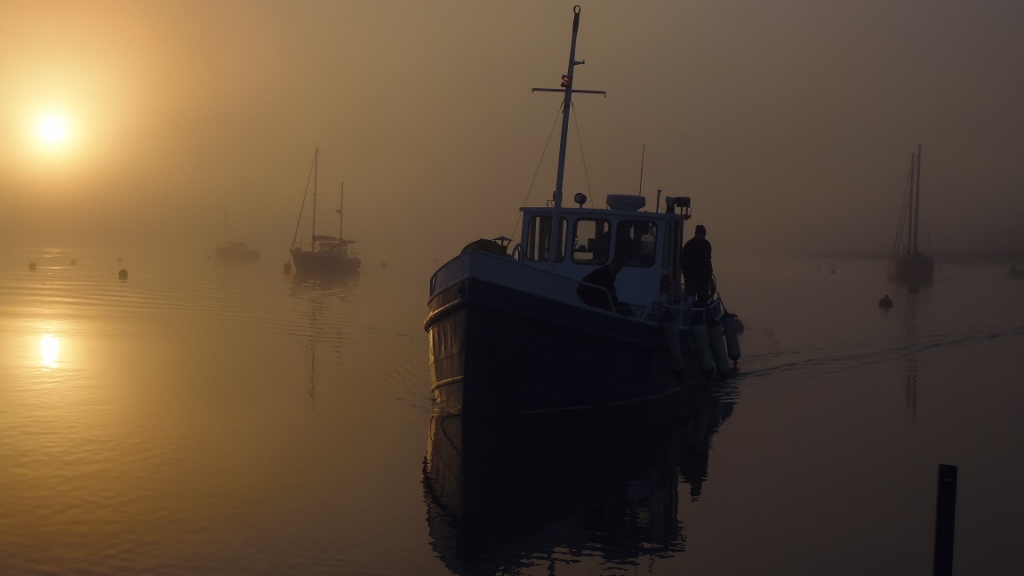 Amongst the chaos, my lovely boat came home, creeping up the river early one morning in thick fog. Thanks are due to delivery skipper Guy Morton, who believed that all was possible, and to my willing crew Tony Watts and Josh Masters. One big obstacle is overcome and now there are hundreds of smaller ones to tackle – wiring, gas, stowage, shower, rusty bilges, a million and one things that an old boat needs when she has fallen on hard times. I will be working hard in January; there is much to do and all of December seems to have been taken up with the business of living. It’s important at these times to take pleasure in the small things – a curlew that potters on the shoreline at low tide, the companionship of friends, the warmth of a fire as yet another gale blows outside. Apologies too to all my friends that I’ve missed the opportunity to send Christmas cards this year; that wasn’t the intention. Maybe next year will be calm, settled and predictable – though I wouldn’t count on it!

The week between worlds »