The week between worlds

As a fan of C S Lewis’ Narnia books, I loved the idea of the Wood between the Worlds; a silent place full of large round puddles. Each puddle was the gateway to a different reality, but you didn’t know where it would take you until you took a deep breath and jumped in.

The week between Christmas and New Year is a bit like that, in a small way, a time when you can pause for breath and nothing in particular is expected of you. You can take a break from relentless reality and jump in puddles; try a different way of being. For me, the deepest pleasure of the Week between the Worlds is the chance to lie in bed in the morning, with a cup of tea or possibly two, and banish the ‘musts’ from my brain. Must get up, must do stuff, must get this boat sorted out, get the coal in, finish this job,  must must must…… I had a ‘must’ free few hours at the beginning of each day and let my brain out to play. This is my boxing day pre-breakfast ramble, which turned into a fishy tale for the under-tens. 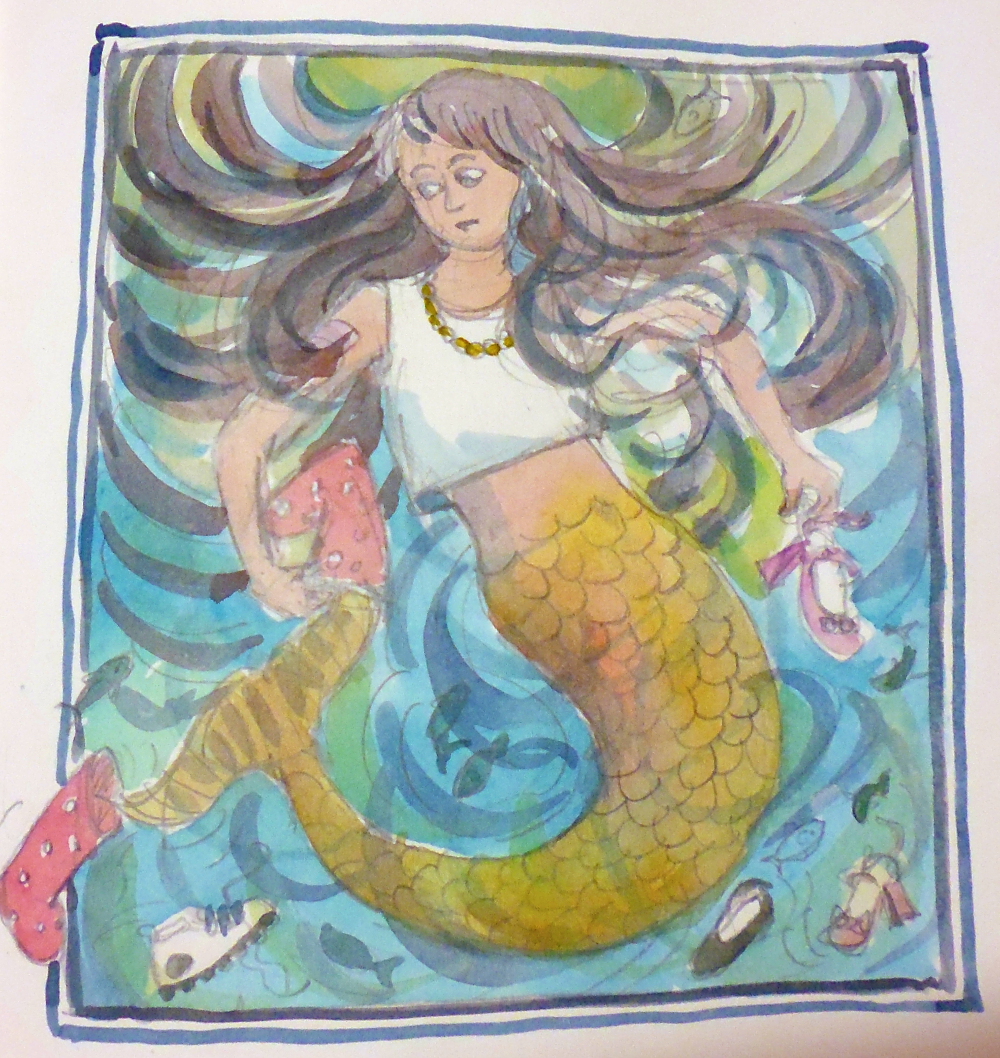 Silkie was a mermaid with a silver tail that swished as she swam. She could swim like a seal deep under the water, or she could sit on the rocks and sing like a seabird. Sometimes she watched the humans on the beach, trying to swim and finding it so hard because they had funny spindly legs instead of a beautiful powerful tail. Sometimes she watched the fish swimming past her home and felt sorry for them having no arms to carry with, no voices to sing with. Being a mermaid was the best ever!

When the winds blew and the sea stirred, Silkie stayed safe indoors with her brothers Sam and Seth, watching the water stir up the sand from the sea bed and swirl past their coral cave. Far above their heads, where the water touched the sky, the waves grew bigger and wilder. Ships carrying cargo across the world to fill shops with things for humans to buy rolled in the stormy sea and sailors were sick into buckets. Containers piled high on the ships’ decks began to wobble, and in waves so steep that the ship’s captain was being sick into a bucket too, one of the containers on one of the ships fell off into the stormy sea.

It floated at first, sloshed and tossed by the waves, but slowly water crept inside and it started to fill up and sink. Down and down it went, tumbling and turning, until it landed at the bottom of the sea.

Sam saw it first. ‘There’s something in our garden!’ he said.

‘It’s fallen out of the sky!’ said Seth

‘What is it?’ said Silkie

‘Careful’, said Seth. ‘It could be full of aliens!’

The door to the box had broken as it fell, and Sam wriggled inside. He came out with a pair of shoes – but of course he didn’t know they were shoes.

‘Now what in ocean do you think these are for?’ he said.

‘I know!’ said Silkie. ‘They’re shoes! Humans have them on their feet’.

Sam and Seth laughed, but Silkie swam into the container and pulled out more shoes. Some were glittery high heeled evening shoes; some were soft leather pumps. There were sequined sandals and trainers with long coloured laces. There were wellies with pink spots and fluffy slippers with cat’s faces on them. They were beautiful and Selkie wanted them all. She pulled every pair out of the container and laid them out on the sea bed. Then she sorted them in order of favourites – that took a while. How do you decide whether you like the furry snow boots better than the glittery dancing shoes? Some of the shoes had tumbled out of the container on the way down, and Selkie swam around looking for them, carefully finding every missing pair.

Then she began to cry. ‘What’s the matter?’ asked Sam and Seth

‘I have 79 pairs of beautiful shoes!’ said Selkie

‘And I can’t wear any of them!’ said Selkie with a sob and a sniff.

True, they didn’t. Selkie watched the humans play on the shore and didn’t laugh at their funny spindly unfishy legs any more. She watched their feet and they way they could run and jump and kick; she watched them take off their shoes, their beautiful shoes, when they wanted to play in the water. She hated her fat fishy tail that made her swim faster than a seal, she wanted legs to match her arms. She became sad and grumpy.

Brothers are annoying sometimes. Silkie swam off and sat on a rock near the shore. She started to cry, and didn’t see the boy until it was too late to splash into the sea and pretend to be a seal.

‘What are you?’ said the boy. ‘Funny looking seal!’

‘I’m not a seal!’ said Silkie. ‘I’m a mermaid! And you’re not supposed to know I exist, so don’t tell anyone.’

‘Because I’ve got a big fat fishy tail and I’d rather have legs like humans do.’

‘Because I’ve got 79 pairs of shoes and I can’t wear any of them!’ Silkie began to cry again.

‘Well, I have legs but I don’t have shoes,’ said the boy. ‘Only these trainers and they’re about to fall apart. I live in a poor village and lots of people don’t have nice shoes.’

‘Oh’, said Silkie. She had shoes but no feet, and the boy had feet but no shoes. She had an idea. ‘I’d better go,’ she said. ‘But come here again tomorrow. And remember, don’t tell anyone!’

Silkie went to the cave where she kept her shoes, all laid out on shelves of rock. They were set out in rainbow colours this week; last week they were arranged in order of sizes. She put as many as she could fit into an old fishing net, swam to the shore and left them on the rock where she had met the boy. ‘Goodbye lovely shoes!’ she said. From a safe distance she watched the boy pick up the net. ‘Thank you, mermaid!’ he shouted with a wave, and carried the net home.

The next day she brought some more. The boy was there, wearing the trainers with red flashing lights in the heel. He had a girl with him, wearing the blue spotted wellies. ‘Thank you, mermaid!’ they shouted, and waved at the empty sea.

There was just one pair of shoes left in Silkie’s cave when she had finished. Her favourite sparkly high heeled evening shoes made a lovely home for two pet hermit crabs Henry and Harriet.

From time to time Silkie swam to the beach and watched the humans take off their lovely shoes to paddle in the sea. She gave them a wave and a splashy flick of her beautiful silvery tail.

That’s enough short tales and mermaid’s tails. There have been one or two rare days of sunshine inbetween the gales, so here’s a sketch of the harbourmaster’s hut at Felixstowe Ferry as a reminder that wobbly things can be much more appealing than perfect things. I wish you all the best for the coming year; fair winds and fair tides to everyone who has taken the trouble to read my blog. I appreciate your support! 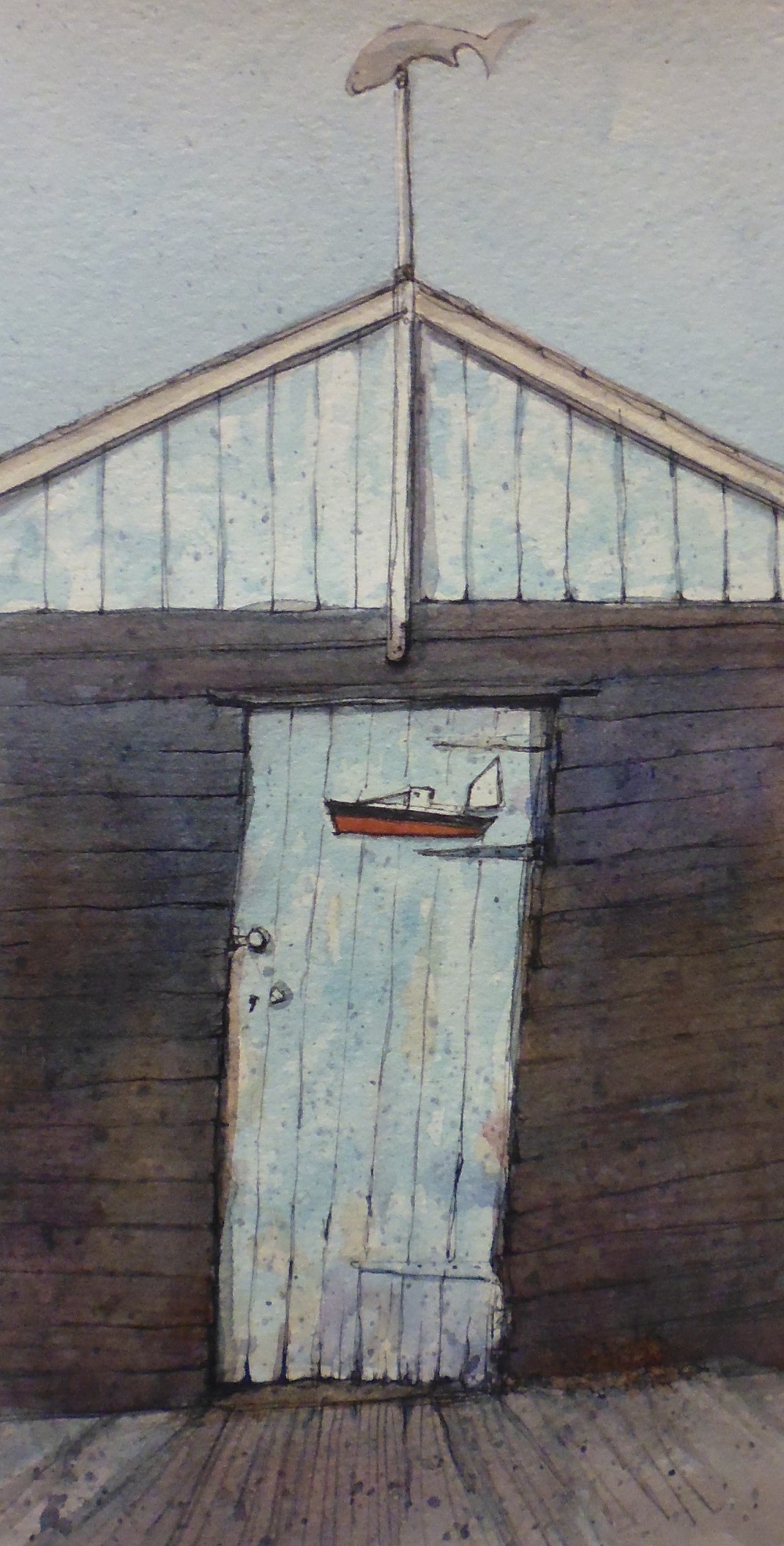 6 thoughts on “The week between worlds”

From muddy puddles to moules frites…. »