Well, New Zealand was a surprise. It’s been on my list of ‘places I’d love to go to one day’, but I hadn’t had time to research our ports of call – Auckland, Bay of Islands, Wellington, Akaroa, Dunedin and the fjords. I loved them all but these were the highlights:

Bay of Islands – oh what a sailor’s paradise, blue sea, rocky islands and white sandy coves. We were dogged by bad luck here. Delays in getting ashore from the anchorage (mechanical hitch with the tender boats from the ship) meant we missed our chance to sail on R Tucker Thompson, a lovely gaff schooner that I knew about and always wanted to sail. The timing of their day trips would have been perfect if we’d been able to get ashore on schedule. We decided that the next best thing would be a ferry ride to an island beach, but when we arrived we were told that the return boat had mechanical problems so we had to turn around and go back again, or we would not get back to the ship in time. Sorry we missed you, R Tucker Thompson! 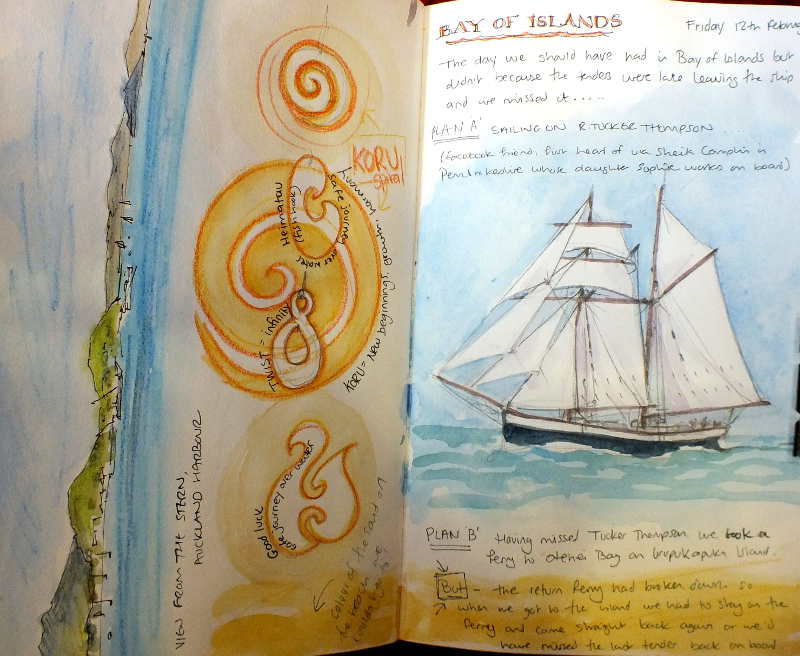 We had to settle for lunch and a wander around Russell, which luckily was a delightful waterfront town. We watched the schooner ghosting home with the sunshine on her sails in the gentle late afternoon breeze and vowed to come back again some day.

– Akaroa, a waterfront town with a distinct French flavour in the middle of a volcanic bay. Here we had arranged to meet up with friends from Christchurch who took a break from the ongoing earthquake rumblings to give us a tour of the surrounding mountains. In the hot sun and clear air we picnicked on wine, cheese and biscuits and I sketched the ship anchored far below in the bay formed by the volcano’s crater. At this distance and height, the ship was no bigger than my thumbnail. Thanks Viv Head and Betty Pearson, what a treat!

The next day, I finally managed to go sailing, just for a short while. A local Arthur Ransome enthusiast, Peter Dowden, got in touch when he discovered I was coming to Dunedin. Peter is a mutual facebook friend of Julia Jones whose books I’ve illustrated – the Strong Wind series – and he was keen to take me sailing when he heard that I’d missed my chance in Bay of Islands. Now Peter doesn’t own a boat at the moment, but considered that a minor setback. He managed to borrow a dinghy from the helpful Broad Bay Boating club in Otago Bay and so there we were, finally under sail in New Zealand waters. He had also persuaded the Otago Daily Times that there was a story to be told, so for a while Peter and I sailed around with a slightly confused journalist and his notebook whilst he tried to piece together the connection between me, the cruise ship, Peter, Julia Jones, Arthur Ransome, boats and books in general. Every so often I had to ask him to move so I could get at the jib sheets. Thank you Peter Dowden! (Here’s the link to the article – he didn’t do a bad job of making sense of it all:   http://www.odt.co.nz/lifestyle/magazine/373618/shooting-breeze)

New Zealand had one more surprise, and that was the fjords at the southwestern edge of South Island. The temperature dipped to 13 degrees and the weather turned cold and rainy as Aurora turned into Dusky Sound and threaded her way back to sea through the rock strewn channels round Resolution Island. Then we turned into Doubtful Sound and finally the even more majestic Milford Sound. Even the names are enough to thrill, and wonder at the feelings of early explorers navigating this labyrinth of sea-filled mountains with no charts and no engines. James has downloaded the New Zealand charts on his laptop, so we could zoom in on places like ‘Anxiety Point’ and Disappointment Island’. What names! Early sea exploration must have been a stressful business, alternating between terror and tedium. 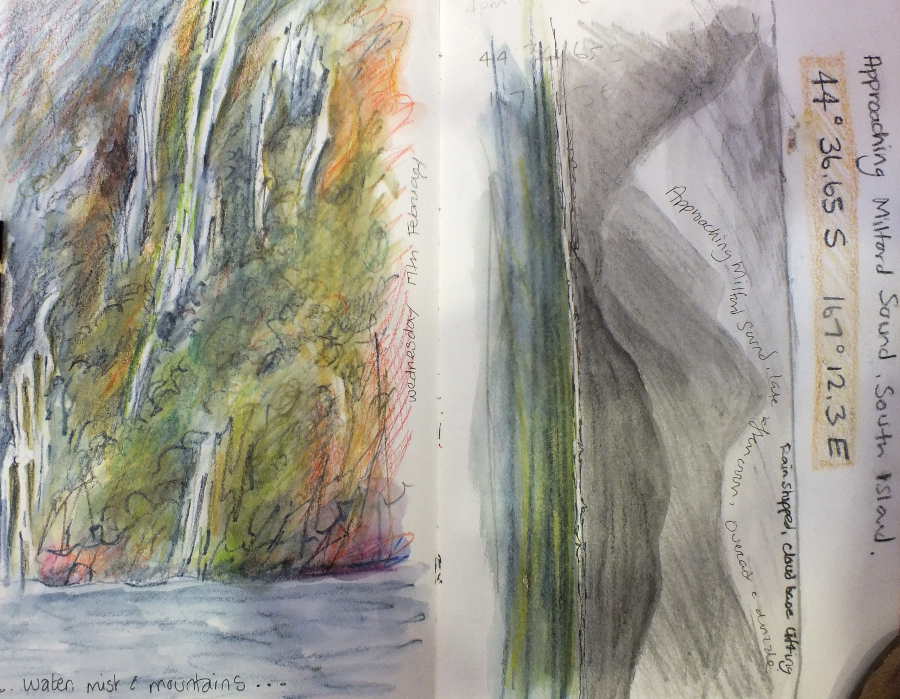 I stayed on deck most of the time, trying to draw the shapes of the rocks and the streams of waterfalls cascading down the vertical sides of mountains so high that the tops were shrouded in mist. Most of fjordland is uninhabited, true wilderness, and New Zealand protects it well. Only in Milford Sound did we see signs of human life, in the pilot boat that escorted us into the entrance and the small harbour at the end of the sound, dwarfed by the biggest waterfall I have ever seen cascading down the cliffs and almost obscuring it in spray. ‘This is much more impressive than Norway’, said the passenger leaning on the rail next to me. It was certainly a day I will never forget.

One of the quirks of cruise ship life is that the ship’s varied entertainment programme carries on its mission to provide plenty of ways for passengers to spend their time, especially on sea days. This results in some strange and contrasting experiences. I’m not much of a sports fan but I have always loved ice skating (still miss ice dance), and one of my sporting icons is Robin Cousins, Olympic Gold Medallist after the legendary John Curry. Robin was on board but I couldn’t get to his first talk as it clashed with my watercolour sessions, but on the day we cruised through the sounds, he was giving an afternoon lecture whilst I wasn’t teaching, so I was able to attend. What a treat, and what an inspiration. I can now say I held Robin Cousins’ Olympic Gold medal whilst cruising through the earth’s last great wilderness. Sometimes life is full of contradictions! I was interested in Robin’s approach to the nerve wracking moments before an important event, when you are there in front of the judges waiting for the music to start. ‘Use the butterflies in your stomach to help you fly’, he said. ‘You are only aiming to be the best you can be on the day.’

Now we’re in Sydney and journey’s end, checking in to Sydney Harbour Youth Hostel and adjusting to life ashore. The art classes on the ship ended with an exhibition and a bit of a party to send me on my way.

« Art lessons across the Pacific 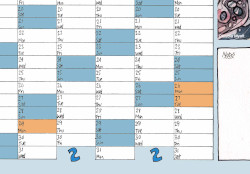