Art lessons across the Pacific

Since last writing, I’ve crossed the equator and the date line. I’ve visited Maui, Honolulu, American Samoa and Western Samoa, and we’ve just docked at Auckland, New Zealand.  During the last weeks I have taught classes on colour mixing, perspective, the joys of sketching, the importance of letting the paint dry between washes, and I’ve impressed on all my students that being an artist, at any level, is a one way ticket from which there is no going back. Even if they never want to take it further, they will from now on see everything around them as colour, shape and line, and their lives will be enriched by the process. 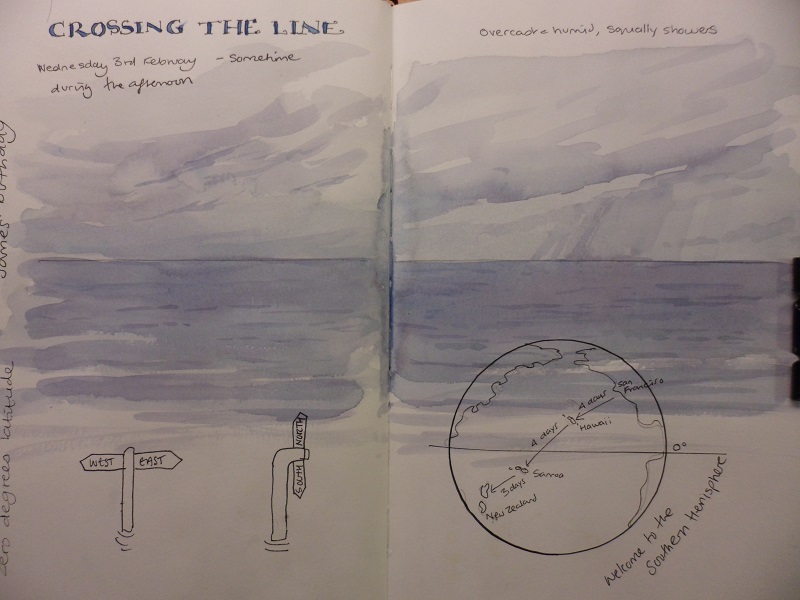 Lessons only happen on sea days, so it’s a treat to have a day off on harbour days. We get less than a day at each stopover, so time to explore is limited. I have no budget for transport, so we get off the ship as early as possible, run the gauntlet of the taxi and bus drivers touting for business (‘Very good price, all around the island, Ma’am, for you $20…’) and start walking. Sometimes this works and we discover beaches and villages; sometimes it’s less successful and we only see the grotty bits of a container port. Maui was a delight as we were anchored in the bay outside the former whaling port of Lahaina, with lots to see within in a small area. It was easy to get back on board ship for lunch on deck, which was interrupted by two adult humpbacked whales and one baby cruising round the ship. Obviously puzzled by this large object in front of them, they swam down the side, surfacing regularly. 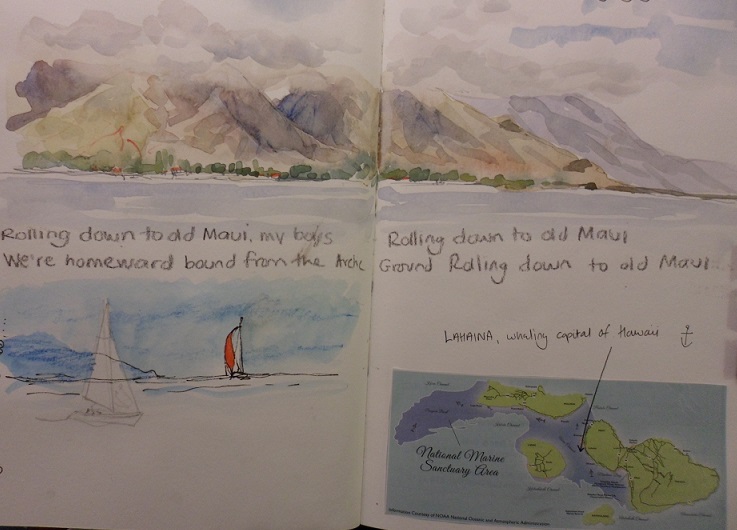 We went to bed in Maui and woke up in Honolulu – a city again, but a city with a beach and our first taste of Pacific swimming. Four days from Honolulu (at 500 nautical miles a day) we arrived at American Samoa and then it was a short hop across the date line, losing Saturday 6th February on the way, to get to Western Samoa. These are the most remote islands on the trip, almost midway between America and New Zealand. At Pago Pago, on the island of Tutuila, American Samoa, I had a swim from a small beach close to the harbour, then sat and sketched the turquoise sea and tall volcanic mountains around the bay. 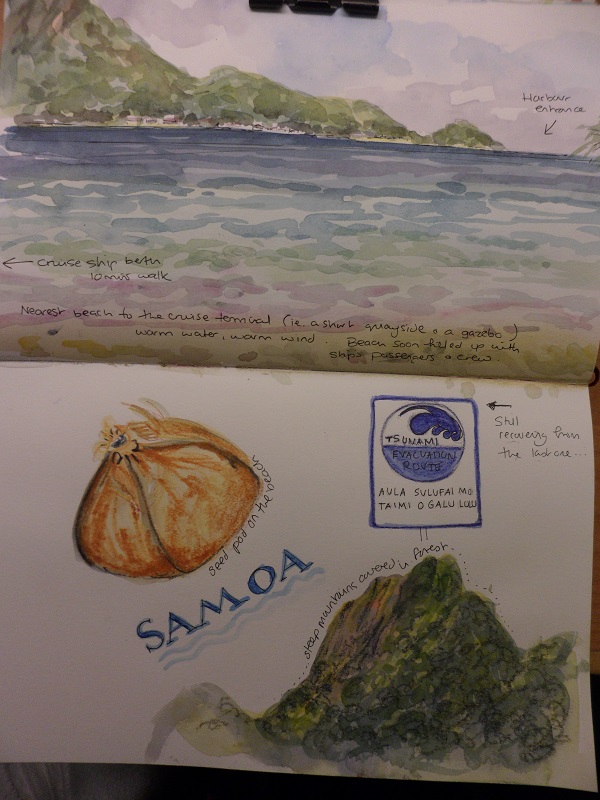 Hot and humid Upolu in Western Samoa was the island of a thousand taxis, all white and well kept, all touting for business around the ship and wherever we walked. What do they do when there’s no cruise ship in town? We found a tiny but shady marine reserve, the shallow sea prickly with coral. We strolled around local streets and village, each house with the graves of their ancestors in the front garden, and amongst the houses the open sided meeting houses for community gatherings and, of course, dozens of churches.

Upolu was Robert Louis Stevenson’s island, the place he chose to spend the last years of his life. It’s extraordinary that he should have chosen somewhere so remote to live. He would probably be shocked to see his island today – still beautiful but blighted by litter: 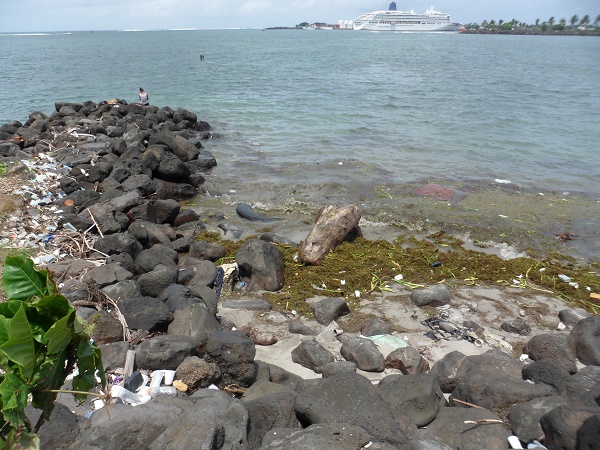 Please, please, please, take away the coke cans, polystyrene burger trays, plastic bottles and other rubbish that litters your beautiful beaches, lies wedged between the rocks of the sea wall, and along the ditches by your well kept houses. What’s the point of designating an area ‘marine reserve’ if all the island’s plastic is washing into the sea, which is now, I gather, as full of plastic as it is plankton, throttling the life out of the oceans? The island is not yet developed for tourism and it’s obvious that you don’t yet notice that there is a problem. I can imagine that waste disposal on a small island is difficult, and recycling not possible, but there has to be a better way. I would love to come back to a cleaned up Samoa – the Pacific islands are special and I’m glad to have visited, if only for a day.

I would love to revisit these islands, (under sail would be nice! Though cruise ship working is marginally easier…) and would like to visit R L Stevenson’s house which I’m told was fascinating. I’ll make a note to read up on his life as there is an enduring appeal in the idea of ‘Treasure Island’, even to a modern generation who hasn’t read the original books. 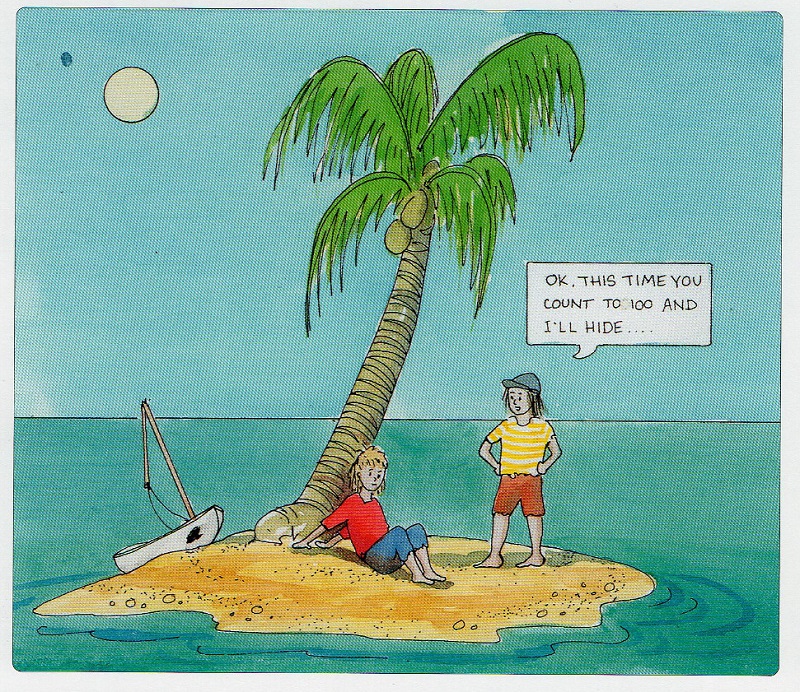 Unsurprisingly, there was no internet connection available in Samoa (not accessible to the casual visitor at least). Sadly, each of the Samoan islands had a McDonalds. How far do you have to go to get away from Maccie D? Mars? And no, they didn’t have the saving grace of wifi! So when my regular cartoon for Practical Boat Owner was ready to send, I photographed it and was luckily offered a few minutes internet time from one of my students. On-board internet is not fast and it’s very expensive to buy as you go (50p a minute – satellite connections don’t come cheap!) but some of the round the world passengers have a more sensible package. So if you’ve emailed or sent me messages, apologies for the delay and I will stay drinking tea in this Auckland harbour coffee bar until we use up our one-hour’s worth of free wifi! 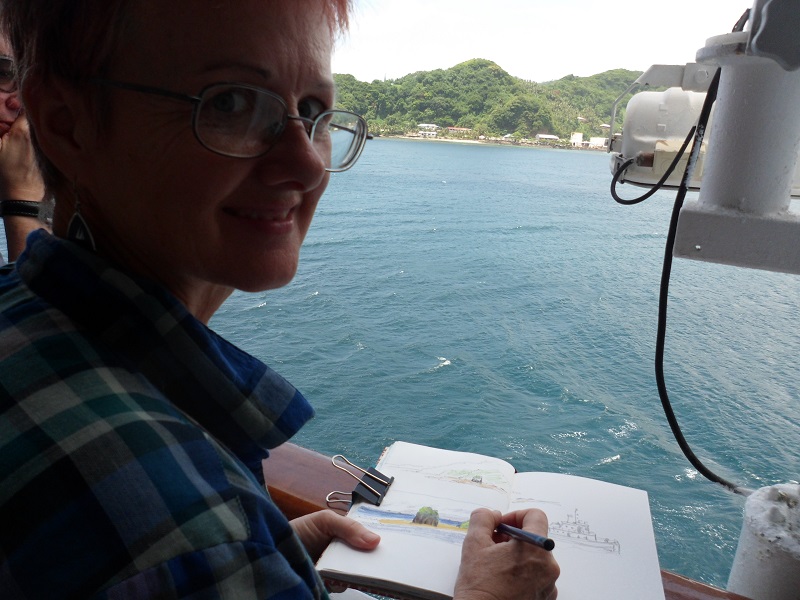 Sketchbook is filling up – farewell to Samoa, hello New Zealand!

2 thoughts on “Art lessons across the Pacific”

« Rolling down to Old Maui