The hills are alive…

First, a diary extract from July (yes I know, should have done a blog post weeks ago! Bear with me while I catch up)

Youth hostels are extraordinary places. For £12 a night I have a bed overlooking Lake Windermere. The evening light shining on the water makes me long for a small boat and briefly I wonder why on earth I have chosen a land-based holiday rather than my usual traditional sailing boat adventure. 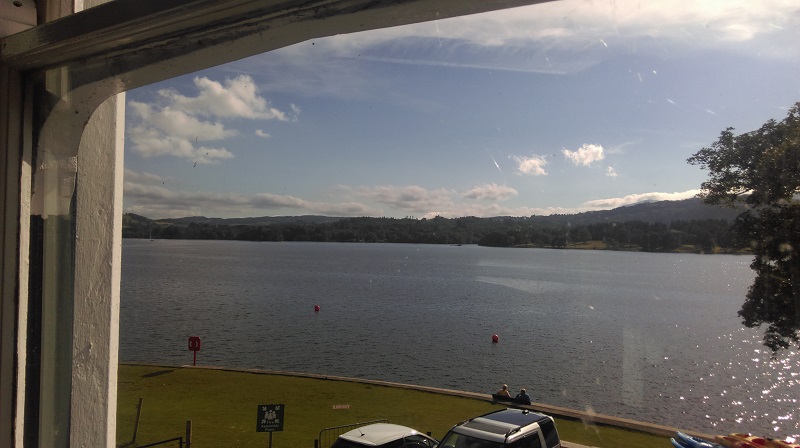 I share a room with five other women of diverse nationalities – Korean, French, Taiwanese, Australian and an elderly Japanese lady. She is travelling alone and only knows four words of English: ‘hello’, ‘thank you’ and ‘Beatrix Potter’. We bow and smile a lot and I use mime to help her to get down from her top bunk – the ladder is steep and she doesn’t realise at first that she needs to turn around and go down backwards.

There is not much sleep to be had in the hostel; the Japanese and French ladies snore loudly, and the nights are hot, but it’s a great location. One of the pleasures of travelling alone is the ability to do what you like, when you like, at your own pace. I walk, catch ferries, sketch, find a waterfall, wander round Ambleside and Bowness (oh my goodness, the crowds!), sketch some more, read a book outside the hostel with my feet in the water and a glass of wine in hand, go kayaking and even, on the hottest day, go for a swim in the lake. For some reason I’m still feeling lethargic and mostly queasy, so I’m not dashing around exploring as much as I could. 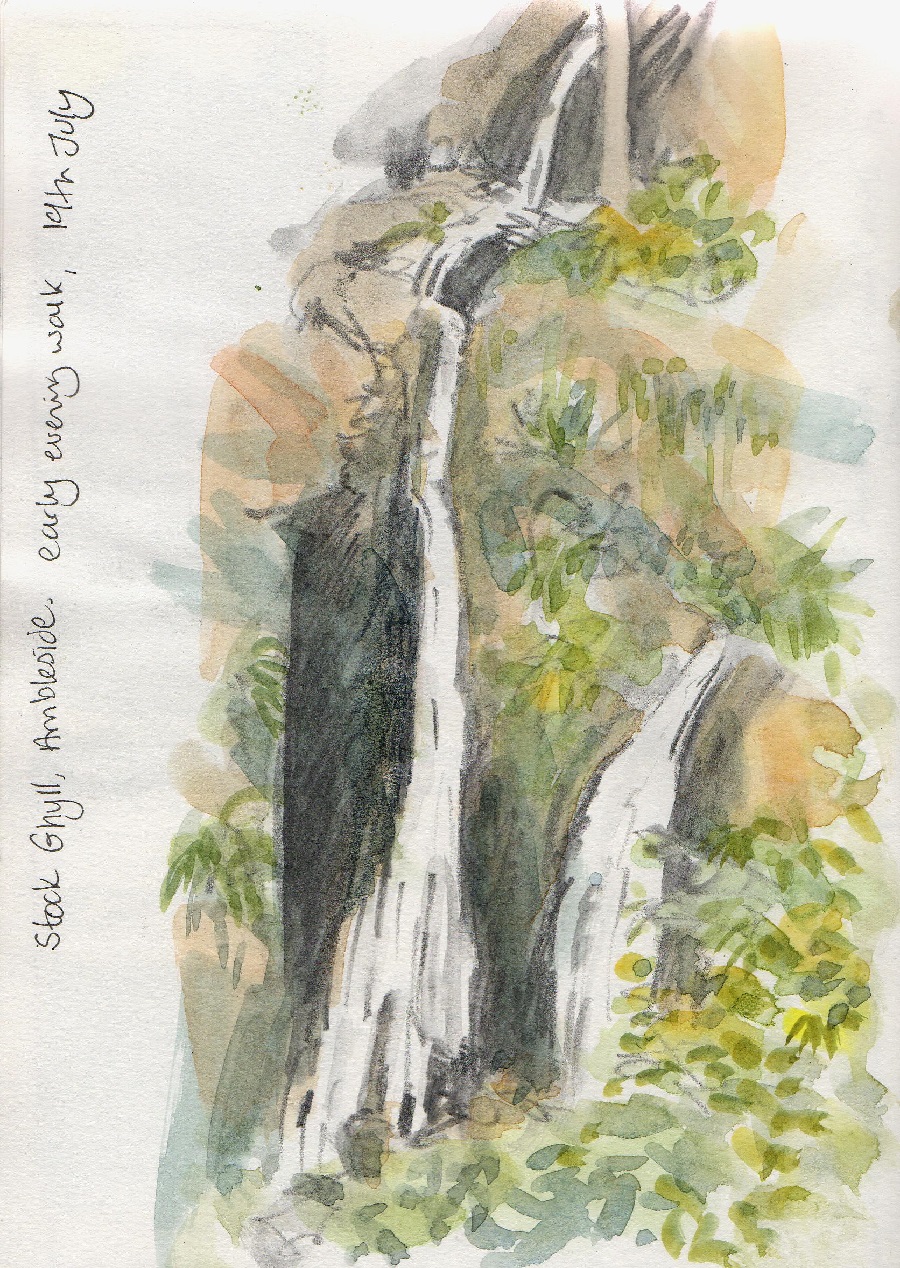 After three days at the hostel I move to higher ground, pitching my little tent in the tidy arms of the National Trust at Great Langdale campsite. I spend a day climbing up the steep track to Stickle Tarn; it’s obviously a popular trail as it’s busy. The hills are alive with sound of shrieking teenagers on school trips, in hard hats and cagoules, being coaxed up waterfalls by hearty instructors festooned with ropes.

Sketching in Cumbria involves umpteen shades of green – outside my comfort zone but I have a go. As I say to my students, it’s the doing that counts, not the result! 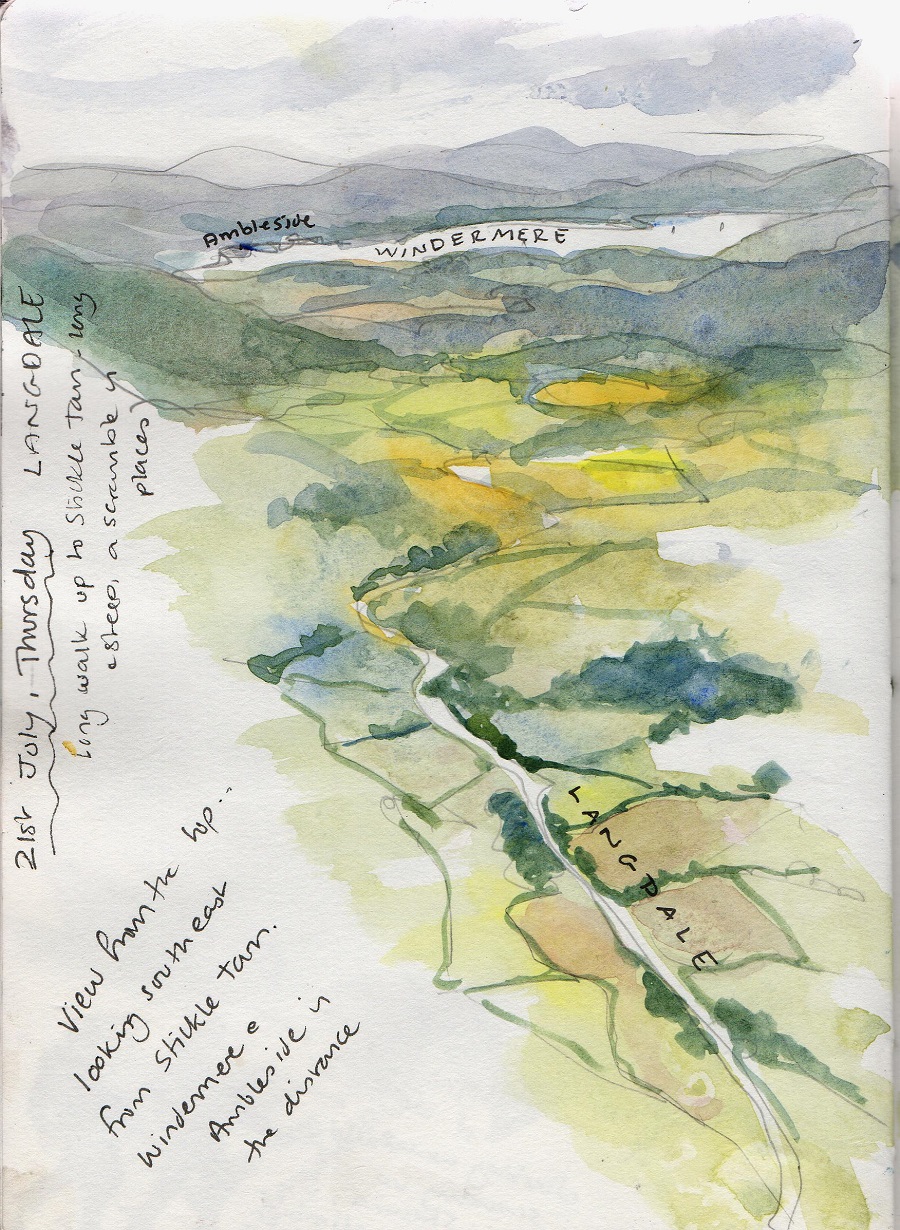 While I clamber the Cumbrian hills, many of my sailing companions are over in Brittany, where several hundred traditional boats are enjoying the famous Brest and Douarnenez festival, the largest gathering of traditional sail in Europe. It takes place every four years and have sailed to all but one since the first in 1992 – except this one. Of course, having decided not to go I then received several invitations to crew, to join in, to take my stuff down and exhibit, but this time I chose to seek silence ashore rather than noise afloat, however jolly the noise might be.

I have a good reason for turning my back on the crowds, apart from the desire to visit somewhere new and try travelling by wheels not keels. Other tinnitus sufferers will know that conversation in noisy places is difficult or impossible, and the festival at Brest is very, joyfully, loud. (My trick for dealing with tinnitus, by the way, is a bit mad – I tell myself that the high pitched sound in my head is only the sounds of the moon and stars in orbit, the music of the spheres, and I am privileged to hear it. Well, it works for me most of the time!)

After a few days in the lakes, my faithful Mondeo (‘Cor, never seen a P reg Mondy still on the road!’ said the young mechanic who coaxed it through the MOT) takes me further north to Moniaive in Dumfries and Galloway. Moniaive is a small town a long way from anywhere with two pubs, one shop and a great attitude. It has styled itself ‘Festival Village’ and undeterred by its remote location stages a year long series of festivals, mainly musical. I’m there for the Scottish Autoharp Weekend, looking forward to an intensive day and a half of learning, workshops, playing music with friends old and new, and general immersion in gentle music – restful for my poor ears and nourishing to the soul. 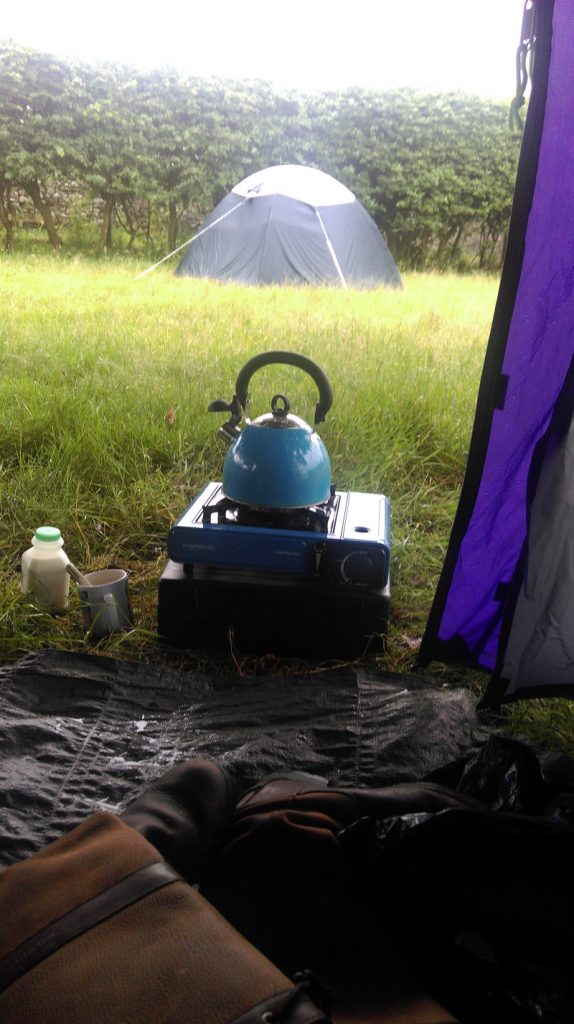 It rains, of course. There is no campsite but one of the residents has thoughtfully provided a field for campers as there is an indie music festival running in the village at the same time. To begin with, there is only one tent in the field; huddled inside and oblivious to the drizzle are three happy Glaswegians gathered round a crate of tonic wine, into which they have already made serious inroads. ‘Come in, sit down, have a drink!’ they offer but I decline and get on with setting up tent.

Two days later, inspired and restored by a non stop music workshops, I bundle up my damp tent, load everything back into the car, and head carefully home. Sometimes quiet adventures can be just as rewarding as the daring ones, and travelling alone has a great deal to recommend it.

That was back in July; now back in what is laughingly known as normal life, I took a break from painting boats to do some boat painting of a different kind. ‘Else’ is over a century old, and her battered iron hull needs more attention than I can give her, but I do my best, and get her lifted out every two years for a bit of slap. Boat maintenance requires time and money, both of which are in short supply. I don’t want to take time of work at the moment but I solve the time problem by dashing home a bit early and getting a coat of paint on in the evenings, which is a good reason for getting lifted out in the middle of summer. I also recruit a bit of help from some friends. I get the boatyard to do the jobs I can’t do or would take me too long, and solve the cashflow problem by taking my private pension as a lump sum. (you know – the one you started during your first ever job and now promises an income of life of threepence a year, so the ‘lump’ involved is about the size of one of Else’s barnacles, but it covers the basics).

There’s plenty more to do, of course, but my little ship is looking a bit smarter and I have learnt far more than I ever thought I would want to know about rust, paint, anodes and steel from various boatyard experts who wander up and take an interest. Well, it’s good for old ladies to have a hobby!

This partly because I have a problem with my eyes at the moment (to be resolved by eye operation coming up soon, hooray for the NHS).  This means that my own plans to be at Southampton Boat Show with Dave Selby are foiled, but go along and see Dave who will be there exhibiting his own tiny boat and raising awareness both for small boat affordable sailing and for his charity Marlins Mission – http://southamptonboatshow.com/Press-Centre/2016/July/Get-afloat-with-Marlins-Charity-Mission.

I’ll be there in spirit!

3 thoughts on “The hills are alive…”

« To Scilly with a sketchbook, and other fragments