So there I was in a swimming pool on the Algarve and in jump some Fisherman’s Friends (the Shanty Group, not the throat sweets). Folk Trio the Young ‘Uns are already in the water and mucking around with a rubber dinghy – two of the band are trying to tip David Eagle into the water by spinning the dinghy round and round. David is having none of it; in spite of being blind he is standing up in the boat and belting out a song.

The Young Uns write songs that make you laugh and cry, often at the same time – http://www.theyounguns.co.uk/video/matilda-flowers/ and they were one of the highlights of the Costa del Folk festival in Portugal, along with many others (check out The Changing Room, with Sam Kelly and Tanya Brittain and their beautiful songs about real people and places – the music is fresh but it’s also as old as time https://www.youtube.com/watch?v=_0YYrfl7hfI). The festival is a great idea; take the pick of amazing musicians and transport them to a large hotel on the Atlantic coast for about the same price, including accommodation, as the same calibre of festival in a soggy field in summer (www.costadelfolk.co.uk). It was humbling to see such a range of songwriting talent and superb musicianship, especially amongst the young, and then, because this kind of music is so inclusive, there’s the chance to sing and play along with the professionals at all night jam sessions in the bar. The future of ‘folk’ music in its broadest sense of the word – roots and acoustic, songs from the heart, stories and tunes – is in good hands.

September has been all about music, partly because there was a big birthday in there and I decided to spend as much time as possible with people and things that are important, but partly because art has been off the agenda due to a cataract operation. Over a month on, vision is not a lot clearer so it’s back to the hospital tomorrow, but hopefully all will sorted eventually. In the meantime drawing detail involves squinting close over the board with reading glasses on, then cursing and taking them off again.  Several projects are taking me longer than usual, like next year’s wall planner. It’s done now and at the printers, so it will be online to buy in a couple of weeks – here’s a wobbly photo… scan to come! 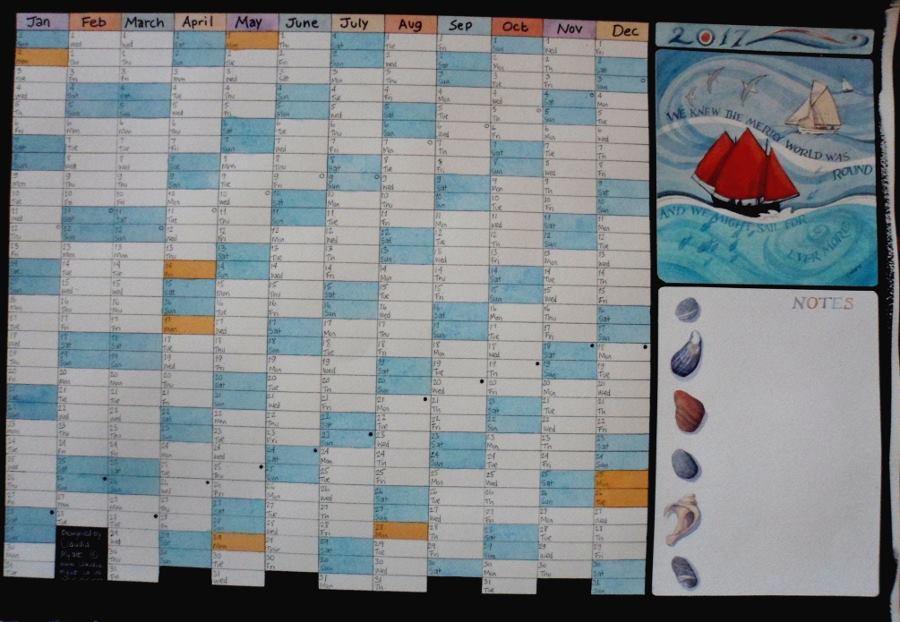 Luckily, teaching doesn’t involve too much eye strain, and my regular watercolour class has got going again. I’m also doing quite a bit of ‘kitchen table’ teaching, with individual or small groups of friends, which is always satisfying as it’s possible to focus on what each person needs or is getting stuck on. I like to make the process of learning so enjoyable that you want to play around with it as much as possible inbetween lessons. The phrase ‘I ought to do some more sketching’ means that it won’t happen – life is already full enough of ‘oughts’ and ‘shoulds’ without loading them onto the time spent with things you enjoy. And if you love the feeling of mucking about with colour, sketches and lines without any judgement on whether they’re ‘good’ or not, then you’ll make progress naturally…. you have to do it wobbly before you can do it well. The problem we have with learning something new as adults is that we want to do it well or not at all – but like any new skill there is no avoiding the wobbly stage (sorry, starting my teaching rant there!)

Finally…. I’ve moved studio! After four great years at Waldringfield Boatyard, it was time to move to somewhere with more space now I have the printing presses for mugs and coasters. Emma and Mark at the boatyard are going to be using the old shop space for new boaty projects, but in the meantime Emma and I are holding our final ‘Art on the Quay’ festive exhibition on 18th – 20th November (5.30-7.30pm Friday preview, 11-4 Sat and Sun). We’ve invited a few local artists and craftspeople to join us, and will put some fizz in the fridge. Come along if you’re within reach of Waldringfield! 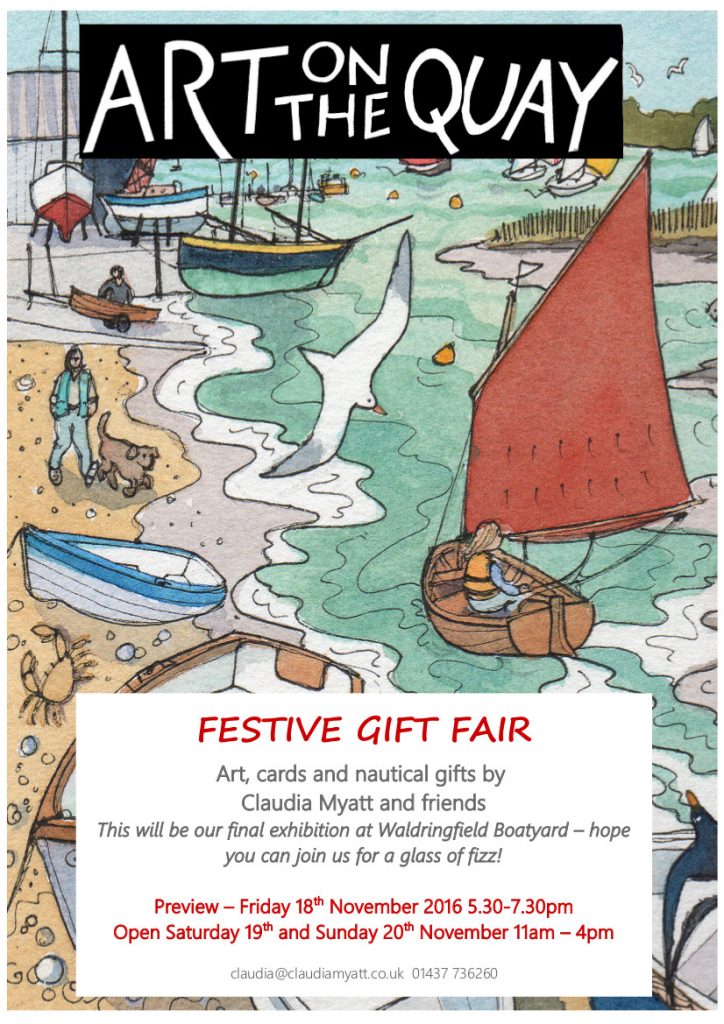 My new studio is not far away, in a converted stable near Martlesham Creek. I’m told it’s the space that hostage John McCarthy rented when he returned to Suffolk to write his book after his release, so it should be good for creative ideas.  It’s down a leafy lane and just past Martlesham Boatyard; though I can’t see the river from my door any more I’m only five minutes walk from it. I’ll miss the visitors and sailors who were always popping in to Waldringfield, so do come and see me if you’re around. Best to phone first to make sure I’m there – 01394 549247. 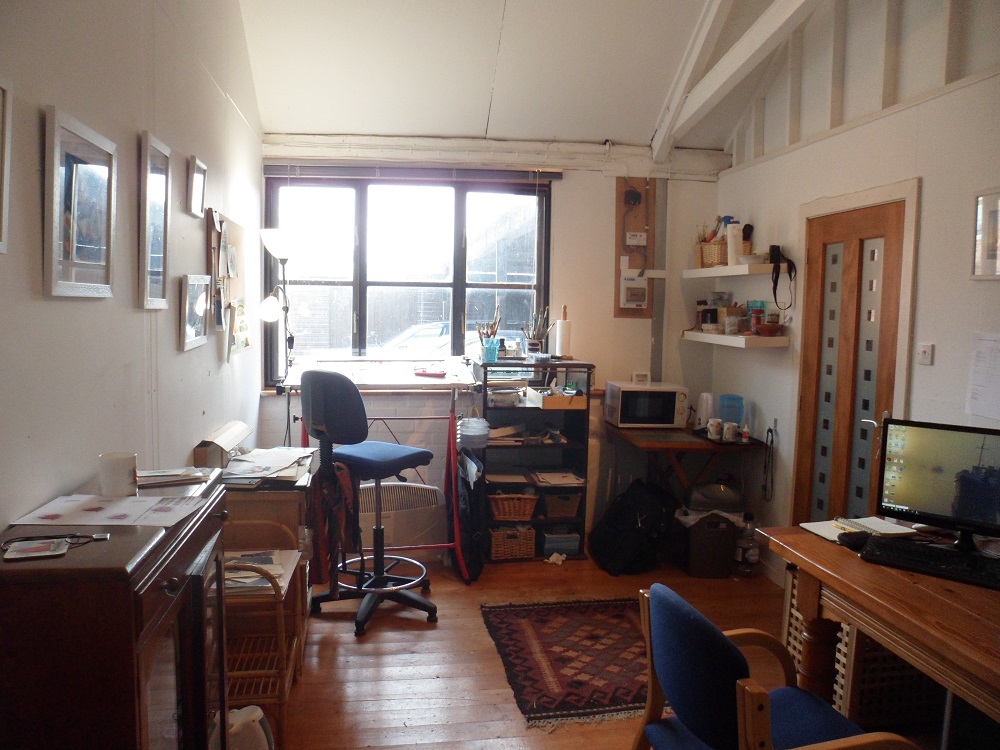 In the meantime, keep on doing what you love doing, as often as you can, whether you are any good at it or not. It’s only way to stay sane!

« The hills are alive…