Sneaking off to sea again

Did I say I was not cruising this winter? I changed my mind, on a particularly chilly and rainy day when an email arrived from the agency asking if any art tutor was possibly free to jump on board Saga Pearl for a 17 day cruise at very short notice. Well….. what would you have done? Luckily, my diary was reasonably clear and a bit of winter sun was an opportunity waiting to be grabbed. We’ve stayed fairly close to home this time – Portugal, Morocco, Canaries and now Madeira, then home. The weather has been pleasant most of the time (in Tangier and Arrecife I was seen to remove both cardigan and socks!) but at Las Palmas in Gran Canaria a storm was brewing so we stayed safe in harbour an extra day whilst strong winds and lashing rain reminded us of home – though thankfully without the sub zero temperatures. Cardigan, socks and waterproof jacket firmly back on I spent a pleasant time in the Christopher Columbus museum, which is a delight. 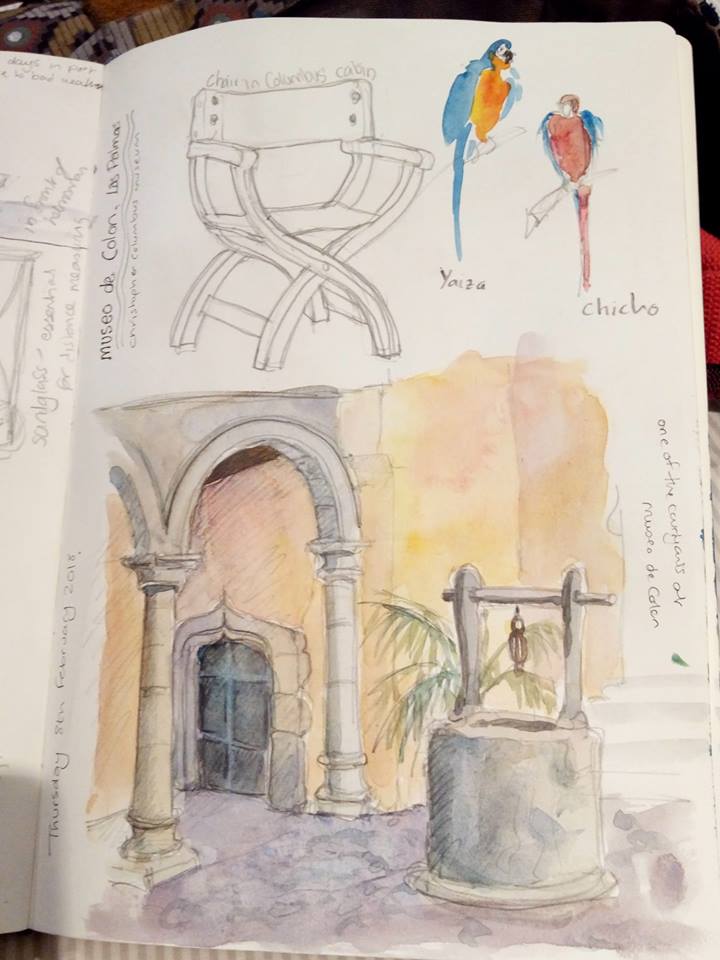 I have a question for you maritime history experts out there. The steering position on Santa Maria and other ships of the period was below decks, a tiller arrangement linked to rudder by ropes and tackles. The helmsman had a compass and also a sand-glass in front of him (essential for both timekeeping and calculating the ship’s speed), but of course he could not see where he was going. My questions are these: how were instructions passed down to helmsman from lookouts on deck? And was there any way of steering from up on deck (steering oar?) when needed? And at what stage in history did ship designers realise that it was rather useful if the man at the helm could see where he was going and move the tiller (later wheel) up on deck? Sensible suggestions welcome! Thank you.

On board Saga Pearl II the captain and officers are of course high on the bridge with an array of electronic instruments that would be the envy of Columbus and fellow explorers. I recommend a book written by Sir Robin Knox-Johnston called ‘The Columbus Venture’ (BBC Books 1991) in which Robin sails across in the Atlantic using only instruments available to Columbus. I won’t tell you where he ends up, that would spoil the story, as it’s a good read. 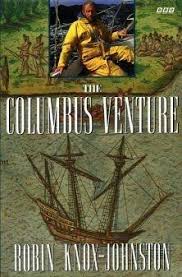 That’s enough about Columbus for now. In the next blog post I’ll tell you why it’s of such interest at the moment (apart from the fact that I love the detail and the human story of maritime history). Meanwhile, the Atlantic rolls by the lounge windows on this little ship with its 450 passengers and nearly as many crew. I always bring plenty of work along to get on with in my spare time, but there was only one deadline that needed my attention and that’s the monthly cartoon for Dave Selby’s ‘Mad about the Boat’ column in Practical Boat Owner. So this morning I sat down to work at the large table in the lounge usually reserved for jigsaws (yes, really), but jigsaws, like other contact sports on board including dancing and bridge, are off limits on board at the moment due to extra hygiene precautions. Norovirus is a cruise ship’s nightmare and there have been some cases on board, so that needed to be stopped fast and efficiently. Amazingly, the poor crewmember who seems to spend his entire day sanitising the handrails on stairs and corridors still manages a cheery ‘Hello Madam!’ every time I pass him.

Sorry, I’m rambling again. The jigsaw table was a good place for me to sketch out and paint the cartoon. I’d already read the piece and spent a couple of days wrestling with an idea, which sort of takes shape as I go. By the time I’d photographed the finished piece with my phone and emailed it to the editor, I’d thought of a caption to go with it. It took a few attempts to get through but thank goodness for ship’s wifi – and how on earth would Columbus have got his head around that!

And in case you were wondering how I managed to get through that first art lesson in the dreaded Bay of Biscay…. Yes, I did feel lousy, and was so doped up on seasickness pills I was barely awake. But the weather was fairly benign, and I had also managed to persuade fellow artist Christine Lester to come with me. Christine and I run the Pin Mill Painting Days together, so our students were getting a double act for the first week, until Christine had to fly home to meet other commitments. Between us we managed the tricky first lesson, after which I hurried back to the cabin, went to bed and fell fast asleep. Fortunately, the next day we both felt fine again, so all was well. That first day is always the hardest. The task of helping a student to open a new paintbox, get the pans of paint out of the box to take off the fiddly paper and cellophane wrappings is an easy job on shore, but when your head is swimming, mouth dry and fingers refusing to function it’s a major challenge!  But sea legs are wonderful things, and as I said, the forecast is looking good and lunch is imminent! (Note the non-slip clingfilm)

4 thoughts on “Sneaking off to sea again”

Ice floes, forget-me-nots and the ghosts of Sutton Hoo »