Ice floes, forget-me-nots and the ghosts of Sutton Hoo

Most of the year people often say to me ‘Oh I wish I lived on a boat’ (to which the answer is usually ‘no you don’t, not really, or you would do’). In the winter months no-one says it. During that very cold weather when the ice floes piled up under my stern and opening the wheelhouse door in an easterly gale made me feel like Scott of the Antarctic, living on a boat was no fun at all and I wished I was still cocooned on a cruise ship somewhere cosy like the Bay of Biscay.

Kind friends took me in on the worst night when I was out of firewood, thoroughly fed up, desperate for a shower and the car was the wrong side of an icy hill. But all things pass, the worst is over and there is plenty for me to do, both drawing and teaching. Pin Mill Painting Days have begun again for small group workshops, there are regular classes in my studio, and a series of talks and workshops filling the diary.

There are some interesting bits of paper on my drawing board and around the studio at the moment – it’s one of those times when I have plenty of projects on the go and all of them are ones I want to do for people I like. 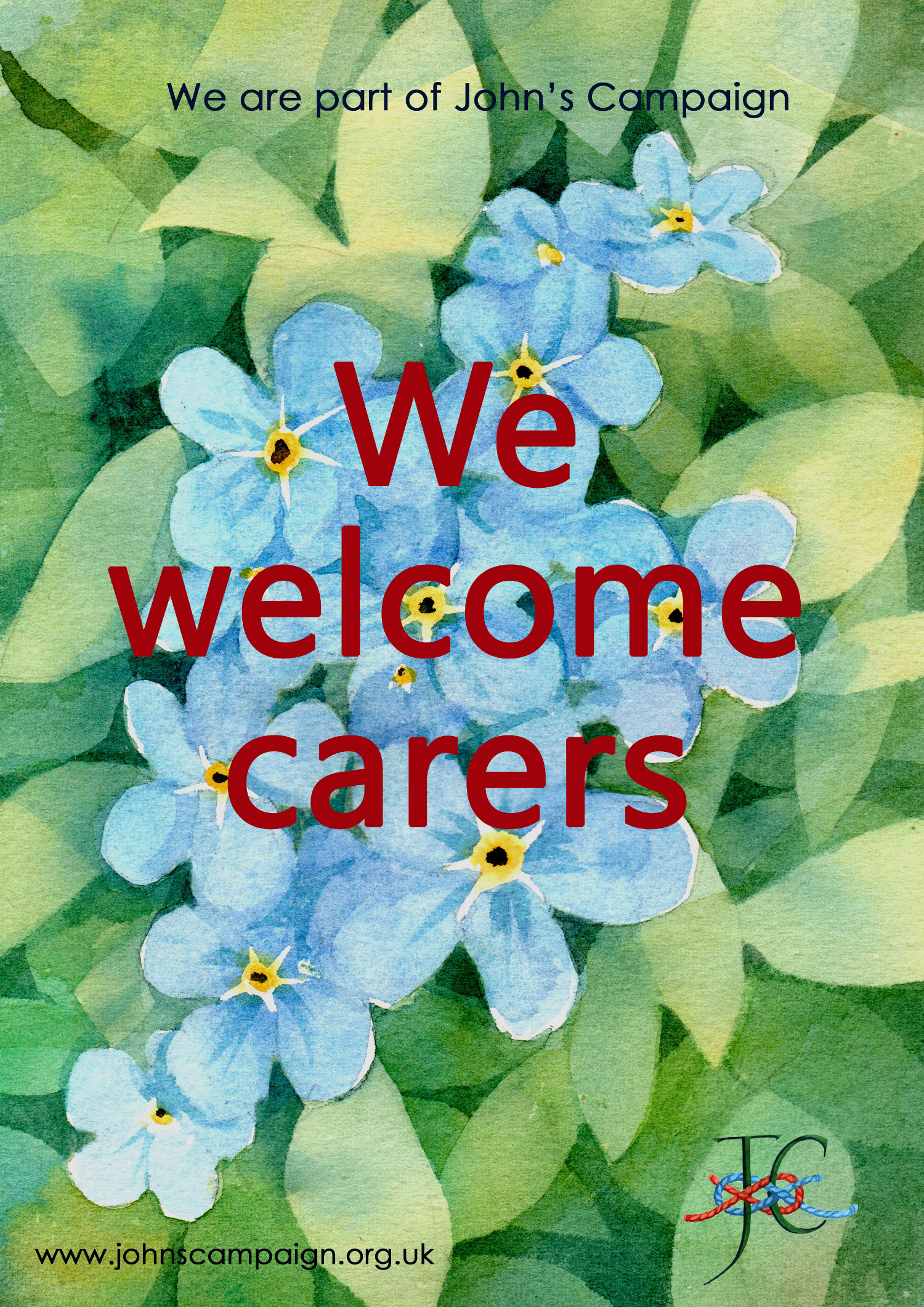 This is a poster for John’s Campaign, for those living with dementia and their carers. Many nursing homes and hospitals now are signing up and needed a poster to show their support. The forget-me-not is a common symbol for dementia charities, so it made a good background for the wording.  (www.johnscampaign.org.uk)

Painting the leaves on the forget-me-not reminded me that negative painting (painting the spaces inbetween things to show light against dark in watercolours) is a useful teaching aid, so I prepared a lesson for my two art classes and scrambled their brains with it. I described it as artistic musical chairs – you paint several layers, missing out more and more shapes each time.

I started with four squares of colour divided by magic tape: 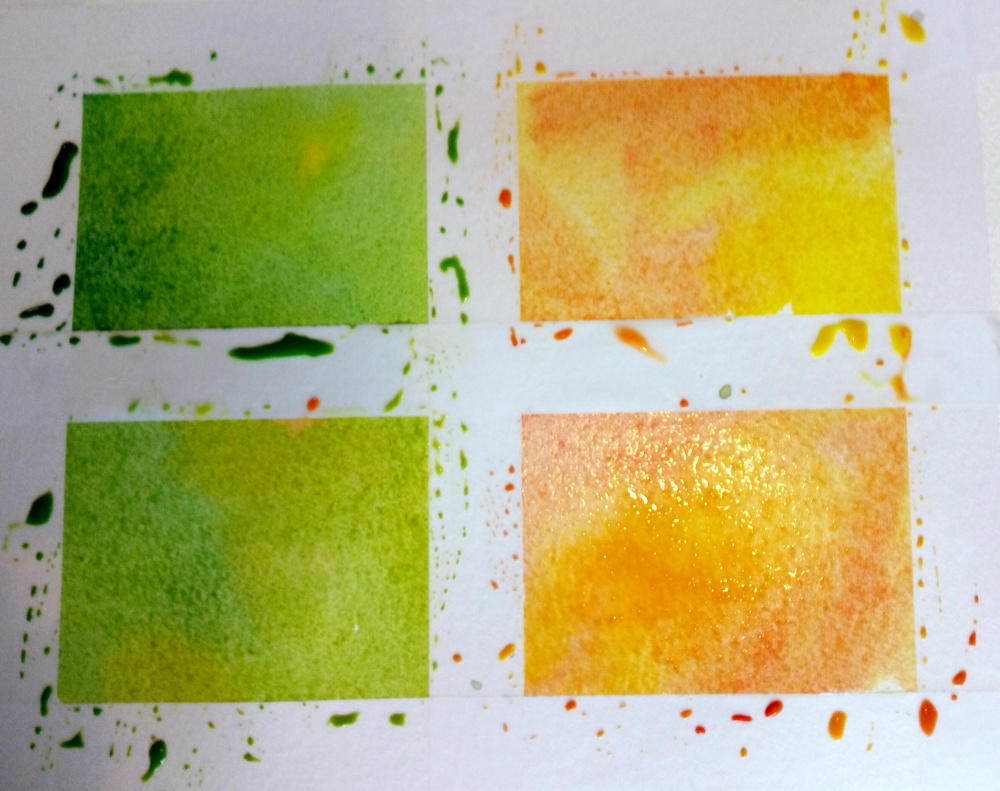 … then started to draw shapes on the squares (leaves or pebbles are good to do). Wait for each layer to dry. Paint the next layer missing out a couple of the nearest shapes. 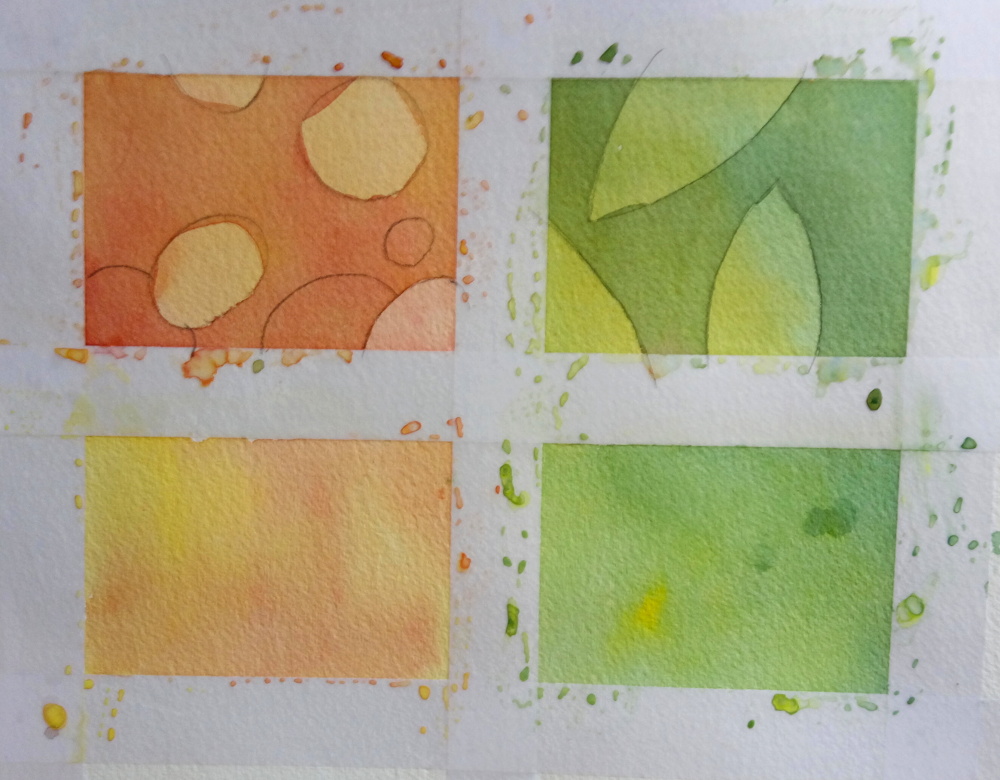 ….. then draw on a few more shapes criss-crossing under the first, and miss those out too on the next wash.

Eventually you get something that looks like this. Hopefully. It can take a while to get your brain to paint the spaces between the thing, not the thing itself. I finished this one off by layering a few very dilute layers of yellow/crimson over parts of the image – ignoring lines and edges – just to get a feeling of light. 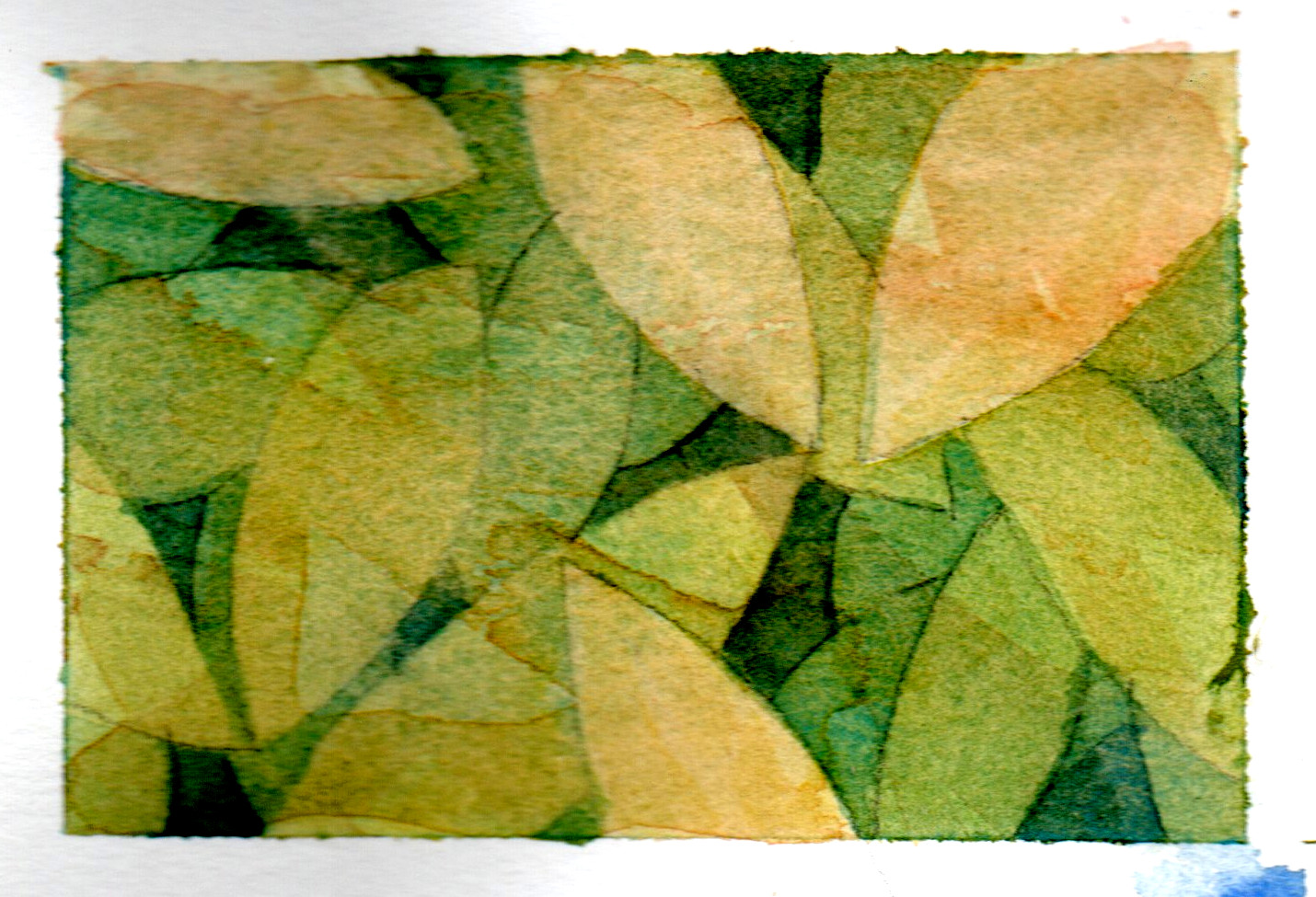 For another project I’ve been digging into Anglo Saxon history and art, as our town is having a festival called ‘The Spirit of Beowulf’ in early May. It celebrates all things Anglo Saxon – the Beowulf narrative itself, and the art, culture and heritage of that time after the Romans left that we used to think of as the Dark Ages and now know to be surprisingly rich in culture and art. From the wheelhouse of my floating home I can see the field where the Sutton Hoo treasure and burial ship were found. Thirteen centuries ago my ancestors dragged their boat, twice the size of mine, over the river bank and up the hill to bury their king, now thought to be Raedwald, the first Anglo Saxon king who unified what came to be known as England.

I’ve been plundering the Sutton Hoo treasure for designs to promote the Beowulf festival. I looked across the river towards the burial mounds and mentally asked permission from all those ghosts; I don’t think they mind. The presence of Sutton Hoo feels benign, though I have to admit here that my grandfather was a fully paid up Welsh speaking Celt and a historian who felt that the Anglo Saxons were just another load of annoying invaders, which of course they were. History was ever thus.

Anyway, enough history, back on the drawing board I’ve discovered that the Anglo Saxons and Celts had plenty in common when it came to art, and trying to interpret some of the intricate designs in line and watercolour has deepened my respect for those early craftsmen who created these lovely things in gold and cut jewels with such accuracy. The visitor centre at Sutton Hoo is well worth a visit (https://www.nationaltrust.org.uk/sutton-hoo). The replicas of some of the treasure pieces are extraordinary, there are beautiful walks in the grounds and I can see my own little ship from the top of the hill. More about the Beowulf Festival at http://www.beowulffestival.co.uk/. 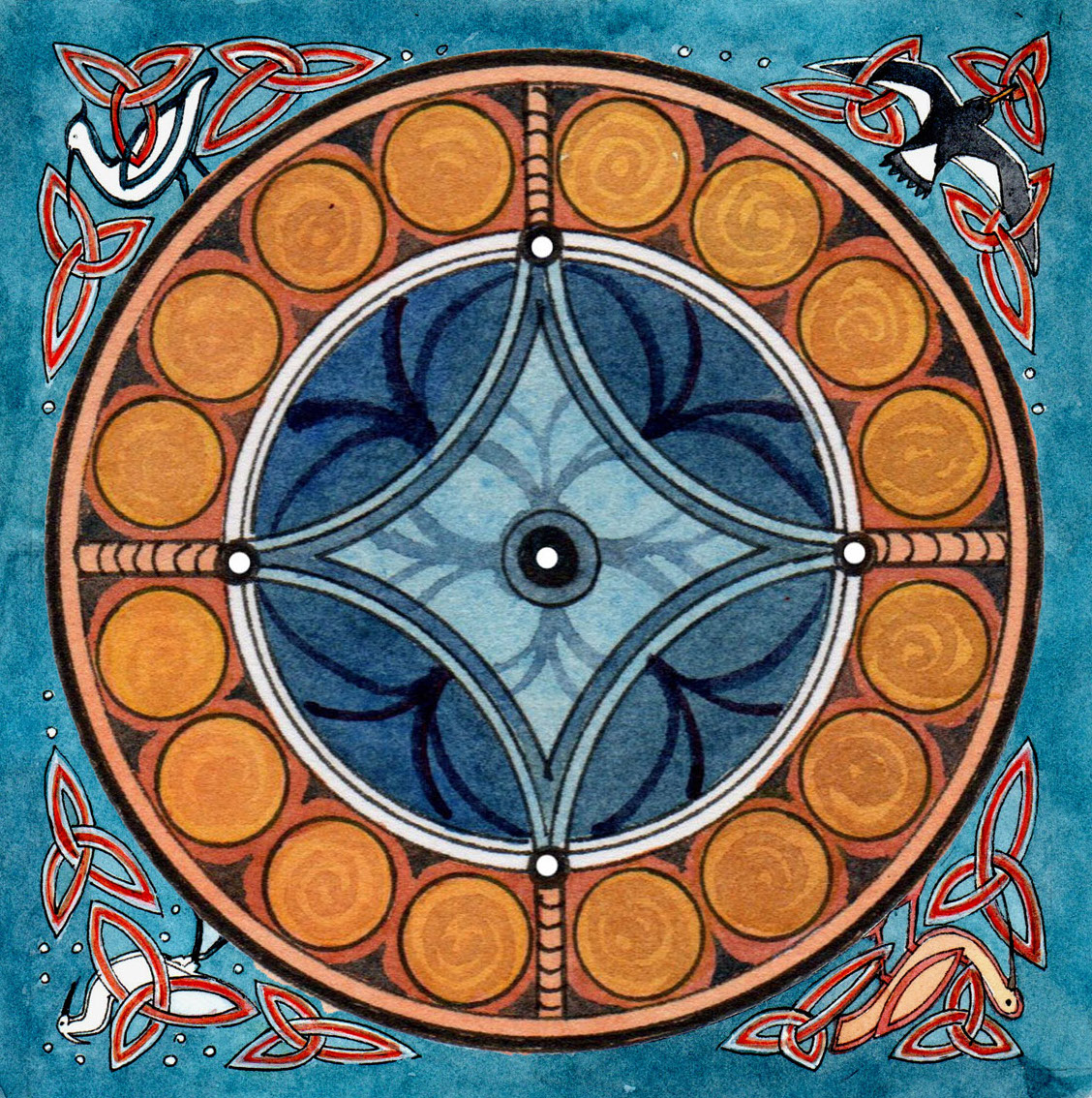 That’s enough for now – I have a studio full of half-finished projects and a list so long I daren’t look at it. But do get in touch, I’m easily distracted!

1 thought on “Ice floes, forget-me-nots and the ghosts of Sutton Hoo”

« Sneaking off to sea again

Home is a river »